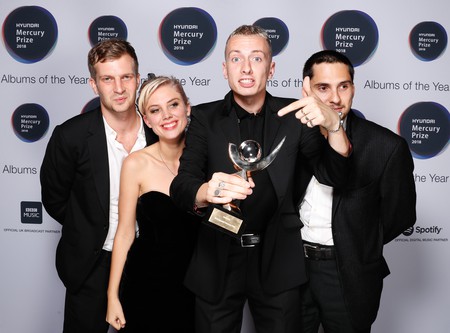 Wolf Alice were the surprise winners of this year’s Hyundai Mercury Prize. The London rockers were a safe choice out of a shortlist of largely mainstream acts, but the awards ceremony needs to once again champion alternative acts if it is to stay relevant.

No one was more surprised than Wolf Alice with their Mercury Music Prize win last night. Frontwoman Ellie Roswell seemed overwhelmed and momentarily lost for words as she went up on stage to collect the award with her three bandmates. Her sense of astonishment was shared by many people in the audience.

Shock winners are part and parcel of the Mercury Prize experience. Who can forget rapper Speech Debelle triumphing over The Horrors, Florence and the Machine and Kasabian in 2009? After 2017’s favourite Sampha won for Process, this year’s was always going to be more of an open field.

While Wolf Alice weren’t rank outsiders for 2018’s prize, they still weren’t the most obvious choice. The Mercurys has always prided itself on recognising overlooked leftfield talent. They’re a classic guitar band who already have two number two albums and two Brit Award nominations – one for best British group this year and another for British Breakthrough Act in 2016. It’s their second Mercury Prize nod too – their debut My Love is Cool was shortlisted in 2015. They may not be as famous as other nominees this year such as Noel Gallagher and Arctic Monkeys but still it’s fair to say they’re established.

Their winning album, Visions of a Life, is their second offering; it’s a genre-hopping LP of grunge, shoegaze, dream pop and post-punk that flits seamlessly between the different styles. It’s expansive, it’s iridescent, it’s a good album. Is it the best album by a British or Irish act this year as the Mercury Prize sets out to acknowledge? That one’s tougher to argue. It comes across more as an album that showcases a band exploring its musical possibilities than a complete work of true greatness.

There were other contenders that felt more in tune with the times, like Nadine Shah. You had to feel for her last night. The favourite to win, she performed “Out the Way” with a fiery determination. Mic wire wrapped around her neck, she stomped from side to side like a matador ready to take charge and even broke down in tears afterwards. Her shortlisted LP, Holiday Destination, took on weighty issues like post-Brexit racism, immigration and mental illness. Sadly, it wasn’t meant to be.

Then there was Sons of Kemet who paid tribute to forgotten women in history with their third album Your Queen is a Reptile, a response to the #MeToo movement. As their two drummers pummelled it out on stage, brass instruments blaring, the cacophony of life-affirming jazz left you dizzy with joy.

Even Lily Allen, who bared her heart and broken marriage on stage with a performance of “Apples”, would’ve made more sense. Her album, No Shame, was an emotionally bracing and accessible collection of pop songs brimming with tender vulnerability. It felt like her most fully realised yet.

It’s been an incredible night of performances at the 2018 Hyundai Mercury Prize! Who was your favourite? ✨ Swipe to check out more! #HyundaiMercuryPrize #MercuryPrize

The Mercurys aren’t just about winning an award though. There’s the £25,000 prize money and the recognition. Even to make it onto the shortlist can be a huge boost to smaller acts. This year Sons of Kemet received the biggest increase in sales, according to the Official Charts Company, with a rise of 38.3%.

Rock’n’roll isn’t dead. Not by a long shot. But afrobeat, grime and electronica have been steadily taking over for the past few years. There were some truly exciting and innovative albums that didn’t even make it into the shortlist this year by bands like Let’s Eat Grandma, Sophie and Bicep. Even Wolf Alice, in an interview before the ceremony, admitted that guitar bands were struggling to make an impact in the charts. It seems that, after Sketpa’s win in 2016 for and then Sampha’s victory last year, the Mercury Prize has taken a backwards step into the warm glow of rock nostalgia. The awards show needs to stop pretending to be the Brits and do better next year.