They say man’s best friend is a dog, and this was certainly true of William Hogarth and his beloved pug, Trump. We take a closer look at the famed English painter and satirist’s self-portrait with his pet which is on view at Tate Britain.

Possibly one of the oldest dog breeds in the world, the pug was the dog of choice for Chinese emperors and has apparently existed in China since 700 BC. The breed found it’s way to Europe after the Dutch started trading with China, soon becoming the dog to the House of Orange and a favourite among European nobility.

As well as making perfect companions, they were also good guard dogs, often used by the military. Their loyal and trustworthy disposition made them the choice of emblem for a Masonic society in Bavaria: The Order of the Pug. During initiation, new members were given a dog collar to wear, had to scratch at the door to be let in and were barked at loudly by other members to determine their self-restraint. 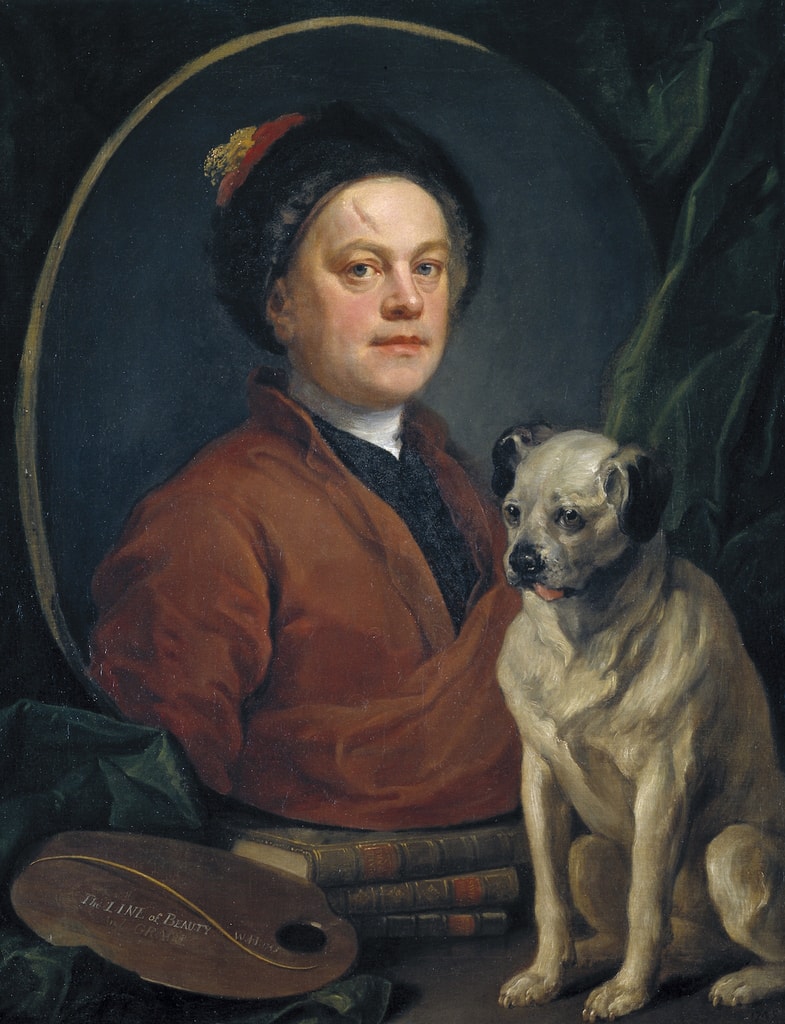 In his 1745 self-portrait, The Painter and His Pug – today on view at Tate Britain – William Hogarth included many symbolic aspects that were reflective of his inspirations as well as of his character and his artistic sensibility. On an unframed oval canvas, Hogarth portrays himself in casual attire as opposed to the wig and formal coat he initially conceived, which was revealed by an X-ray of the painting. Propping the oval canvas up are three volumes of authors who influenced him; Shakespeare, Swift and Milton appealed to Hogarth’s dramatic and satirical leanings. Here, Hogarth parallels the art of painting with the art of words. An inscription upon his palette reads: ‘The Line of Beauty and Grace’, relating to his theories of art that he formalised by 1753 in The Analysis of Beauty. But the most notable addition is that of his favourite pug, Trump.

Hogarth included pugs in many of his works. In his portrait of The Strode Family (1738) (also on view at Tate Britain), two dogs feature in the painting, flanking the left and right corners. At Colonel Strode’s feet sits a pug, not too dissimilar to that of Trump in Hogarth’s unusual self-portrait that is composed more like a still life (or a nature morte). The pug also takes centre stage in Hogarth’s earlier painting, The Wollaston Family (1730). And they appear in numerous engravings, even a reworking of this self-portrait that satirises Charles Churchill called The Bruiser (1763) which is in the British Museum’s extensive print collection.

Pugs, or the Dutch mastiff, as they were sometimes referred to, had become popular in the 18th Century. Goya had painted them, and any Princess or aristocratic lady worth her salt was painted with one sat on her lap. And it would seem Hogarth was taken by them, having owned a number in his lifetime.

In 2001, Jim Mathieson’s sculpture of Hogarth was unveiled in Chiswick, near his former home. Hogarth stands astride in painters smock with palette and brushes in hand and at his feet is his trusted companion, a pug. Some 250 years earlier, Hogarth’s friend and celebrated French sculptor, Louis-François Roubiliac, made a sculpture of Trump, following his terracotta bust of Hogarth that is on view in Room 10 of the National Portrait Gallery. Porcelain versions (one of which can be seen at the V&A) of Roubiliac’s original rendition of Trump were subsequently made by various potters to be sold to Hogarth’s admirers.

Having copies made of artworks in various media was a common practice. As with many of his paintings, Hogarth made an engraving of his self-portrait so it could be mass produced and sold to his many avid followers for far less than the original.

As you would imagine for a man who successfully immortalised the stink and depravity of Georgian London in witty satirical engravings and paintings, William Hogarth considered himself – and was indeed seen – to have a pugnacious character, therefore the inclusion of Trump is essential in representing his temperament (and, if some theories are to be believed, his connection to the Freemasons).

He is said to have often likened himself to his pet pugs, which artist Paul Sandby took literally when he depicted Hogarth as half pug in his satirical engraving, Puggs graces etched from his original daubing (1753). Elizabeth Einberg and Judy Egerton point out in their book The Age of Hogarth: British Painters Born 1675–1709, that Hogarth ‘was apparently fond of remarking on the resemblance between himself and his dog and probably saw in it something suggestive of his own notoriously pugnacious nature.’ It also without doubt symbolises the importance of this domestic animal that Hogarth would elevate it to be on the same level as the artist himself.

William Hogarth’s The Painter and His Pug is on view at Tate Britain in the 1730 gallery. And if you want to see more of William Hogarth’s work and a sculpture of his dog Trump, then visit his former residence, Hogarth’s House in Chiswick, London.

Want to see more art in London? Then why not book one of these forthcoming blockbuster exhibitions in the capital.