Why You Should Head to Queen's Instead of Wimbledon 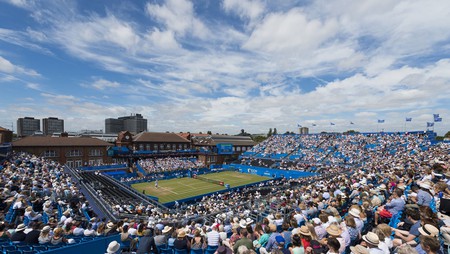 Why not watch the Queen's Club Championships instead? | © Mike Frey / BPI / Shutterstock / REX

Every summer, thousands flock to Wimbledon for tennis’ most prestigious tournament. But, just a few miles away, it’s possible to watch exceptional matches, away from the crowds and at a fraction of the price.

Held every June in West Kensington, the Fever-Tree Championships – better known as Queen’s Club, or simply Queen’s – is an annual event that makes up part of the men’s Association of Tennis Professionals (ATP) tour. Seen as the ideal warm-up tournament ahead of Wimbledon in July, as players transition from the French Roland-Garros tournament and the end of the clay-court season, it attracts huge names looking to sharpen their serves and re-familiarise themselves with the speed of grass-court tennis. 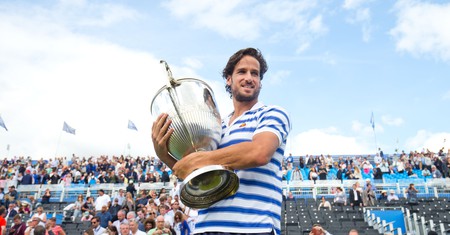 Just a quick run-through of some previous winners – Andy Murray, Rafael Nadal, Lleyton Hewitt, Andy Roddick and Pete Sampras – confirms its prestige. Go back a little further and tennis legends Boris Becker, Ivan Lendl, Jimmy Connors and John McEnroe dominate the list of winners. Without the overpriced strawberries and insistence on competitors wearing white, this event can simmer under the radar of the casual tennis fan.

The major difference between the two tournaments is the price. Tickets for Queen’s can be bought through the club’s official website and start at £30 for general admission. Understandably, this increases for tickets on its main show court, as well as for more premium seats. However, they remain a fraction of the price of those of its more famous sibling; a seat to the final at Queen’s starts at £120, a full £90 less than the men’s final on the last day of Wimbledon. At Queen’s, that £90 would be enough to get you tickets to the first three days’ play, on top of your ticket for the final.

What’s more, while the three other Grand Slams sell their tickets online, Wimbledon maintains an archaic formula that they pass off as traditional rather than simply outdated; using an elaborate combination of Ticketmaster, public ballot (where anyone wanting a ticket has to post a stamped, self-addressed envelope to the club in the hope they get picked at random), hospitality and the famous queue.

Sold as part of the quaint British charm of tennis’ grandest showpiece, Wimbledon’s seeming obsession with queuing sees people pitching up tents overnight in the hope of securing a half-decent ticket the next day, transforming the local park into a campsite for two weeks every year. There is no need to set an alarm for the morning, because a steward wakes everybody up at around 6am, instructing them to pack away their belongings and join a new queue. Numbers can reach 10,000 per day, far greater than the number of tickets available, and even the capacity of the site itself. Members of the queue are even given a 29-page guide, explaining everything from what wristbands to wear and what foods you’re not allowed to eat, to the restrictions of ‘temporary absence’ (that is, leaving your space to go to the toilet). 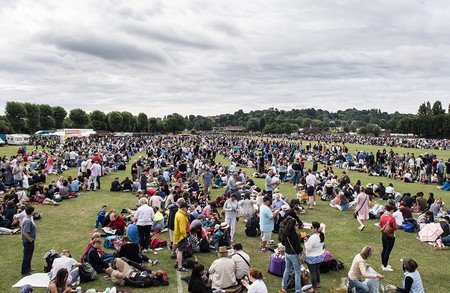 Numbers in the queue at Wimbledon can reach 10,000 people per day | © James Gourley/REX/Shutterstock

Philip Brook, who is chair of the All England Lawn Tennis and Croquet Club and heads up Wimbledon, insists that the system is the club’s way of doing everybody a favour. Perhaps it is felt that the general public should count themselves lucky that they can wait in line for hours in the hope of catching a glimpse of some mixed doubles in the dwindling light.

Queen’s also doesn’t have a debenture system. At Wimbledon, 3,500 debenture holders, paying £50,000 a pop, are guaranteed Court One/Centre Court seats for five years at a time and can renew their debenture when it’s nearing its end. Only if they decline does it then get offered to somebody else.

Away from the debentures, campsites and ballots of Wimbledon, Queen’s offers top players, on greener courts, for less money, with smaller crowds, and without the need to pitch up a tent (maximum two persons, obviously, as per the guide) in a public park the night before.

Among the players themselves, there is a widely held belief that the courts at Queen’s are even more immaculate than Wimbledon’s famous grass. The tournament is smaller and shorter, meaning that later rounds are played on courts that are just a week old, rather than the dusty yellow grass seen during Wimbledon’s latter stages. While SW19’s famous foliage is talked about across the world, very little of it is actually left when the trophy presentations are made.

The courts also provide a sterner test for the players, with a grass composition that makes the ball travel faster than Wimbledon; only Halle (a similar-sized tournament in Germany, held on grass, at the same time of year) offers more speed than Queen’s.

The club has 27 grass courts, as well as some indoor ones, squash and real tennis facilities. With fewer courts and smaller stands, the atmosphere is far more intimate than at Wimbledon. Temporary stands are erected for the tournament to accommodate the bigger crowds, and players use the outer courts for practice, meaning fans get fantastic access from just yards away if they want to watch the players prepare.

The major caveat to all of this is that there’s no women’s tennis on show. That said, during the same week as Queen’s is Eastbourne, which has men’s and women’s play and is even more affordable than Queen’s, at £20 for a day’s general admission.

Perhaps it’s time to temper the Wimbledon hype. Of course, the sport on show is spectacular, but factor in some context. In what other world would someone camp to queue, pay and sit on a hill to watch a large TV, rather than simply watch a TV in the first place? And that’s before you factor in the advantages of having a fridge, electricity and your own toilet.