Why Carnaby Street Will Always Be London’s Menswear Fashion Destination 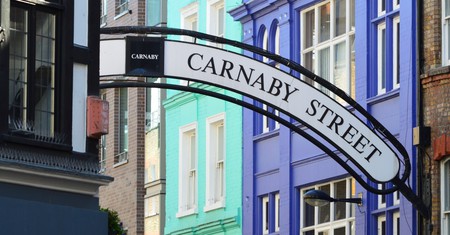 Carnaby Street, which shot to fame in the Swinging Sixties with the help of The Rolling Stones and Jimi Hendrix, is London’s original fashion destination for men. A collective drive to innovate is attracting cool young labels as well as global flagship brands to the district’s cobbled lanes, and keeping its heritage relevant.

Carnaby Street, just a stone’s throw from Oxford Circus, on the edge of London’s Soho, offers an eclectic mix of fashion and lifestyle shops, a curated version of the great British high street.

Full of colour, history and characters, the network of pedestrianised streets, lanes and courts, which most Londoners refer to collectively using the name of the shopping district’s main thoroughfare, attracts the kind of man who’s looking for a retail experience quite apart from the madness of neighbouring Oxford Street.

Luxury menswear retailer END. opened its first London store in the district in October 2018. “We wanted to bring our online store to life in a physical London space,” says Kenny Edwards, the flagship’s manager. “There’s a real sense of community here and I think that’s down to the amount of standalone stores and independent businesses that operate in the area.

“Location was the most important thing for us and the creativity of Carnaby Street and Soho, as well as the calibre of menswear brands here – Oi Polloi, Supreme, Red Wing – all appeal to a menswear customer who is considered in his fashion choices.”

END. joins a long list of edgy clothing stores that have chosen Carnaby Street. When designer John Stephen opened his first clothing shop, His Clothes, here in 1957, he inspired a new take on London style. Stephen’s designs were outlandish and innovative, spanning everything from brightly coloured printed shirts to mini-kilts. 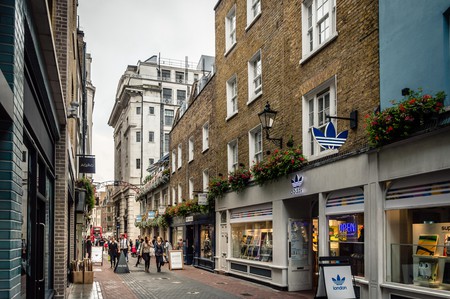 “Young men wanted to wear these clothes and they had the money to buy them, but no one seemed to want to make the clothes for them,” Stephen, who died in 2004, told US publication Toledo Blade in 1965. “That’s when I stepped in. I took a small room in Soho, bought some fabrics I had faith in, hired a sewing machine, got a machinist, designed some clothes and, well, I was away.”

The launch of His Clothes came just two years after Mary Quant opened her womenswear boutique, Bazaar, in Chelsea, at a time of liberation and hedonism for London’s youth culture. Indeed, during the Swinging Sixties, which these two designers helped dress, men and women began to experiment with silhouette, colour, print and hemlines, celebrating a newly accepted freedom of expression.

By the mid-1960s, Stephen had over a dozen shops in the area, earning him the unofficial title of the King of Carnaby. They were joined by the likes of mod boutique Gear, Kleptomania, which sold just about everything so long as it was weird, and Lady Jane, the womenswear store that got the whole town talking with its live window displays.

This limitless creativity attracted an artistic crowd; The Rolling Stones, The Beatles and Jimi Hendrix were all regular visitors.

“Carnaby has reinvented itself throughout the decades, with both mods and punks calling the area home,” says Samantha Bain-Mollison, head of retail at Shaftesbury, the company that owns the district. “It has never lost its reputation as a trend-led hotspot and its influence has grown. It’s now home to a mixture of unique boutiques and global flagship brands.” 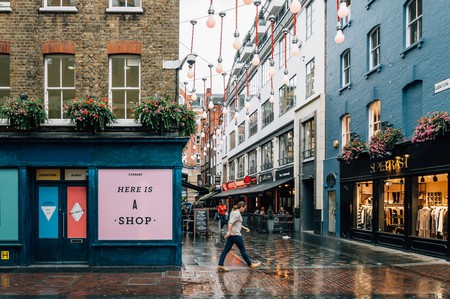 Menswear tailor Mark Powell has experienced its evolution since the 1990s, when he first brought his label to the area. Powell is a strong believer that brands should move with the times, but he prides himself on representing an element of Carnaby’s past. “It has a history built on menswear,” he says. “It has great links to music and I like to think we’re a bit rock’n’roll. I feel we offer a contemporary take on tailoring but that we still embrace the history.”

Thankfully, Carnaby Street hasn’t lost itself in its heritage; brightly painted buildings, cobbled streets and shops the size they used to be before the arrival of the megastore may make visitors feel a little nostalgic, but there’s a modern edge to the place, a taste for the new, that keeps it special.

“Sixty percent of boutiques are one-off stores and we travel the world to find new, interesting and exciting concepts that can’t be experienced elsewhere,” says Bain-Mollison. “We always ask brands to ensure their store has a point of difference.”

This drive to be different has re-energised the district, which, like every high street in the land, took a hit during the last recession.

“The change has been incredible and I really like what’s happening,” says Powell. “It’s constantly evolving and cooler brands like END., which places focus on customer experience, positioning interactive digital screens throughout the store, are joining the community; the place has a lot more soul than it did 10 years ago.” 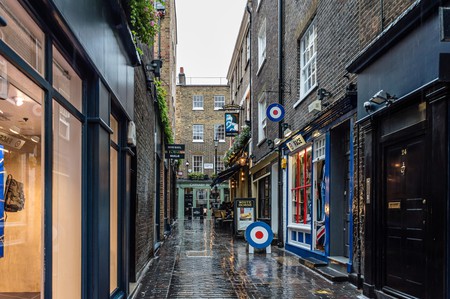