The Best German Restaurants In London

The rise in popularity of Bavarian cuisine has meant that London is certainly not starved of places to find the best of German brewing and cooking. We’ve compiled a list of London’s best German beer and food joints guaranteed to provide you with a simple, perfectly balanced beer that characterizes the humble German pint, as well as homely and refined rural dishes typical of the much-coveted Bavarian menu. 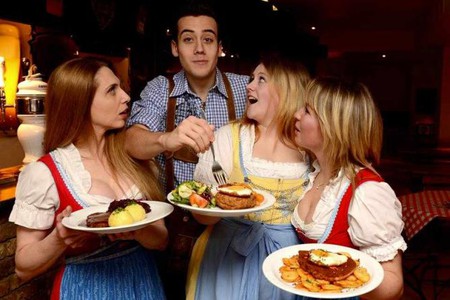 Restaurant, German
Facebook
Email
Twitter
Pinterest
Copy link
Share
Map View
Bavarian Beerhouse is proud to be the original German beer house in the UK. It started when Rene von Reth of Essen left Germany for London in 1994 and couldn’t find one single German beer merchant. In 2005, he set up his first branch of Bavarian Beerhouse in Old Street. The company has since expanded and in 2010 Bavarian Beerhouse Tower Hill opened. Both branches have a weekly schedule of entertainment and food deals. For example, on Fridays and Saturdays they hold an ‘Oktoberfest’ party with a live DJ. Bavarian Beerhouse is a somewhat delightfully cheesy take on German dining; the menu offers pretzels, sausage platters and goulash, and the drinks menu consists of German beers, shandys, wines and cocktails. The spirit of the establishment however is ultimately evident in their ‘Beer Xtras’, which lists such things as a 6-pint glass (which requires a £60 deposit) and the Krombacher Steifel – 1.5 litres in a famous German boot-shaped glass. Bavarian Beerhouse is a fantastic venue for parties, work events and celebrations, after all they are a self-proclaimed ‘all year round Oktoberfest.’ There is no better place to be in London for over-the-top Bavarian-based fun.

Stein's Kingston | Courtesy Stein's Kingston
Hidden away in an inconspicuous hole-in-the-wall in London Bridge, Katzenjammers is an underground (literally and figuratively) establishment offering the best of German cuisine, beer and live music that completely polarizes its low-key outer appearance. At any time, they offer a selection of nine traditional German beers as well as the occasional seasonal guest beer. They also have a bottled beer menu of over 25 varieties, and a selection of German and Austrian wines for those who can’t be tempted by a good brew. The bierkeller is also a functioning and successful restaurant, offering the traditional cuisine Germany is famous for, such as fresh pretzels and schnitzel. The flagship of the menu is undoubtedly their selection of German sausages, including bratwurst, paprikawurst and brockwurst, which can be served in a bun, in a platter or with pomme frites. If this isn’t enough to tempt, they also feature live music from the legendary Oom-Pah Brass on Friday nights, turning this lively and vibrant establishment into an energetic hub of German-based entertainment. 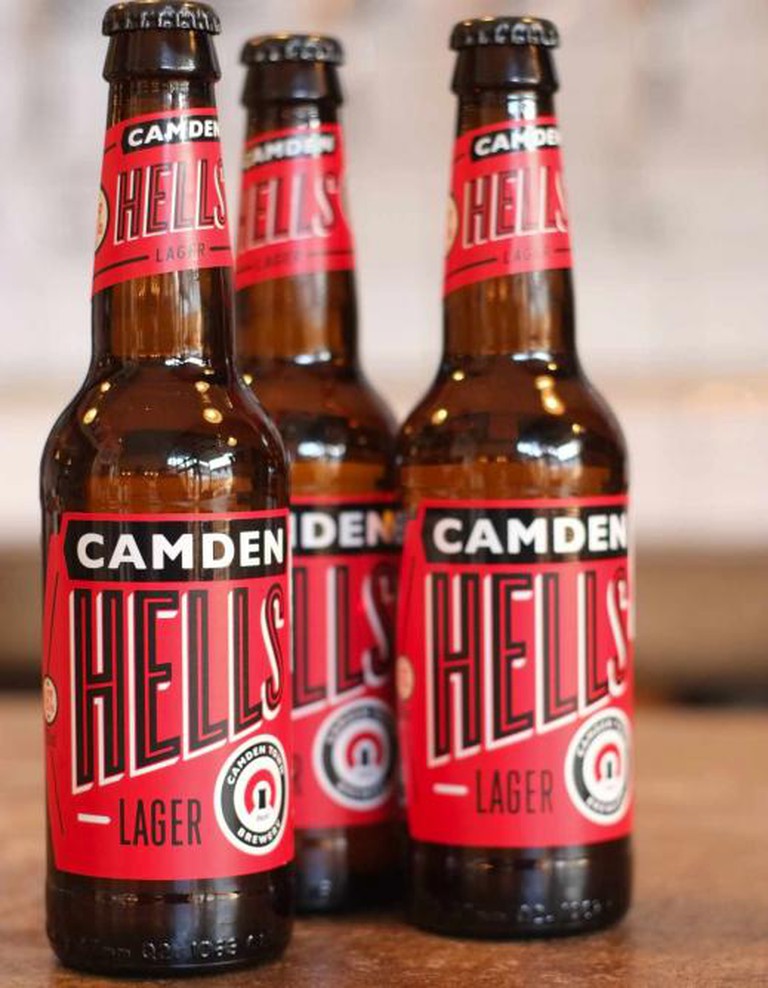 Camden Town Brewery's Hells Lager | Courtesy Camden Town Brewery
If Bavarian food has never been associated with fine dining before, it is now. Dubbed ‘The Bavarian Experience’ in Kingston, Stein’s bar, restaurant, and biergarten sits comfortably on the promenade overlooking the Thames River. The establishment is charming, and the ‘German-ness’ is so authentic, they even hired German-Polish company Adamski Construction to design and build the rustic traditional interiors. During the day, Stein’s offers homemade cakes and sweets and authentic Bavarian cuisine with menu categories such as ‘Straight from the vegetable garden’ and ‘It’s all about sausages’. They even recently released a unique cocktail menu and claim that after 10pm on weekends the nightlife really starts. Their enchanting biergarten is the perfect place to enjoy a cocktail, refreshing beer or glass of wine, all sourced from the owner’s Bavarian roots. The food here is understated, delicious and perfectly presented, and the one-of-a-kind location allows for an atmosphere that will keep you coming back – a true gem of Bavarian dining. 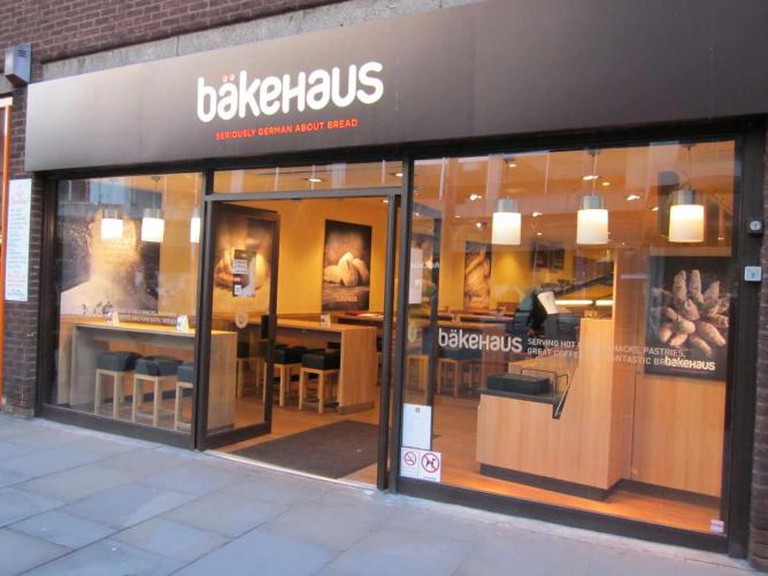 Bakehaus, Hammersmith | Courtesy Bakehaus
Camden Town Brewery’s hallmark right now is their new Hells Lager, a German-inspired beer whose popularity and fame is growing rapidly throughout Central London. Though not technically a German establishment, with this new beer the bar is bridging the gap between German manufacturing methods and the decidedly eager London market. They use a German Lager derived strain of yeast, which, for their Unfiltered Hells, they don’t filter out at the end, making this beer their version of a traditional kellerbier. The result is a supremely drinkable beer that is accessible to British drinkers. This beer would be a great starting point for beer-beginners, or those attempting to develop a taste for traditional brewing.

Bakery, Fast Food, Vegetarian
Facebook
Email
Twitter
Pinterest
Copy link
Share
Map View
Bäkehaus is exactly what you’d expect and want a German bakery to be. Upon entering, you are presented with a vast wall filled with wonderful-smelling pastries such as Berliner doughnuts, huge vanilla cream turnovers, pecan slices and Danish pastries, soft pretzels, cheese and spinach borëk and, of course, their lovingly created German bread. Their website claims that ‘In Germany, bread is more than just food – it is a part of [the] culture.’ Indeed, the selection of breads is wide and includes baguettes, rye bread and mixed rye and sourdough loaves. Their breads are made from specially selected grains and seeds with absolutely no pre-mixed flour. The bread is proudly German and made with real German ingredients and techniques. They also serve an extensive range of German snacks such as Schnitzel, Fleischkäse and Bratwurst as well as sandwiches and pizza slices. The prices are more than reasonable, and the food delicious – this genuine and enjoyable bäkerei is guaranteed not to disappoint.

Bakery, German, $$$
Facebook
Email
Twitter
Pinterest
Copy link
Share
Map View
Arguably the most authentic establishment on the list, Kampsappears to be a simple bakery in the heart of London, although it is a genuine leading German bakery business on a mission to bring German fine baking tradition to modern London. Their website claims that Kamps Bäckerei ’aims to offer Londoners affordable luxury and a balance between new choices and old flavours.’ Indeed, their menu, comprised of hot and cold sandwiches, authentic German cakes and pastries and bread of a decidedly European genesis, bridges a gap between the typical London consumer and premium, fresh German baking. The bakery is a self-proclaimed ‘event bakery’ where customers can look directly over their baker’s shoulders as they prepare fresh the dishes of the day. This is a bakery that absolutely represents the ‘freshness and craftsmanship’ on which they pride themselves.
Give us feedback