What’s On at Notting Hill Carnival

August is nearing its end and that means one thing and one thing only in Notting Hill: it’s carnival time. Expect loud cheers, ceremonial spears and plenty of beers (Red Stripe is a carnival favourite) as revellers bounce to the beat, jerk chicken in hand. Join over one million people descending on West London to celebrate Caribbean culture in what has grown to become the largest street festival in Europe. If, for whatever ungodly reason, carnival doesn’t sound appealing, check out this guide to what else is going on this August bank holiday.

First held in 1966, Notting Hill Carnival has been around for over 50 years. Post-Second World War reconstruction in Britain saw an influx of immigrants from all corners of the former colonies, particularly from the Caribbean. The migrants sought work; Britain sought workers for an array of new public services, including transport and health. It was a match made in heaven – until the race riots of the late 1950s devastated race relations in the capital. Notting Hill Carnival evolved as a solution and, by promoting cultural diversity, it has been instrumental in helping to bridge racial divides in Britain. Read our guide to the fascinating history of the carnival to find out more. 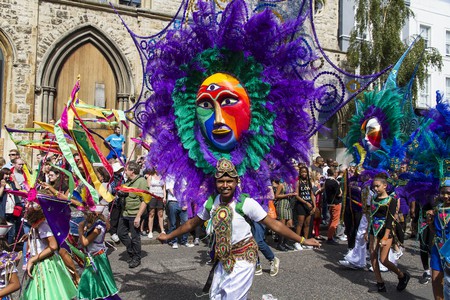 Notting Hill Carnival has traditionally been held on the last Sunday of August, generally known as the more family-friendly day, and the bank holiday Monday the following day. However, for the first time ever, the carnival is spread across the entirety of the bank holiday weekend, beginning on Saturday evening.

Prepare to see more people than ever before, with expectations that the number will be nearing the two million mark this year. Families heading into carnival on Sunday should catch to the Children’s Parade, which gets going around 9am. Besides the weekend’s parades, there will be 10 steel pan bands, an assortment of nearly 40 sound systems, and 70 stages exhibiting some of London’s incredible musical talent. Sound systems will be playing everything from reggae to rock’n’roll – our favourites are Red Bull Music Academy, Channel One, and Disco Hustlers. While most of the local stores shut up shop for the day, there will be an array of approximately 300 food stands serving all kinds of Caribbean fare. 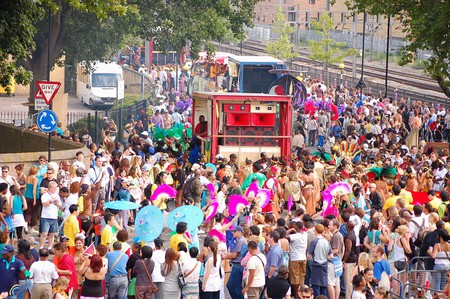 Saturday is an evening affair, with steel band performances around Emslie Horniman Pleasance Park from 6pm to 10pm but Sunday and Monday are a different story. As things wind down by 8pm, it’s best to get in to West London around midday. All of the local streets will be packed and it could take a while to get into the centre of things, especially for anyone looking to find a particular stage. Be careful not to leave it too late, otherwise the parades might have all gone past and, no matter how much fun the carnival atmosphere is on the whole, the parade is pretty much the whole point.

Daring folks might head to stations at the heart of the carnival like Westbourne Park or Ladbroke Grove but these (and the trains on the way there) are likely to be crushing cesspits, even more unbearable if it’s a hot day. Then there are stations on the peripheries of the road-close boundaries like Notting Hill Gate, Holland Park, Queensway, Bayswater and Royal Oak – still audacious choices, but people doing this are more likely to survive. Anyone looking for the path of least resistance will find that the best option is to get off the tube at Shepherd’s Bush and jump on a bus up towards Notting Hill Gate. 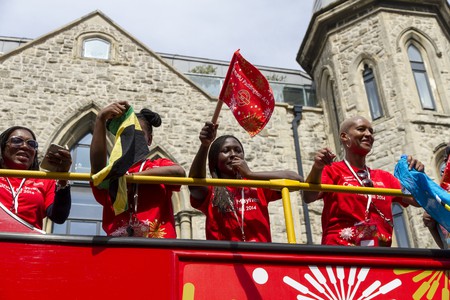 Cash. Cash. Cash. Whatever you do, do not forget to bring cash, otherwise there’ll be no curried goat, no jerk chicken, and no more drinks for those who run out. Perhaps worst of all, those without money will be forced to queue for the public portaloos. Meanwhile, those with cash can buy their way into somebody’s home to use their toilet, usually just for a £1 or £2. If someone is offering this, it’ll be obvious – don’t go annoying the locals by knocking optimistically on random doors. Besides cash, make sure to take drinks, dress wild and, perhaps most importantly, some hand sanitiser because things will get messy. Something warm to wear for the evening could be great too.

Once the festivities are drawing to a close, various after-parties are guaranteed to spring up all over the capital. Ministry of Sound in Elephant and Castle will be hosting the official carnival after-party on Monday and it’s likely to be packed out. A range of other clubs, including the likes of Big Chill House in King’s Cross, The Nest in Dalston and XOYO in Shoreditch, have been known to open its doors for some heaving post-carnival shenanigans.