'What The Hell is That?!' – Say Hello to the Geoduck 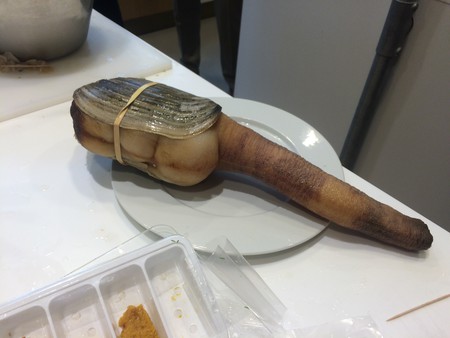 They look like a huge armoured penis, can grow up to 20cm (8 in.) in length and weigh over a kilogram (two pounds); say ‘OMG’ to the geoduck.

There’s no getting away from it, your average geoduck (pronounced gooey duck) looks like, well, a giant armoured penis. These unusual molluscs, the largest in the world, are traditionally found in the clear, clean Pacific waters off the coast of Canada’s British Columbia.

They’ve not been that readily available in the UK, until now, and at a recent trade event organised by the Canadian High Commission, top Canadian food writer and chef, Nathan Fong, was on hand to demonstrate how to cook this unusual ingredient. 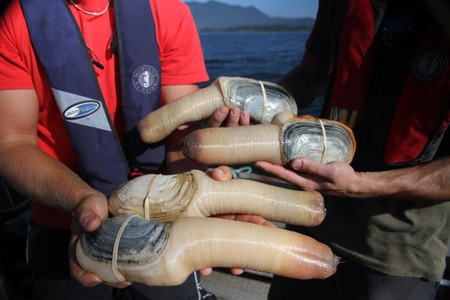 How to cook and eat geoduck

Perhaps the region that appreciates the geoduck the most, are Asian countries such as China and Japan, where they go by the name of elephant trunk clams. Here the flesh is served, spanking fresh, as sashimi and dipped in a blend of soy and ginger.

They have a sweet briny taste, and the trunk end, or syphon, in particular has a distinctive crunch to it. Other culinary treatments could include ceviche, while a more conventional treatment is to use the meat in a traditional seafood chowder along with potatoes, corn and onions. In China, they are often used as the centrepiece in a wedding banquet, where their reputed aphrodisiac effect is much in demand.

So proud is Canada of this unique delicacy found off its coast, that it was even served to William and Kate during a Royal visit last year.

‘They’re all collected by hand,’ says James Austin, President of the Underwater Harvesters Association, a non-profit association that represents 55 geoduck and horse clam fisheries in British Columbia. The divers use a water jet called a ‘stinger’ which allows them to be carefully removed from the sea bed and up to the waiting boat, where they’re sorted and packed. Freshness is the key to a good geoduck, and a specimen harvested on Monday in the Straights of Georgia would be packed in Vancouver the same night and on a flight to Hong Kong on Tuesday morning.

If there’s one thing London chefs like, it’s getting to play with new, unusual ingredients, and the geoduck’s arrival in London is just the latest chapter in their story. To paraphrase the old rhyme about oysters, ‘the bravest man the world ever saw, was he who first ate a geoduck raw.’