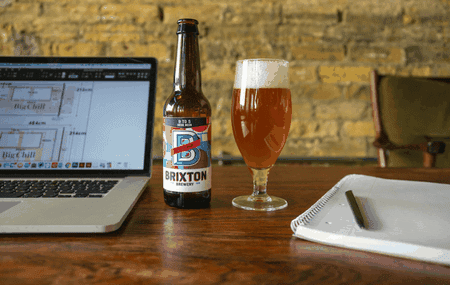 Having a drink at lunch is one thing, but what about all day? All day, while at work, with a cold one at the desk. We tried it so you don’t have to / are allowed to (delete appropriate).

Brixton Brewery have got together with Big Chill to release a beer to be enjoyed at your desk. Their 9 to 5 Desk Beer is a pale ale that comes in at an “honestly, it’s absolutely allowed” 2.8%, meaning that supping in the office should be fine. And while low alcohol or alcohol-free beers often taste god awful, this hazy pale ale boasts Australian hops Galaxy and Vic Secret, giving it a “bright peach flavour and stone fruit aromas”, apparently. 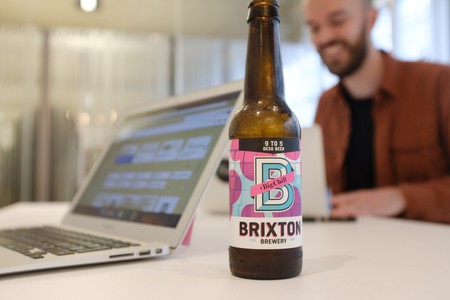 Brixton claim (somewhat light heartedly) the beer is one you can “enjoy just as easily during working hours”. Say no more. Does actually drinking 9 to 5 Desk Beer from nine to five at your desk have any affect, positively or negatively, on a normal working day?

There is research that supports the fact that low levels of alcohol consumption is actually beneficial to a person’s health. The Journal of the American College of Cardiology conducted an eight year study that found that light-to-moderate alcohol consumption had a reduced risk of death when compared to zero alcohol consumption. In addition, according to Drinkaware’s Chief Medical Adviser Professor Paul Wallace, drinking “reduces the amount of fatty deposit (atheroma) which narrows the arteries” as well as “prevents the formation of blood clots”.

More importantly, for this particular piece of groundbreaking science, what would the immediate affects be? A study published in Consciousness and Cognition investigated the effects of mild alcohol intoxication on creative cognition and found that alcohol improved creative problem solving, but not divergent thinking. Having a skinful could makes us skillfull.

And with that, we embark on the first steps of a higher consciousness, some sort of Limitless for the lager lout. Microdosing for the mundane. One beer, on the hour, every hour, for one man and one woman. With a breathalyser test and cognitive tests to go along with each one. Cheers! 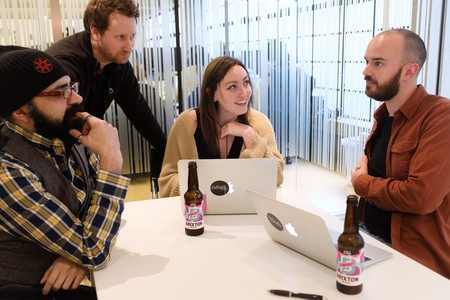 9:00 am: Having had some drinks the night before, recording a very relieving zero with the first breathalyser test of the day counts as some sort of reassuring moral victory. Even more merciful is that the beer is delicious. The “ultimate desktop buddy” is as fruity as they claim and although potentially a bit hoppy for some, the idea of having eight more suddenly seems quite manageable. Certainly more manageable than the problem solving and mental agility test.

10:00am: One drink in and the second test sees me score another zero. More concerning is my colleague Bryony, who records a o.o3 (a 0.05 or above is officially too intoxicated to drive) seconds before she heads into her first meeting of the day.

11:00 am: Don’t give Bryony the keys to your car, or any car for that matter. Two bottles down and she hits 0.07, nearly 50% over the limit and it’s not even midday. My 0.03 has crept up but I’m still good to go. Someone, somewhere, is looking down on us and sends an oversized Cornish pasty to the office as a thank for you for some filming we did. A mid-morning serving of stodgy, beefy deliciousness is heaven sent, well, if we assume heaven is Cornwall. We also both score higher on our cognitive tests to keep the upward curve going. 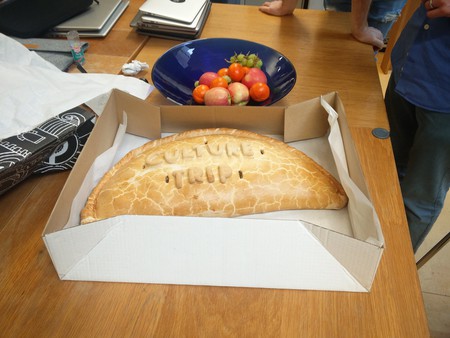 12:00 am: Incredibly, I’m back down to perfect-for-driving, fully operational, big fat zero. Clearly Cornwall’s finest export has worked wonders and its shortcrust sponge must be swelling nicely with “bright melon notes”. Bryony, on the other hand, is well on her way to being two times over the limit with her 0.09 reading.

1:00 pm: For a fair test, today has to be an average day and what could be more bang average than a Pret baguette (Chicken and Bacon Caesar, obviously) and a packet of crisps. Only this time it’s washed down with yet a another bottle of south London’s finest rather than that slightly disappointing stuff that comes out of the can with the avocado bunny ears. The mental agility and problem solving continue their upward trajectory, but the rate is slowing. It appears there’s some sort of levelling out going on because Bryony’s reading has come down to 0.04, so similar to what happened to me, it just took a little longer. I remain at zero – I’m beating the beer. All day drinking could yet be an actual thing. 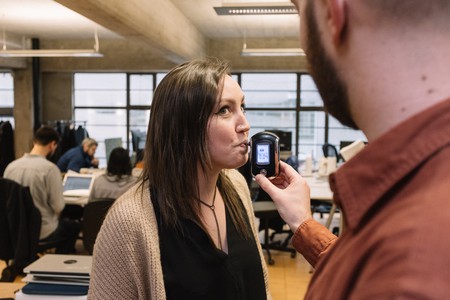 2:00 pm: But maybe it shouldn’t. While the driving limit continues to be a distant afterthought (for me at least with a 0.02 reading) we’re both in this weird, lackadaisical limbo – not drunk (not even close it appears) but with all the bloating and toilet visits that come with an average drinking session. Bryony has shot up to 0.07, but work still progresses. We’ve got a presentation we both have to attend at 3pm. This could make or break us. Entertaining and we could be loving life, on the duller side and we could be asleep before slide three.

3:00 pm: Short, sharp and to the point, it is not hours of endlessness. And back down our readings both go, me to zero and Bryony to 0.03. Maybe once your food has a bit of time to digest the drop kicks in, who knows? We’re definitely not drunk, but we are definitely full up. The problem solving and mental agility has, however, stalled. This must be exactly how elite cyclists feel half way up Ventoux, when they hit the wall. Now it’s all about powering through.

4:00 pm: The most recent beer went down easier than the last four. We could genuinely be in second wind territory, with the end is approaching. Our readings have barely moved and there’s a pep in our steps. I’m like some sort of Marco Pantani of the beer world, and the peak is in sight. Even our problem solving tests have had a small rise. 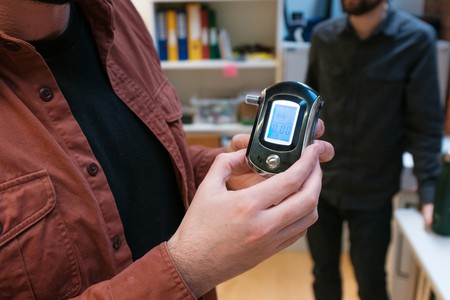 5:00 pm: The last readings of the day are virtually identical to the previous ones. Bryony goes down by one (back to 0.03), while I stay on zero for the third reading running. In terms of productivity, there was an undeniable dip three-quarters of the way through, but that could happen on any given day. OK, maybe we didn’t become mid-film Bradley Cooper, but we didn’t get hunted by the Mafia either.

The reality is that it turns out drinking all day can be just like any other day, as long as you ignore the weird looks, awkward conversations, bloating, 1,000 odd calories and the constant, relentless, needing a wee. But then again, all the awkwardness and weird looks will stop if you make it a regular thing and do it every day.

Ultimately, the star of the show is the beer – it tastes fantastic and won’t get you sacked. If you want to drink all day at work you’ve got the green light from us, and our line manager, we think… Knock yourself out, or don’t, as the case seems to be. Hey, drive a car while you’re at it, you’ll be under the limit!

Please note: Definitely don’t drive a car. It would a terrible, dangerous decision.