Gaelic football was officially organised in Ireland in the late 19th century when the Gaelic Athletic Association (GAA) was formed in 1887 to arrange, organise and promote Gaelic football and hurling around the country. Across the Irish Sea, in England’s capital, the sport in London wasn’t that far behind.

Over centuries, since records began, there has been the movement of Irish and English immigrants in both directions. The Irish Potato Famine of the 1840s saw more than a million Irish people head to England (with a similar amount losing their lives also), so by the turn of the century the number of Irish people living in London was significant. As Gaelic sports formalised in Ireland, London followed suit accordingly. Today, the capital has the largest, most active GAA community in the world outside of Ireland itself.

The rise of GAA in the city was part of a wider movement that saw Irish-influenced sport establish itself in the country. Dewsbury Celtic, the rugby league club from West Yorkshire, was formed in 1879, while London Irish, the rugby union club that would go to produce a ton of internationals (Irish or otherwise), was established in 1898. The London GAA was formed in 1896 and has evolved throughout its more than 100-year existence. 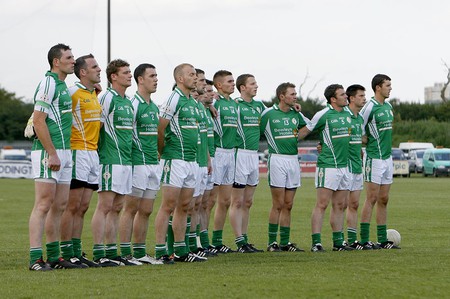 London stand while the Irish anthem is played in a match against Waterford at Emerald GAA Grounds in Ruislip. | © Andy Robinson/REX/Shutterstock

As an organisation the London GAA are responsible for organising competition in the capital, as well as as the London side that compete in Ireland’s country structure, competing in the Connacht provincial championship. Today, in London, the league has three divisions, with promotion and relegation, as well as a variety of cup competitions. Sides such as Tír Chonaill Gaels, Kingdom Kerry Gaels and Hibernians have enjoyed huge success in the London Senior Football Championship, with the latter dominating proceedings at the turn of the 20th century – between 1898 and 1911 it won 10 championships.

The absolute stronghold of Gaelic teams is a clear reflection of the Irish communities that have formed and settled in London. The north-west, across Willesden Green, Cricklewood, Colindale and West Hampstead are among the areas of London with the highest Irish populations (according to a 2011 census), and a quick run through London’s GAA teams sees the vast majority of clubs based in similar areas.

Eire Og GAA, Garryowen GFC, Harlesden Harps and North London Shamrocks are a few of these clubs playing today, with the likes of Glen Rovers, Tír Chonaill Gaels and Granuaile just outside of London but still very much part of the Gaelic scene in the city. Tír Chonaill Gaels has actually dominated the London Senior Football Championship in recent years. The club, which was formed in a pub in Kilburn in 1962, has won six titles since 2007, finishing runner-up on a further three occasions.

In London and interested in playing Gaelic football? Head here for all the clubs in the capital.

Essentially, the GAA has two main functions in London. Firstly, it acts as mark of Irish identity, facilitating an expression of ‘Irishness’ for the country’s diaspora. And secondly, it provides a social network for London’s Irish community, offering a sense of familiarity for Irish people in London, even if they have different backgrounds. Sport can be the common thread.

In addition to this, there is also the introduction of Gaelic sport to those who may never have come across it if it wasn’t for Irish immigration. In one particular corner of south-east London, one school is bringing Gaelic football to an entirely new generation and community. St Paul’s Academy, based in Abbey Wood, has developed a Gaelic football programme (in partnership with nearby club Dulwich Harps) thanks to a collection of Irish teachers and their footballing background. Brian Smyth and Michael Donnelly have taken their team – predominantly made up of children of Caribbean and West African descent, who previously had no idea the game even existed – to the prestigious Féile Peil na nÓg tournament each year since 2013.

The Féile Peil na nÓg is the premier tournament for Gaelic sports in Ireland, with different age groups competing against the very best young players in the country, with international teams such as the south London team appearing if deemed good enough. Despite playing against sides who have grown up playing the sport most of their lives, the south London team, have enjoyed huge success, winning divisions and promotions consistently. Interestingly, last year’s winners in the first division were a team representing New York.

Gaelic football, along with hurling and camogie (hurling played by women), has for a long time now, provided newcomers with a starting point to settling into London life. While people play sports for the enjoyment and the fitness, the social aspect is just as important. Historically, Gaelic clubs could be where recent immigrants met their new employer, found accommodation and new friendship groups. It has worked, and continues to do so, in the same way that Irish dancing or trad music does, facilitating social connections through an interest shared.

It also instills a sense of pride. In London, the GAA is a uniquely Irish thing. In 2013, when the London team did particularly well in the annual Connacht championship, it helped deliver a degree of relevance; the notion that the community are still just as Irish, even if they no longer live there.

With more than 30 Gaelic sports clubs in London, there are no clear signs that uptake is falling. There isn’t even an element of saturation within the concentration of clubs in London’s north-west, all playing their part like they would in an Irish city or town. As second, third and fourth generation Irish continue to play Gaelic games, the most interesting aspect of the sport in London is whether newcomers and novices from outside the Irish community also get more involved, just like at St Paul’s Academy. Ultimately, is the appeal and enjoyment of playing appealing in solitude, or is the Irish symbolism and identity associated with the sport integral to its popularity? Perhaps in another 100 years, it will will have filtered far further into London life and way beyond Irish ethnicity.