What Are the Foods That Make People in the UK the Happiest? 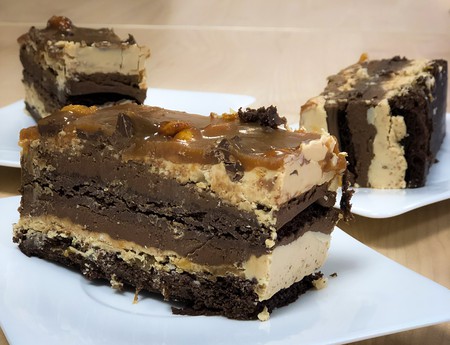 In celebration of International Day of Happiness and the foods that make us happy, what better way to celebrate than to claim one of the 3,000 free Peanut Butter and Fudgy Chocolate Deckers from your local Giraffe World Kitchen? Giraffe also asked a selection of Brits which food makes them the happiest and here are the results.

There are so many reasons why chocolate makes people happy but scientifically there are over 300 naturally-occurring chemicals in chocolate, and some of them can affect the human brain via the release of particular neurotransmitters. These neurotransmitters basically tell your body to release phenylethylamine, which causes a degree of excitement, quickens your pulse, and makes you happy.

Curry is one of the most popular meals in Britain, so for those in the know it won’t come as a surprise that it’s been voted the second most popular dish when it comes to making people happy. It’s actually the chilli in the curry that binds to a receptor inside the lining of the mouth. This is the same receptor that registers pain from heat and the pain caused by this leads to the release of endorphins, the body’s natural painkillers.

Fish and chips is yet another very British dish, but why does it make our list? Seafood is filled with selenium, which helps your body fight anxiety and depression, therefore it helps significantly with being clear-headed, confident and composed which in turn can make you feel pretty happy with yourself.

There’s plenty of evidence to suggest that devouring a big, juicy hunk of steak makes you happier, but there’s scientific proof, too. The consumption of red meat halves the risk of depression.

Many people feel better after munching on a burger, as with steak, also made with red meat. But with a burger you can top it with even more food that makes you happy. Love cheese? – add a slice. Fancy some spice? – add in some chorizo. Have a sweet tooth? – add some maple bacon. 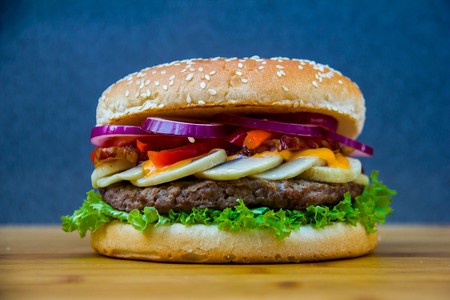 Eating ice cream really does make you happy. Scientists have found that a spoonful of the cold stuff lights up the same pleasure centre in the brain as winning money or listening to your favourite music. Neuroscientists at the Institute of Psychiatry in London scanned the brains of people eating vanilla ice cream. They found an immediate effect on parts of the brain known to activate when people enjoy themselves; these include the orbitofrontal cortex, the “processing” area at the front of the brain.

Sadly, there’s no scientific reasoning why the crackers we tend to use in cheese and biscuits make us feel happy, but cheese does contain an amino acid called tyrosine that makes us feel content when it’s broken down in our bodies. The fats in cheese also encourage our brains to produce dopamine, a natural feel-good chemical so at least when you’re helping yourself to the cheese and biscuits at the next family party, you have a good excuse.

Sometimes, nothing can make you feel happier than a huge bowl of carbs and yes, you guessed it, there’s a reason behind this. The theory is that fast-burning carbs are associated with the pleasure centres in the brain, so they tick all the boxes to make you get that content feeling we all love. Just be careful, there’s also proof that carbs can be addictive, too.

A huge bowl of mashed potato may give you the same feeling as your bowl of pasta, but what would make you even happier? Add some cheese into that potato and you’re going to want to thank us later.

Not only will you feel pretty content with yourself for making or ordering this and posting to your Instagram; people love aesthetically-pleasing food. It will also leave you feeling really great after as the salmon contains depression-beating selenium and the egg will supply B-12, folate, protein and some healthy fats which are all very important in terms of brain function. And to make it even better, carotenoids are linked to optimism and they come from the egg yolk, too. Add in some avocado and it’s the perfect way to start the day. 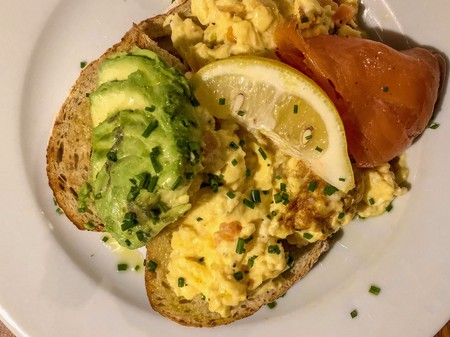 Recently, Nataly Kogan, founder of ‘Happier’, said pancakes are the key to happiness in her TEDTalk and we believe her. She spends her days making people’s lives happier so she must know her stuff! By adding that sugar kick from the syrup you’re on for a total winner.

Lots of tiny dishes are certainly better than one big one, so tapas is a great way to get your mood back on track. There are so many reasons as to why eating tapas will have you feeling great in no time and that’s due to all of the goodness in those tiny dishes. There will be Omega 3 found in oily fish and plenty of the ones we’ve already mentioned such as cheese, egg, carbs and red meat. We think it’s a perfect excuse to order a couple of extra dishes.