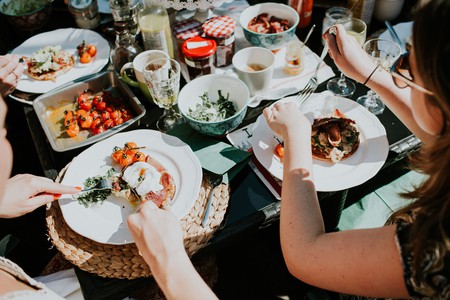 On a sunny evening in July, I arrive at Clair’s house in Dalston, a trendy borough in East London. She pours me a generously-sized glass of wine, and we settle in her back garden for a meal and a chat – despite never having met before.

I’m at Clair’s to try out VizEat, a digital platform that connects travellers or locals with hosts who are willing to cook for strangers in their homes.

Similar to Airbnb, guests can search the site or app for their chosen town and meal preference, while hosts create profiles where they post photos, details about their meal and fee, and something about themselves, including the languages they speak.

Clair is in her sixties, with a shock of greyish-blonde hair and a sharp sense of humour. She gives me a tour of her garden, where she grew the herbs, potatoes and vegetables she used to cook our homemade meal – stuffed vine leaves, potatoes, baked chicken, and a cabbage and nut salad, followed by fresh fruit and lemon cake for dessert. 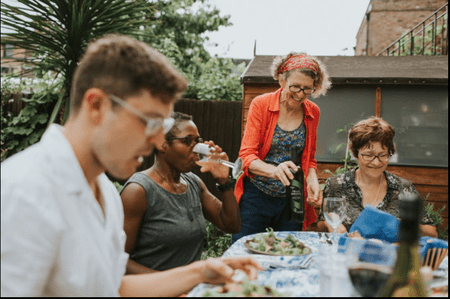 Three hours and two bottles of wine later, we’ve discussed food, politics, and our shared history as American expats who came to study in London, but never left. The sun is setting when I stand to leave, and I feel like I’ve made a new friend – which, VizEat co-founder Camille Rumani tells me, is exactly the purpose of the digital supper club.

‘Sharing food is something that’s quite universal, and a meal is the perfect moment to gather people and to discover culture from the inside,’ says Camille, who was inspired to create the service while living and working in Beijing. ‘Chinese friends invited me over for a New Year’s dinner, and I realised it was the first time that I was really experiencing the culture from the inside. In that moment, I felt very privileged. I was able to ask all the questions I had – about the dishes, and about the culture, and I felt really welcome in the house. It totally changed the way I felt about Chinese culture at the time.’

Back in Paris, Camille teamed up with Jean-Michel Petit, her cousin-turned-co-founder, who’d had a similar experience while travelling in Peru. They began hosting friends of friends who were travelling to Paris, and launched the service in 2014. Last September, they raised some $4.3 million in funding. 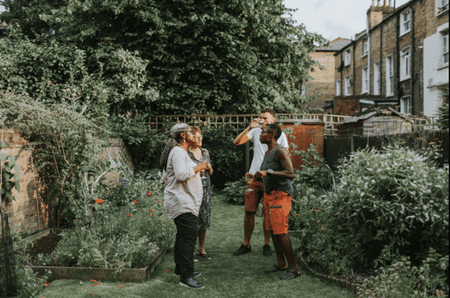 ‘We started VizEat because we want to change the way people travel, one food experience at a time. People had just started to talk about Airbnb and were curious about those experiences – but [at that time, the idea of the sharing economy] wasn’t mainstream at all,’ she says.

‘Friends would ask me, ‘How will you find hosts? Who would be willing to let strangers into their homes?’ But cooking for people and sharing food is something quite universal, and I think that’s why it spread so quickly.’

Today, the platform has more than 25,000 hosts across 130 countries. Fans include Apple CEO Tim Cook, who shared a VizEat experience with Camille in Paris last February. ‘He totally got the concept. He said to me, ‘The aim of any platform should be to bring people together and build stronger social relationships. That’s what tech is for.’

‘I think the idea really works because it solves a paradox I found when I was travelling,’ Camille adds. ‘You might be in a city with millions of people, but you don’t actually meet any of the locals. You’d say ‘Paris was great, but I didn’t meet any Parisians.’ Now, you can.’

‘After the recent terror attacks in France, former guests sent their hosts messages saying things like ‘I saw what happened in Paris, I hope you’re safe, I’m thinking about you.’ These are people only spent two or three hours together, and now when they hear about France, they think about their VizEat hosts. To me, it means the moments and relationships we’re creating are so real, and so authentic.

‘It makes me proud to read the reviews and see that we bring amazing highlights to peoples’ trips, and maybe even open up their minds to new cultures. It’s why we go to work every day.’

VizEat is headquartered in Paris available to download on iTunes and Android. The website and app are currently available in English, French, German, Italian, Spanish and Chinese.