Drop by the central London locations of Michael Powell’s vilified classic about voyeurism.

Peeping Tom is the Michael Powell masterpiece that was misunderstood and lambasted on its release in 1960, irrevocably tarnishing (and effectively wrecking) the career of England’s greatest home-based director. Self-consciously lurid, tawdry and horrific, the film was a Freudian study of scopophilia – the morbid urge to gaze – far too sophisticated for the critics and audiences of the day.

Locals and tourists of a Powellian bent can still find sites of Peeping Tom in Fitzrovia, an area at the intersection of the London Borough of Camden and the City of Westminster that’s bordered by Euston Road to the north, Gower Street to the east, Oxford Street to the south, and Great Portland Street to the west. Two of the film’s early sequences unfold there. 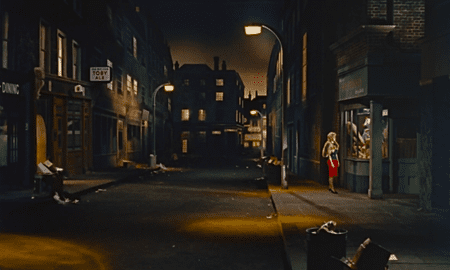 Peeping Tom begins with the murder of a prostitute. After a close-up of a woman’s eye opening in terror, Powell cuts to a wide shot of Rathbone Street at night. Pools of mustardy light from street lamps illuminate the granite. The blowsy prostitute (“Dora” in the credits), cleverly played by Brenda Bruce, wears a cheap fur, seamed stockings, heels and a bright red skirt. She lingers by a fashion shop displaying the body parts of nude mannequins – a first intimation of a Jack the Ripper-like atmosphere.

The street is deserted apart from Dora and a young man (the German actor Carl Boehm as Mark Lewis) who has a portable movie camera concealed in the sleeve of his duffle coat. He clicks it on and catches Dora in the crosshairs of his camera’s sight. “It’ll be two quid,” she unsmilingly announces when he approaches her. 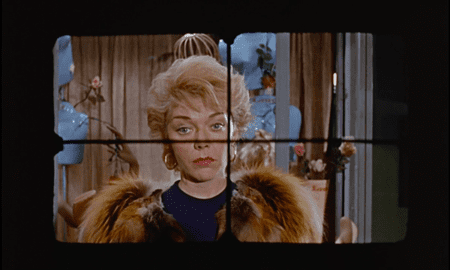 She turns into Newman Passage, a narrow, 100-yards-long alley that heads west to Newman Street and once provided a refuge house for communists. Just inside the alley is a door and a stairway that leads to Dora’s room above the Newman Arms at 23 Rathbone Street. Formerly a brothel, the pub, which was recently given a facelift, features in George Orwell’s novels Keep the Aspidistra Flying and Nineteen Eighty-Four.

Before Mark follows Dora into the building, he tosses a Kodak film box in a dustbin full of building refuse, food, twigs and cardboard. Powell is evincing our disgust here. There is disgust, too, on the face of the middle-aged woman who passes Mark on the stairs as Dora leads him up to her room. When the morning after the woman laments Dora’s murder as she stands amid a throng of gawpers, she reveals her hypocrisy. 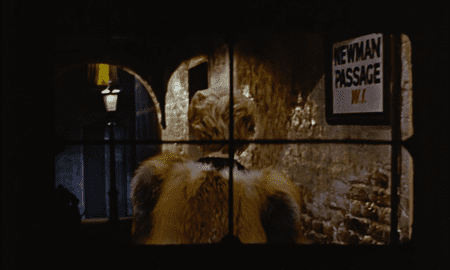 “Shut the door,” Dora tells Mark. She throws off the fur, turns on her heater, and removes her skirt. Mark levers up a swordstick – it remains unseen – attached to his camera. Terrified, Dora screeches as Mark advances on her, his camera rolling, capturing her fear as he plunges the swordstick into her throat.

He has made a silent black-and-white snuff film for his private entertainment, and when he plays it back in his rented room as the credits go up, Powell shows Dora’s eyes goggling horribly and the gaping hole of her mouth as she screams. Sympathetically played by Boehm, Mark – who works as a focus-puller at a film studio – is outwardly no ravenous psycho, but a soft and gentle neurotic, probably impotent. In certain angles, he seems like a prettier version of the child-killer played by Boehm’s countryman Peter Lorre in Fritz Lang’s M (1931).

Following the discovery of Dora’s body the next morning – carried away in a police van, filmed by Mark – Mark takes a scooter ride to a newsagent’s shop at 29 Rathbone Place (recently, but no longer, the site of a Caffe V), on the southwest corner of Percy Street. 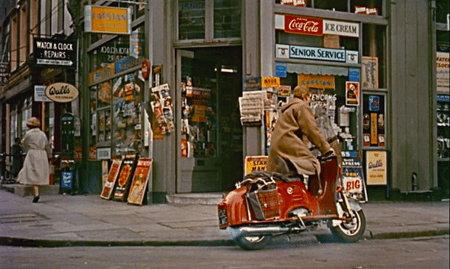 Pausing only to look at the girlie photos festooned on the door of the shop, Mark enters. He’s come to take some photos of scantily clad girls for the owlish, businesslike proprietor (Bartlett Mullins), who sells such “views” to his male clientele. One such customer, an old gent played by Miles Malleson, hems and haws over which views to buy before committing to an entire book of them. His hesitations are interrupted by a young girl who comes into the shop to buy a chocolate bar: innocence and corruption comically sit side by side.

Upstairs, Mark photographs a blonde model, Milly (Pamela Green), who wears trashy lingerie and treats him with contempt. He then moves onto another model, Lorraine (Susan Travers), who wears a fedora and little else. Rathbone Place (or a filmed insert of it) can be glimpsed through the window by which Lorraine stands in profile. When she turns to Mark, she shows him her disfigured upper lip, possibly the result of a knife wound, which enthralls him. This follows Milly’s revelation that she she was beaten the previous night by her “fiancé,” who had found her with her “boyfriend.” 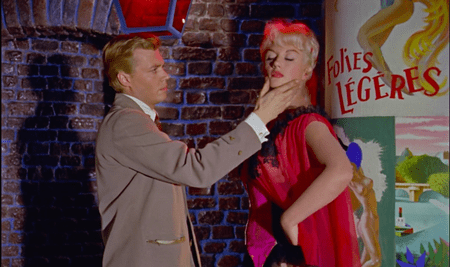 Aside from the explicit nature of Mark’s murders in Peeping Tom – Dora isn’t his only victim – there is a powerful undercurrent of violence toward women throughout, and it’s tied up with the fear of female sexuality. Misogyny wasn’t part of the language of film criticism in 1960, and reviewers didn’t isolate it as the main cause for their hatred of the movie, but Powell and his screenwriter Leo Marks make it an emphatic part of their discourse. Gazing – a perversion in its own right – and violence are inextricably linked.

Visiting and gazing at Peeping Tom’s Fitzrovia landmarks is, of course, a harmless activity. The Goodge Street tube station is a handy starting point.