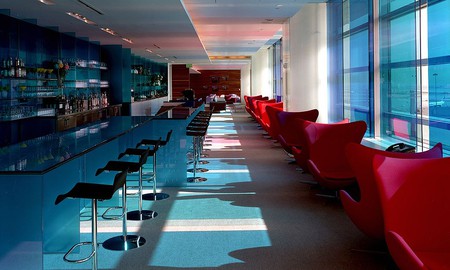 Virgin Atlantic is employing VR tech to transport you to some of the very top bars in the world…right from its airport lounges.

A few months back, Virgin Atlantic announced partnerships with some of the very best bars in the world. The cocktail wizards from places like Dandelyan (just named the world’s best bar at Tales of the Cocktail), BlackTail (the best new American cocktail bar), and Columbia Room (best American cocktail bar), to name just a few, had each brought their signature drinks to the airline’s Clubhouses.

Virgin has now taken the partnership a step further. The airline has just launched its virtual reality drinks experience—the world’s first virtual reality cocktail menu, they say—which uses VR tech to transport you from its Clubhouses to a barstool in a partner bar of your choice, where you watch your cocktail being made by one of the world’s best bartenders. Meanwhile, airline lounge’s bartenders will be replicating it for you as you watch the VR video. Remove the headset, and the drink is right in front of you, waiting to be sipped.

Order the Rum & Cola at Heathrow, and you’re suddenly sitting at the wooden bar of Cuban-themed BlackTail in NYC with Jesse Vida making small talk while stirring up the drink for you. You can look around and take in the bar’s lush decor and vintage photographs covering the walls, and even look up to admire the stained glass on the ceiling. (Extremely attentive drinkers may note the glassware and ice differ from what you’d normally be served at the bar, to match what’s available at the Clubhouses.)

Order the Dead Reckoning, and you’re suddenly in the tiki paradise of San Francisco’s Smuggler’s Cove. Get the Concrete Sazerac, and it’s being made by Ryan Chetiyawardana at Dandelyan in London. Go for a classic Daiquiri, and you’ll get a glimpse of what it’s like to hang out on Necker Island, a private island in the British Virgin Islands that belongs to Sir Richard Branson himself. Check it out in the video below.

The experience is currently available at the Virgin Clubhouses at Heathrow, JFK, Newark, Dulles, San Francisco, and Los Angeles. Partner bars include BlackTail and Employees Only in New York, Dandelyan and the now-defunct White Lyan in London, Columbia Room in Washington DC, Smuggler’s Cove in San Francisco, The Walker Inn in Los Angeles, and Necker Island in the BVIs.