Located on a manicured street in Marylebone, Trishna is a family-run South-West Indian restaurant making Michelin accessible to anyone looking for a delicious feast. The Sethi siblings are behind some of the most exciting restaurants in London today: together they co-own and run Michelin-starred Trishna and Gymkhana. With so much on this family’s plate, their dedication to offering incredible food for incredible prices is even more admirable. 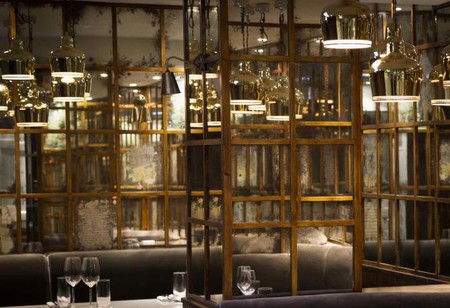 The best way to sample Trishna’s Michelin food without paying Michelin money is with the Express lunch menu. £15 will get you two courses, a side dish, and a bottle of Cobra, a glass of wine, or the creamiest sweetest mango lassi you’ve ever had (available in other flavours as well). The starter is an Aloo Chat, which is a potato, masala chickpea, tamarind, and sweet yogurt dish, complex and perfectly balanced in its savoury, sweet, and spicy flavours and its soft, crunchy, and creamy textures. The cool yogurt adds a refreshing end to this flavoursome combination of foods and is both light and moreish simultaneously. A truly stunning starter that sets the precedent for the rest of the meal.

Moving on to your main course will give you the option of Kori Gassi (chicken drumsticks, Mangalorean spices, coconut), Andhra Lamb Masala (curry leaf, coastal spices), or Nilgiri Paneer (stuffed paneer, coriander, coconut, jaggery). The meat is tender, the sauces rich and fragrant and everything comes served with a helping of Hyderabadi Dal, Basmati rice, and naan. The rice is lovely and fluffy and is the perfect accompaniment to the rich, flavour-filled food.

Although each dish looks small on its own, together there are a large and varied array, offering you a delectable taste of South-West India on your lunch break. 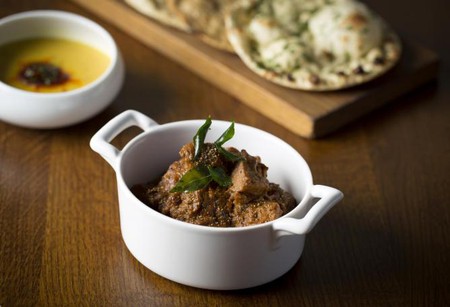 What you need to know about Trishna:

Head Chef Rohit Ghai is an alumni of the Oberoi and Taj hotel groups in India, where he developed his extensive knowledge of South Asian cuisine before moving to the UK to work at Benares. Since becoming group Head Chef of both Trishna and Gymkhana he’s pioneered a focus on fresh, seasonal produce and classical Indian cuisine.

Anglo-Indian touches combined with the best of South Indian coastal food, all wrapped up in a Michelin class package.

Ensconced within the ultra-fashionable Marylebone neighbourhood, but walking distance from the dazzle of Bond Street.

Easier on the wallet than the average Michelin-starred restaurant, particularly with the Express lunch- which offers a staggering amount of high class cuisine (and a drink) for a mere £15.

The sublime Aloo Chat will have you returning again and again, whilst the Caldine Jheenga Curry – a combination of Goan spices, tiger prawns and poppy seeds – is perhaps the best way to taste the flavours of the Indian coast without travelling to Goa yourself.