The Top Peruvian Restaurants In London 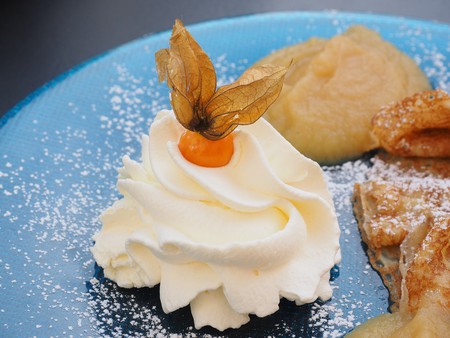 London’s love affair with Peruvian cuisine doesn’t seem to be ending anytime soon. Londoners can’t seem to get enough of the zesty flavours of ceviche, tender anticuchoes, and a good strong Pisco Sour. Peruvian cuisine is one of the most diverse fusion foods in the world with influences from Spanish, African, Chinese, Japanese, Italian, and French immigrants. These are our top choices for a taste of South America in London.

Peruvian food comes to Mayfair in the form of glamorous basement bar and restaurant, Coya. Food is prepared in one of the three open kitchens including a Ceviche Bar, a charcoal grill, and a central kitchen. A separate Pisco Bar carries over 40 tequilas and specialises in bespoke Pisco infusions. The menu is lengthy so you can have a fantastically diverse mixture of food including ceviches, tiraditos, anticuchoes, and other meat and fish grills. One major reason for the popularity of Peruvian food is that it’s great for health conscious people and it’s easy to avoid fatty dishes and excess carbs. Coya even serves a healthy set lunch menu and an accompanying juice and smoothie selection.

Lima in Fitzrovia was the first Peruvian restaurant in London to gain a Michelin star, and due to its popularity, chef Virgilio Martinez opened a second restaurant and Pisco Bar in Floral Street. Lima is fine-dining but not as we know it; instead, there are painted brick walls, Aztec artworks, tiled floors, and flowers imported from the Amazon. You truly eat with your eyes at Lima and the food is a carnival of colours, reflecting the vibrant culture of South America. It tastes incredible too, made with carefully sourced ingredients from the UK which also showcase organic and wild produce from growers in Peru. Recommended is the salmon tiradito and the hot ceviche of grilled sea bass, corn puree and yellow aji pepper was a big hit too.

With the opening of his first London restaurant, Ceviche in Soho, Martin Morales pioneered Peruvian cuisine in London. His concept of bringing his native Lima to the capital was a popular one; he soon opened Andina, Ceviche’s sister restaurant in Shoreditch, and, most recently, a new branch of Ceviche in Old Street. The first restaurant has that casual Soho buzz that you’d expect but the décor is based on a Bar Juanito, a bohemian restaurant in Lima and every little detail is thought of here. The signature ceviche is incredible and is made right in front of the diners so it’s as fresh as can be. The dishes include authentic ingredients from Peru as well as locally sourced ingredients and as much sustainable produce as possible. A traditional Pisco Sour from the Pisco bar is obviously a must too. 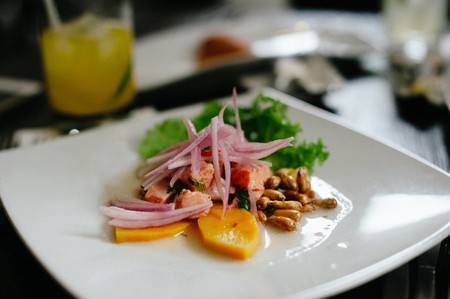 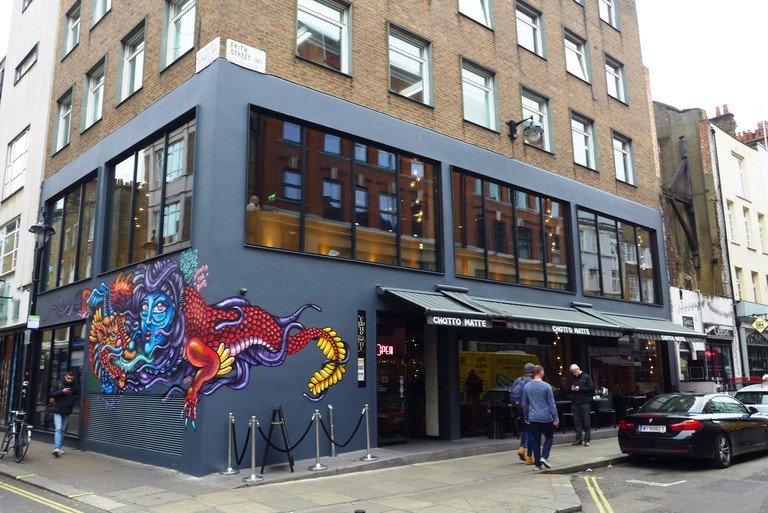 Chotto Mate, Soho | © Ewan Munro
If you’re looking for a top night out at a brilliant buzzy restaurant, we highly recommend Chotto Matte in Soho. The food is Nikkei, a Japanese-Peruvian fusion originating from Japanese immigrants in Peru, and the flavours are nothing short of spectacular. Chef Jordan Sclare has crafted a menu featuring a variety of sushi, sashimi, soups, salads, and grills which are perfect for sharing. The restaurant has a fun club-like atmosphere with dark interiors and flashy graffiti on the walls. Downstairs is a lively bar serving Nikkei-inspired Pisco, Shochu, and Sake.
Open In Google Maps
11 - 13 Frith Street, West End, London, England, W1D 4RB, United Kingdom
+442070427171
Visit Website
Give us feedback

Bar, Restaurant, Japanese, $$$
Facebook
Email
Twitter
Pinterest
Copy link
Share
Map View
Taking its name from the Japanese word for sea urchin, UNI is a gorgeous, intimate restaurant in Belgravia. There’s a bar upstairs serving creative cocktails and Pisco, and downstairs is the cosy dining area, perfect for a special date night. The sushi and sashimi are excellent as are the tiraditos, tacos, and ceviche. But a special mention goes to the tempura which is light as a feather and totally non-greasy. Make sure to end the meal with a delicious selection of mochi.
Open In Google Maps
18a Ebury Street, Belgravia, London, England, SW1W 0LU, United Kingdom
+442077309267
Visit Website
Give us feedback
Give us feedback