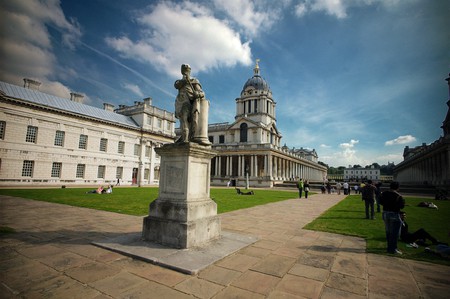 Welcome to the streets of Georgian London, where tiny rows of terraces make way for grand, stylish squares full of beautiful town houses. Where symmetry and restraint is the order of the day, Greek and Roman influences abound, and classical design is king. The opulent free-for-all of Baroque is on its way out, to be replaced by careful application of proportions. Let’s start exploring… 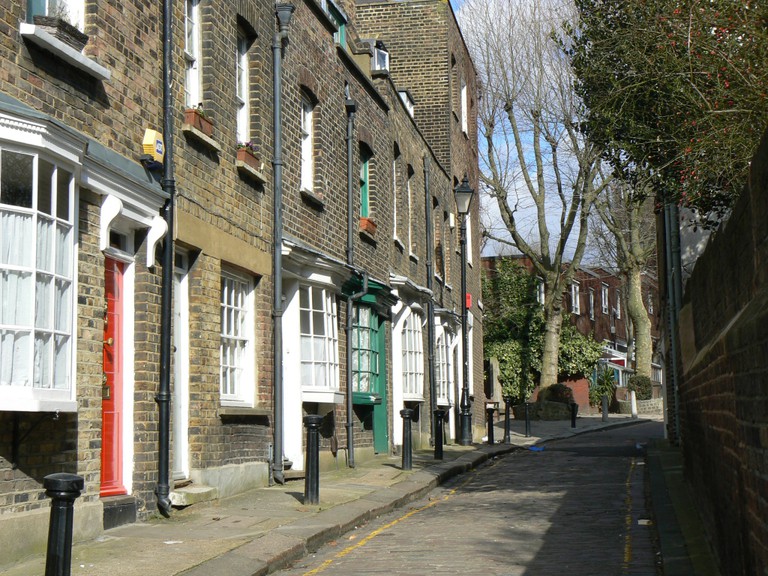 Little Green Street | Misha Popovikj/Flickr
This little cobbled street in Camden has just 10 houses, all of which are Grade II listed and were built in the 1780s. It’s one of the oldest streets in London; the earliest official record of it is in the Old Bailey court records for 10 July 1805, when Mary Lee, a servant, was charged with theft. The buildings survived both the industrial revolution – which swallowed up many of the area’s 18th century streets – and the Blitz. Not to mention, the street has since picked up a bit of a cultural legacy: The Kinks filmed one of the first music videos (Dead End Street) here, and the classic exteriors have lent themselves to period dramas, too. 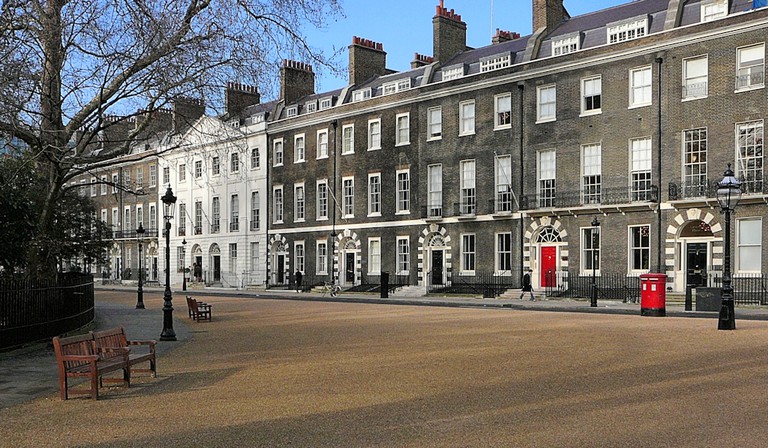 This pretty Georgian square, between Tottenham Court Road and the British Museum, was built between 1775 and 1783. The garden in the centre is, unfortunately for us, privately owned, but the square is still worth a look, as the Georgian buildings have been so well preserved. The doorways to each of the beautiful houses have distinctive doorways decorated with Coade stone, a tough, resilient artificial stone made in Lambeth. The square is named after the Dukes of Bedford (the main title of the Russell family), who owned much of the land in Bloomsbury at the time, and was once the home of Bedford College – the first higher education centre for women in Britain, which was founded here in 1849. 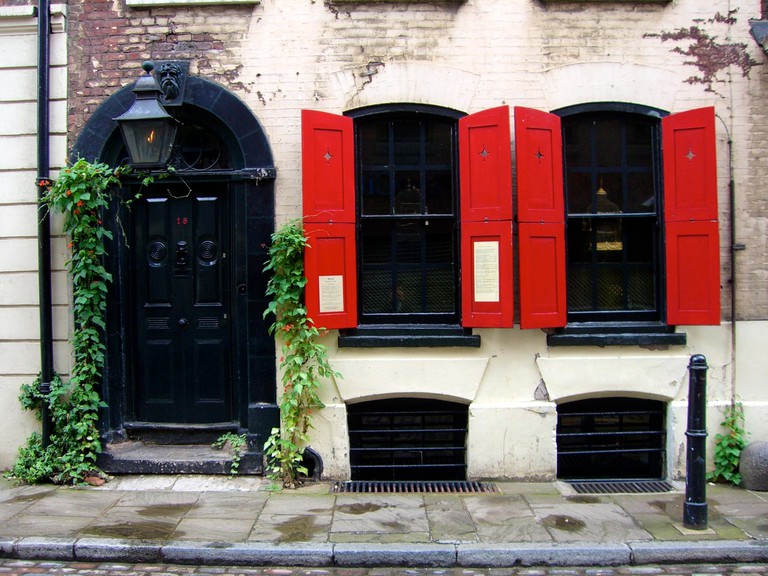 Dennis Severs' House | © Edvvc/Flickr
Experience life through the lens of the Jervis family, a ghostly 18th-century family of Huguenot silk weavers, at Dennis Severs’ House. The house itself was built in 1724 as part of the Georgian terraces of Folgate Street and, through the intervention of Canadian artist Dennis Severs, became one of London’s most unusual secrets in the 1970s. With items bought at flea markets, Severs transformed the house into a ‘still life drama’ that charts generations of the Jervis family from 1724 to 1914. Part-museum, part-immersive theatre, the house evokes the smells, sounds and sights of a working historic home, and every room has its own unique atmosphere. Visits are conducted in silence, and there’s even an in-house cat. 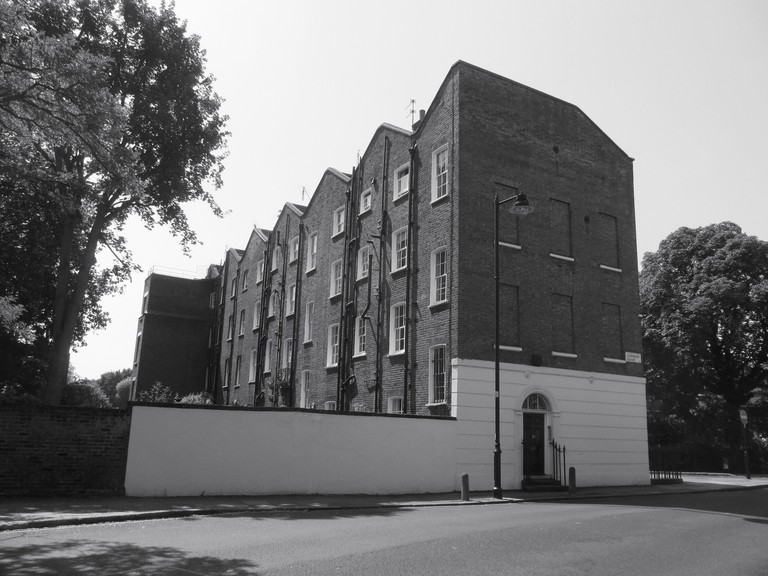 Canonbury Square | David Holt/Flickr
Developed between 1805 and 1830, Canonbury Square originally looked quite different until the New North Road turnpike, now known as Canonbury Road, was constructed to cut across. Despite being a Georgian development, the Square’s most famous resident was distinctly more modern: the top floor flat at number 27 was once the home of George Orwell, who moved here in 1944 after being bombed out of his former home in Mortimer Crescent. It is thought that Orwell finished writing Animal Farm and started Nineteen Eighty Four while living in Canonbury Square; and his years living here were ‘the best of times and the worst of times.’ 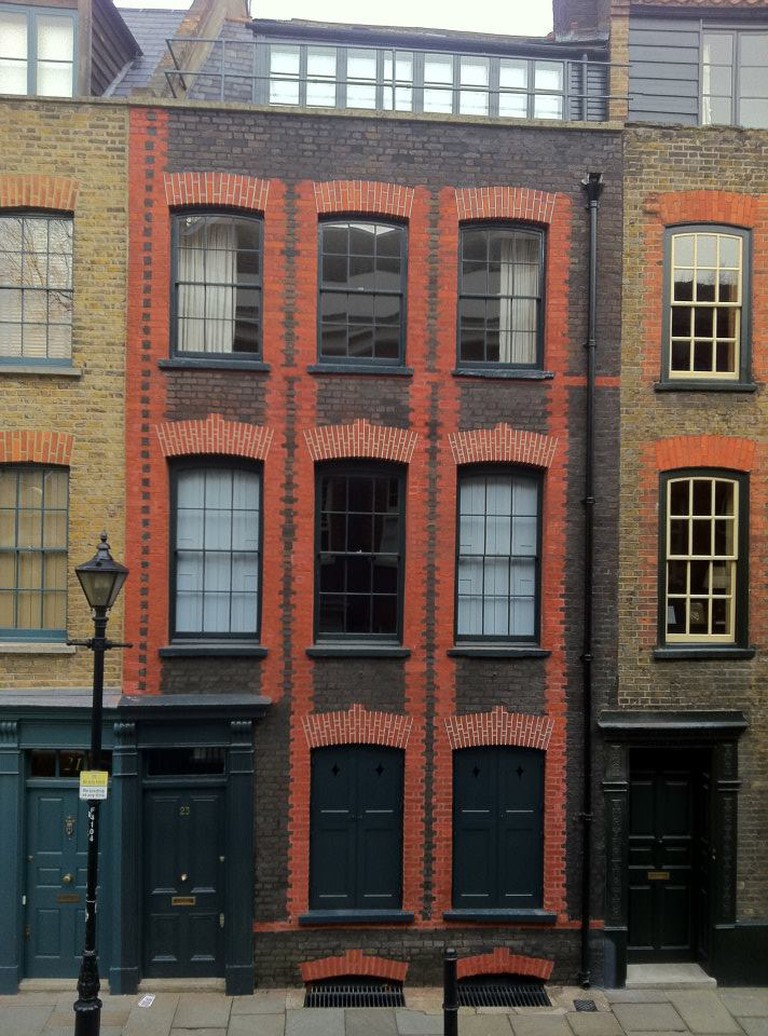 23 Fournier Street | Russianhouse/WikiCommons
This classic east-end street in Spitalfields sits between Commercial Street and Brick Lane and is made up of classic Georgian townhouses. The silk for Queen Victoria’s coronation gown was woven by Signeratt and Bourdillon in number 14. In 1970, the owner Rodney Archer was visiting a friend who lived next to Oscar Wilde’s old house and acquired the fireplace, which had been torn out of the wall as part of renovations. Wilde’s fireplace is installed in the first floor drawing room of number 31. 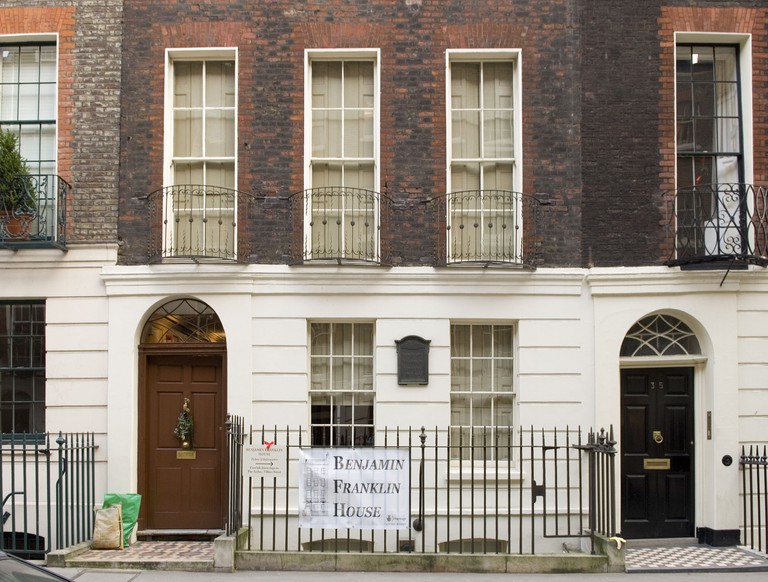 Learn about one of America’s Founding Fathers at Benjamin Franklin House | © Science and Society Picture Library / Getty Images
Built circa 1730, Benjamin Franklin House (near Trafalgar Square) was the home of the scientist, philosopher, inventor and Founding Father of the United States, Benjamin Franklin. Franklin lived here for 16 years, between 1757 and 1775, and the building became the first de facto US Embassy. The central staircase, panelling, stoves, windows, fittings, beams and brick are all original, and the walls have been painted in the colour that Franklin would have known. Now open to the public, the building is the only surviving Franklin residence. Sadly, Franklin didn’t leave any notes on how the house was when he lived here, but a visit comes complete with an ‘historical experience’ that will give you an insight into the house as Franklin would have known it. 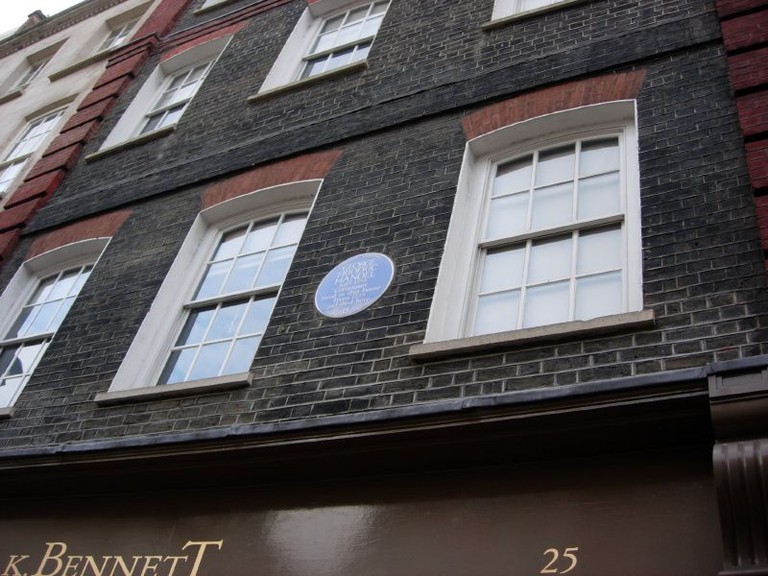 Handel & Hendrix at 25 Brook Street | © Gabriela Avram/Flickr
Among the hustle and bustle of Brook Street in the very epicentre of London sit two unassuming terraces with an extraordinary past. Not only did George Frideric Handel and Jimi Hendrix live at numbers 25 and 23 respectively, but the buildings are also fine examples of typically-elegant Georgian homes, preserved how they would have looked in the 18th century. The entirety of Brook Street was built between 1717 and 1726, but the development was split: eminent architects created grand town houses for the upper classes (including William Pitt) at the Grosvenor Square end, and builder George Barnes built terraces for more modest residents like Handel at the Hanover Square end. When you’re standing in this street, admire the architecture, but don’t forget that there’s something special beneath your feet, too: Brook Street gets its name from the fact that the Tyburn River is channelled beneath it. 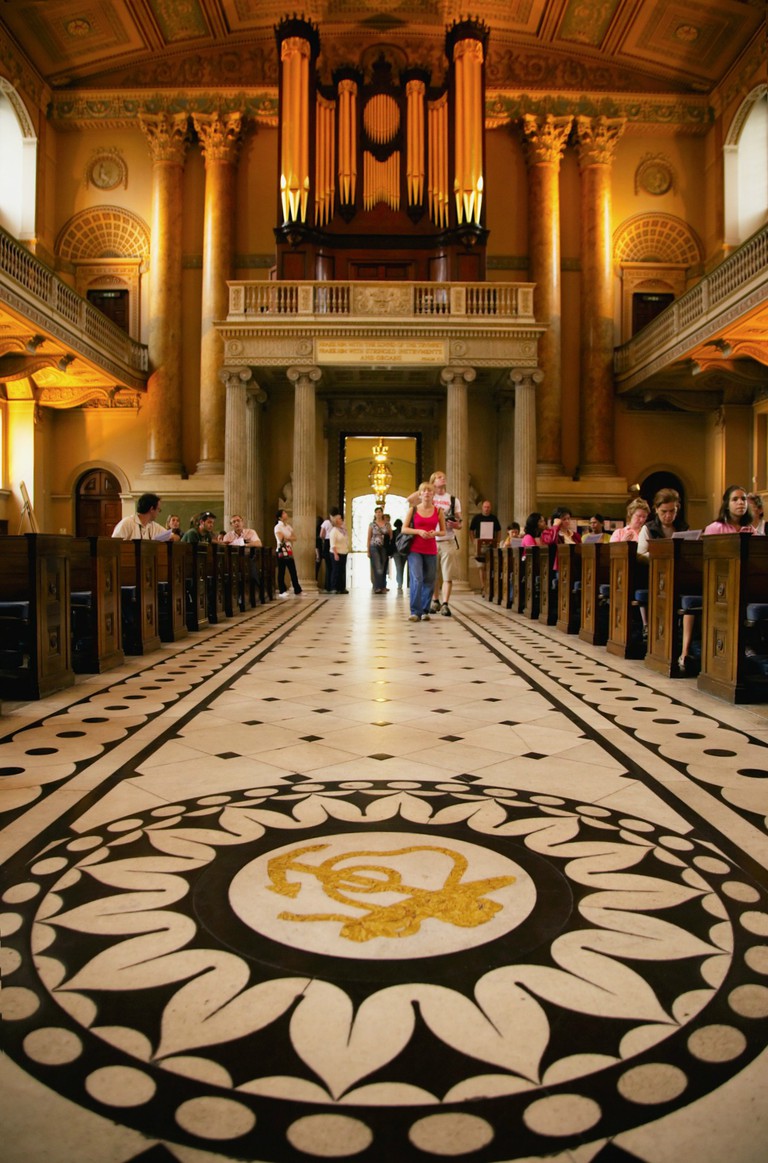 Old Royal Naval College Chapel | © Visit Greenwich/Flickr
The Old Royal Naval College in Greenwich has a rich history, from a favourite of medieval royals and the birthplace of Henry VIII to the education of naval officers in the 20th century. The beautiful chapel was completed in 1789, and is still a working place of worship: services are held here every Sunday and the chapel is open free to the public (along with the magnificent Painted Hall and the visitor centre) every day. 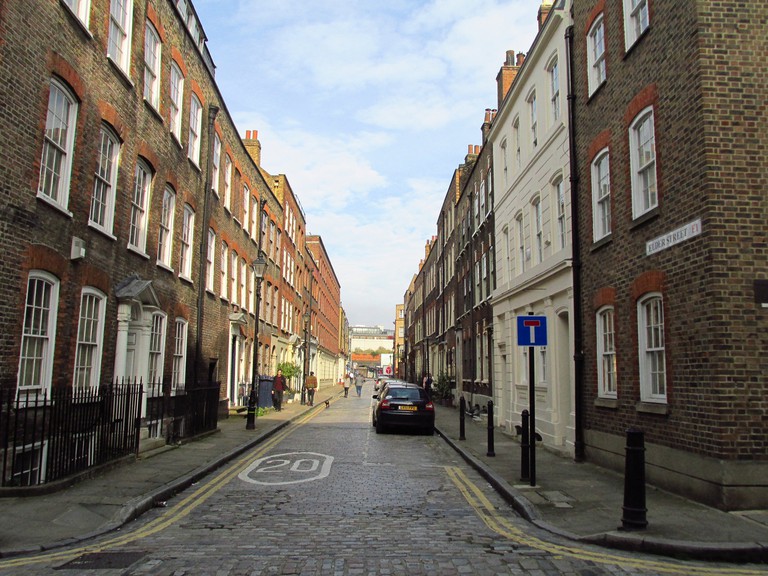 Elder Street | David Holt/Flickr
In 1932, the Copartnership Herald described these rows of Georgian terraces as being, ‘full of tall, staid-looking houses with distinguished doorways showing variety and charm of design. This street has an air of detachment, not to say aloofness, as though it did not desire the acquaintance of the market, which has contributed to the disfigurement of Spital Square.’ And that ‘aloofness’ seems to be popular: the street became the focus of attention as part of the British Land’s bid to redevelop Norton Folgate in 1977, and again in 2015 when the same company planned to do the same. While they seem to be safe for now, now is the time to see these hidden architectural gems before another developer casts their eye over the area… 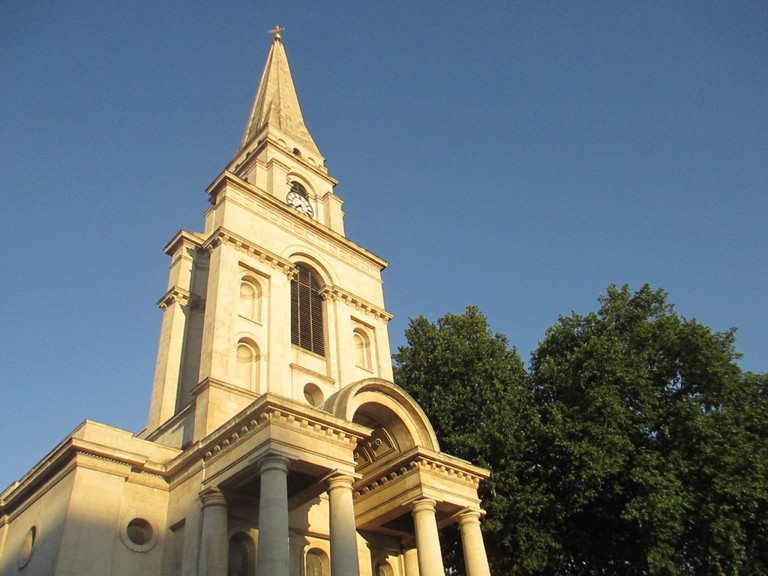 Fun fact: past staff members of the church include Samuel Henshall, who invented the modern corkscrew.
Give us feedback