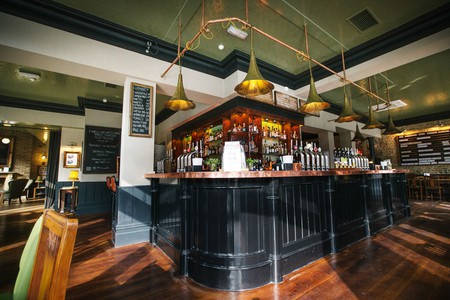 Whether it’s in the gastro-pub land of trendy Askew Road, by the green in the heart of Shepherd’s Bush or around the ex-home of the BBC in White City, Shepherd’s Bush is fast becoming a buzzing centre of West London nightlife, home to a host of wine bars, American diners and some of the best beer gardens in London. Here’s our pick of the best bars, pubs and all-around drinking dens.

This branch of the ever-popular chain of bars by punky craft beer brewers, Brewdog, opened in 2013. It proved an instant hit with locals, who had been relatively starved of the craft beer action that had taken over in other London quarters. There are 40 types of craft beer on tap, alongside cans and bottles, making it a haven for ale-lovers. With the typical great food and vintage arcade games on offer, Brewdog is a great place to kick start your night, or simply have a few beers with friends. 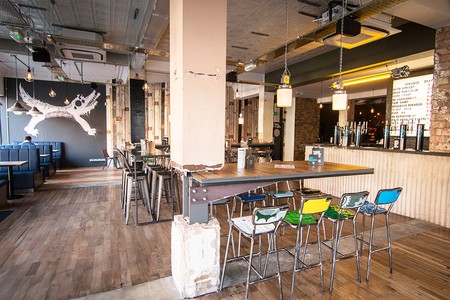 Bar, Wine Bar, European, Italian, French, $$$
Facebook
Email
Twitter
Pinterest
Copy link
Share
Map View
If wine is more your style, you can’t get better than Albertine, a tiny, unassuming, candle-lit wine bar tucked just off the main thoroughfare. It opened in 1978 and boasts over 130 global wines on its menu. The bottles are sold at take-home prices, but 40 can also be ordered by the glass. Closely-packed wooden furniture and low-key lighting give an intimate, Parisian feel, and there’s an extensive list of cheeses and other titbits like mini chorizo to be paired with the wines. If you’re after something more substantial, they also serve mains, with classics such as fish pie and wild boar sausages and mash on offer.
Open In Google Maps
1 Wood Lane, Shepherd's Bush, London, England, W12 7DP, United Kingdom
+442087439593
Visit Website
Give us feedback

The Princess Victoria pub on Uxbridge Road is a pretty impressive-looking place, housed in a restored Victorian gin palace from 1829. Inside, the original features have been spectacularly preserved, with dome-shaped skylights, multiple wood-burning fireplaces, intricate cornicing and a grand central bar. The food on offer, from full meals to bar snacks, has been widely praised, and it sets itself out from competition with a huge wine list featuring over 300 options, with 36 by the glass, alongside plenty of cocktails and real ales. There are also regular tastings featuring the pub’s artisan suppliers. 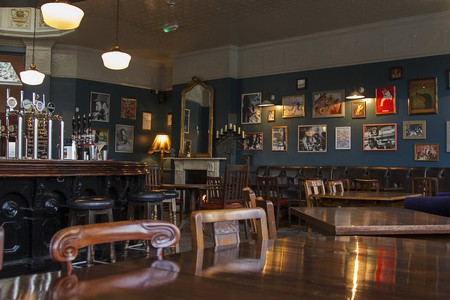 A large, square central bar separates the pub and dining rooms at the Queen Adelaide. This modern gastropub is filled with impressive features, regal wood panelling, retro wallpaper, a chandelier and an unusual domed fireplace. The inside is filled with homey touches, with fabric lampshades hanging from the ceiling all over the place, snug winged leather armchairs and a book swap. The food is typical pub grub with one or two bits of flare, and seasonal real ales are kept on rotation alongside global bottled beers and craft kegs. 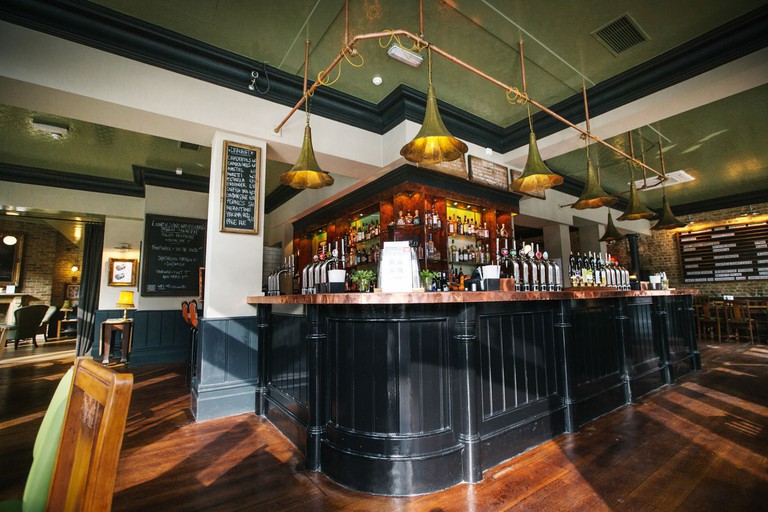 The Defectors Weld, London | Courtesy of Defector's Weld
A firm local favourite, consistently billed as the area’s best, this Young’s pub boasts an impressive, carefully selected drinks menu. The constantly rotating selection of draught lagers and beers has a British focus and is sourced direct from brewers, while European bottled beers and American craft beers are also stocked, leading the Defector’s to be included in CAMRA’s list of top ten pubs in West London five years in a row. There’s also an unusually good cocktail list for a pub, with traditional staples like mojitos alongside contemporary classics such as the espresso martini, and some interesting in-house concoctions. The pub hosts DJs from Friday to Sunday, as well as film, comedy and live music, and there’s an adorable little snug bar upstairs.
Open In Google Maps
170 Uxbridge Road, Shepherd's Bush, London, England, W12 8AA, United Kingdom
+442087490008
Visit Website
Give us feedback

Gastropub, Pub, Bar, Pub Grub, $$$
Facebook
Email
Twitter
Pinterest
Copy link
Share
Map View
The vibrant Sindercombe Social only opened a couple of years ago, but has become a local mainstay despite stiff competition from Brewdog, which is just across the road. The American-themed food menu, billed as ‘the best in melty, stringy, dripping, finger-licking indulgence’, has been devised by pop-up specialists Ruby Jean’s, and is burger-heavy, with some deliciously weird options like a chicken katsu curry burger. There’s a plenitude of drinks on offer at the 360 degree bar, with an extensive list of real ales, exposed brickwork, vintage records on the walls, DJs at the weekends and a programme of live music.
Open In Google Maps
2 Goldhawk Road, Shepherd's Bush, London, England, W12 8QD, United Kingdom
+442087461288
Visit Website
Give us feedback 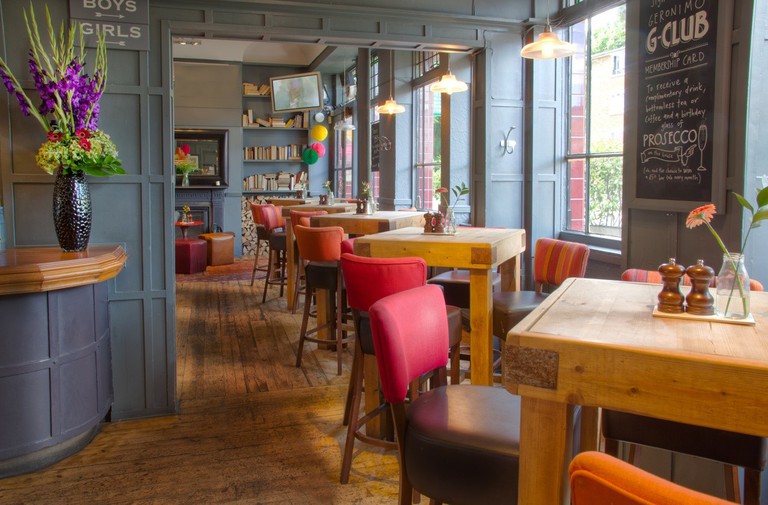 The Eagle, Askew Road London | Image courtesy of Geronimo Inns
The Eagle, of Geronimo Inns parentage, is distinct on this list, while other venues are cool and edgy or regal and handsome, this one is delightfully pretty in pink. Inside, bright, fun décor with colourful accents creates a living room feel. Outside is probably one of London’s best beer gardens, serviced by its own bar and decorated with deck chairs, beanbags, little sunshade huts and bunting, at night, strings of fairy lights, candles and coloured lamps make it a great spot for outdoor drinking or dining. The drinks menu is stocked with modern wines and real ales, while the food menu offers traditional British grub from brunch through to dinner.
Open In Google Maps
215 Askew Road, Shepherd's Bush, London, England, W12 9AZ, United Kingdom
+442087460046
Visit Website
Give us feedback

Located in the sprawling Westfield Shopping Centre, the Shepherd’s Bush branch of Balan’s is a great spot for drinks after a hard day’s shopping. This bohemian-esque bar and restaurant may boast some hipstery, nonsensical straplines, ‘let us banish the jobsworth, the wet blanket, the killjoy’, ‘all hail the rogue, the rascal and the reprobate’, but the inside is all about genuine quirk, with the right amount of eccentric décor (bunches of asparagus in vases instead of flowers and random curiosities in cabinets) as well as an original and exciting food menu. There’s an outdoor terrace as well as a bar area and a great drinks menu, select from a range of wines or a host of unique cocktails, or even sip on champagne and absinthe with the appropriately named ‘Death in the Afternoon’.

Bar, Restaurant, BBQ, $$$
Facebook
Email
Twitter
Pinterest
Copy link
Share
Map View
Technically in Notting Hill but a stone’s throw away from White City and Shepherd’s Bush station, the Garden Bar is an attractive bar and restaurant which boasts, as you might expect, a fantastic outdoor patio and beer garden, the biggest in central London, complete with its own exterior bar under a thatched roof, a nine-square metre screen for showing movies or sport, and an all-day BBQ on weekends. While the garden is a great place to simply sit, drink in hand, it also hosts regular acoustic music sessions and comedy acts.
Open In Google Maps
41 Bramley Road, Notting Hill, London, England, W10 6SZ, United Kingdom
+442072291111
Visit Website
Give us feedback

Bar, Pub, Nightclub, Filipino, $$$
Facebook
Email
Twitter
Pinterest
Copy link
Share
Map View
Bar FM is a very peculiar little place, but the apple of its regulars’ eyes. The intimate members club (membership is free and you can bring guests) tags itself as ‘probably the best nightclub in West London’. Open until late, Bar FM hosts a range of events including live music, DJ nights and open jamming sessions, as well as no-frills karaoke nights which are legendary to those in the know. They serve food throughout the night with a menu inspired by Oriental and Filipino cuisine, the couple who run the place, Mylene and Freddie, are Filipino, with a drinks menu that straddles pub and club.
Open In Google Maps
184 Uxbridge Road, Shepherd's Bush, London, England, W12 7JP, United Kingdom
+442088112807
Visit Website
Give us feedback
Give us feedback