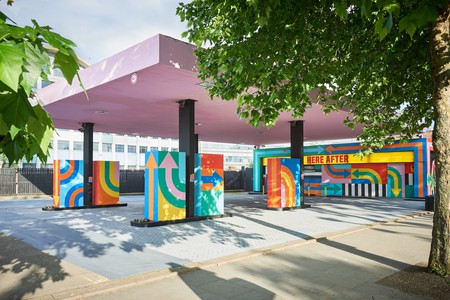 A derelict petrol station on Wood Lane in White City has been transformed by design-duo Craig & Karl into a kaleidoscopic art installation.

For their first major artwork in London, HERE AFTER, Craig Redman and Karl Maier were inspired by the petrol station’s close proximity to the BBC’s former headquarters of Television Centre.

Using the bright colour scheme of a TV test card, they’ve given the petrol station – painted by Global Street Art – a new lease of life as a destination for the public to enjoy. 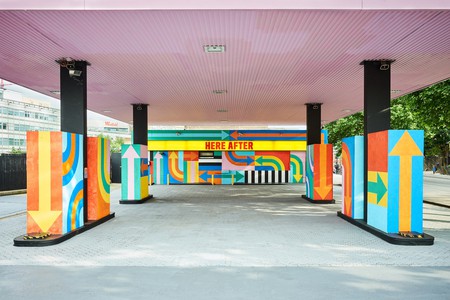 ‘We view this project as the petrol station’s second life, or ‘wonder years’, which led us to use the words “Here After” as a reference to heaven or utopia,’ said Craig & Karl. ‘Now that the petrol station has fulfilled its duty, so to speak, it’s free to enjoy itself.’

Known for their vibrant, large-scale and distinct international projects, college friends Craig & Karl have a very unique practice as they collaborate transatlantically from their respective New York and London studios.

Since starting to work together in 2011, they’ve racked up quite a client list that includes LVMH, Google, Nike and Kate Spade. From creating installations out of candy pieces in Chengdu and designing capsule accessories collections for MCM to exhibiting at the Museum for Contemporary Art in Mexico and working on charity initiative Bikes for Humanity, there is no project too small or large that the duo can’t put their graphic twist on. 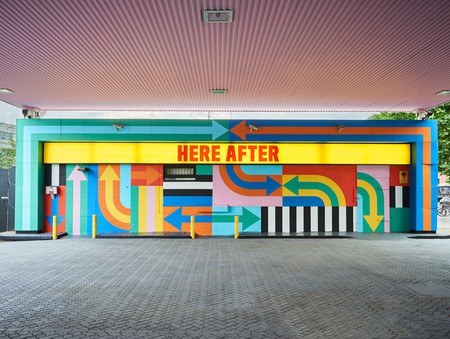 ‘We expect that this artwork will become a real draw, as well as a point of pride for the local community,’ said Alistair Shaw, Managing Director of Television Centre.

HERE AFTER is located just next to White City underground station on Wood Lane and forms part of the initial stage of a major £8 billion regeneration of the area, made famous by the iconic BBC Television Centre.