In the rooftop room of the Ace Hotel, a group of millennial women are sipping wine and chatting about their careers. The event, hosted by Women Who, a network for women who work in the creative industry, feels more like a cool girls cocktail hour than a career night.

‘Being a woman in the workplace is a different experience than being a man,’ founder Otegha Uwagba tells me in a separate interview. ‘With Women Who, we’re creating a platform and community that recognises that difference.’

Formerly at AMV BBDO and Vice, Uwagba left her job to go freelance in 2016. ‘But I missed having connections with people, especially women,’ she says. Starting with a newsletter, meetups and career masterclasses, she created Women Who ‘to help women like me, who haven’t really figured it out yet’.

In the run-up to the launch, Uwagba self-published Little Black Book: A Toolkit for Working Women. ‘Someone who bought a copy got in touch with me via Instagram and said she wanted to introduce me to a friend of hers. That friend is now my editor at [publisher] Fourth Estate. It’s not how 99% of book deals happen,’ says Uwagba, ‘but it speaks to the power of networks.’ 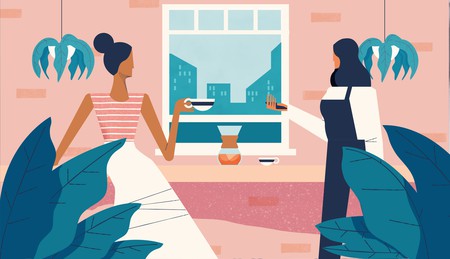 Across London, female-focused networks are transforming women’s professional lives. An antidote to the old boys’ club, women’s collectives today are evolved, inclusive and specialised – among others, there’s Marguerite, for women in the visual arts, She Said So, for women in the music industry and DevelopHer, for women in tech.

Like a Pinterest board come to life, the office has Eames-style chairs, a white ostrich feather lamp and a lashing of the millennial pink that’s become synonymous with the entrepreneurial, Insta-worthy brand of third-wave feminism these collectives embody.

But Li makes it clear the space is about more than pastel hues and hashtag feminism.

Blooms flourished ‘out of a real need for a work and social space that provides a welcoming environment to ambitious founders, whatever gender, race or religious beliefs they have,’ says Li. ‘We want to give everyone fair advantages to achieve their professional and personal aspirations and grow as entrepreneurs and individuals’.

Under a framed ‘The Future is Female’ sign, men work on laptops on the velvet-covered sofas. ‘We’re not exclusive. It’s not women only,’ explains Li. ‘We’re just catering for women’s needs and wants.’ A concept in 2017 that seems both glaringly obvious and somewhat revolutionary.

The first co-working space in Shoreditch to offer an on-site crèche, Blooms has a flexible, credit-based workspace memberships starting at 12 days, club sessions with mentors, experts and investors for support with growth and 24/7 access, including weekends – elements of Li’s philosophy for the space that’s ‘rooted around the principles of community, flexibility and creating a comfortable, yet professional work environment’.

‘We want Blooms to fit into your life, rather than the other way around,’ says Li. ‘It’s a need I see with women in particular. Some 80% of women become mothers at some point in their life, and that is a huge disruption for working life. We want to provide an infrastructure that makes it possible.’

‘For a long time, the conversation about gender equality [in the workplace] was just about the pay gap,’ says Li. (Women still earn 18% less than their male colleagues in the UK, according to the most recent government figures). ‘In recent years, there’s been a fundamental shift in the conversation about gender equality going on all over the world.’

The recent wave of revelations about the pervasive nature of sexual harassment across industries have helped ‘more and more people, including men, increasingly recognise the big differences that really exist [between men and women’s experiences] in the workplace,’ says Li.

The trend has coincided with an age of austerity, stagnated wage growth and the rise of the ‘digital nomad’ worker. In the US, the election of Donald Trump, the Women’s March and the #MeToo movement has led to a peak moment for feminist issues.

‘In London, the shift in focus towards female founders isn’t necessarily rooted in the same political issues as the US, but it is a reaction to this global conversation,’ says Li.

‘More and more people are leaving “proper careers” to be self-employed, opening up their minds to flexible working and other means of generating income, discovering the alternative of being self-employed – of entrepreneurship, of creative and location freedom, of integrating their interests and hobbies and passions into their work – which is something I think a lot of women [in corporate jobs] have had to suppress before,’ says Li.

‘It goes together with this increasingly popular notion of seeking personal fulfilment in your work,’ says Li. ‘I think that for millennials, following a corporate career path is the most un-inspirational thing ever – and so entrepreneurship and the startup ecosystem is thriving. But like the corporate world, it’s also male-dominated.’

‘I think a lot of women’s networks have sprung up in recent years in reaction to the “bro” culture of the startup scene, which I think is very aggressively male and doesn’t necessarily accommodate women,’ says Uwagba. ‘I felt like we needed a space for women to work and network away from that male-dominated office culture.’

‘The reason I created the group was to help improve women’s lives and careers. It’s about women helping women,’ says Uwagba, whose most recent career masterclass cost £12 a ticket. ‘It would be at odds with my personal values for Women Who to be inaccessible or exclusive.’

‘It’s about women helping women. Every member is committed to help one another; we believe that a “rising tide lifts all ships” ‘, says Li. ‘I think it’s a very appealing proposition for society overall.’

For more on women in tech, check out It’s 2017, and Female Entrepreneurs Still Aren’t Being Funded Equally.