The Ultimate Christmas Gift Guide for Every London Stereotype 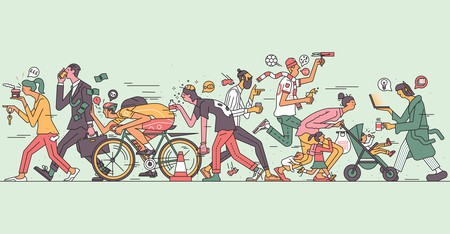 From the lycra-clad cyclist to the outer-borough homeowner in ‘up-and-coming’ Zone 98, our tech editor matches the Londoners you know and love with the must-have gifts of the season.

Risking life and limb just to avoid the 8am tube, the city cyclist can be found battling with an Uber in the bus lane. If you want them in one piece next Christmas, give the gift of safety this holiday season. The Hövding Airbag Helmet looks like a scarf but deploys into a shock-absorbent head airbag in the event of a crash. A little wild, but this person literally cycles on the streets of central London – they appreciate crazy.

They’ve done the impossible – bought a place in London. Help them feel better about dropping half a million pounds in ‘up-and-coming’ Zone 98 by transforming their new pad into a smart-home. The voice-controlled Amazon Echo smart speaker plays music, makes to-do lists, sets alarms, streams podcasts, plays audiobooks and provides weather, traffic and other real-time information. It also works as a home automation hub, meaning your outer-borough friend isn’t just someone with with a two hour train journey – they’re a smart-home owner.

The much maligned hipster. Let’s face it – London wouldn’t be London without them. Beoplay’s H9 Wireless Bluetooth Headphones offer uncompromising sound quality (perfect for obscure bands), a bold, over-ear style that says ‘I don’t have time to talk to you, I’m busy being trendy’, and active-noise cancellation, so they can focus on the vegan startup they’re launching with their mates from the Hackney art collective.

The dream of being a parent is now the real-life nightmare of child rearing. This year, give the gift of silence. The iPad Pro 10.5″ can run a bajillion apps, stream videos and is guaranteed to keep the little ones occupied for at least half an hour. (Not really, obviously, but at least for a while.) A moment of peace – truly a gift for the whole family.

The Google Home smart assistant is a natural choice for the City slicker who’s well-versed in the art of ordering around an assistant. Just say ‘OK Google’, and the device will tell you everything about your day, from meetings to flight times and more. The smart speaker and home automation hub gives proactive updates ahead of scheduled events and lets users add reminders and calendar appointments, meaning your high-flying City friend will never miss a meeting.

They left their desk job for a life of ‘creative autonomy’ as a freelance graphic designer (or copy editor, or photographer, or whatever). Once dreaming of flexible hours in a trendy co-working collective, they now spend their days mainlining coffee in sweatpants from their living room couch. Feed their caffeine dependency with the Nespresso Vertuo Coffee Machine. The high-end device recognises Vertuoline coffee pods automatically, meaning more time for dealing with demanding clients, and less time programming the perfect cup.

Ah, student life. The best of times, the worst of times. Poor but happy, when life was simpler and partying ’til 6am several times a week felt like a good idea. Gift them the Instax Mini camera so they can instantly snap and print their memories into physical photos. If they’re dedicated to their smartphones, the HP Sprocket connects to any mobile to print stickable snapshots whenever the moment strikes.

Go down the pub, find the football fanatic in your life and gift them the Xbox One X. A powerful console for immersive 4K gaming, they’ll go from shouting at the football match to shouting at the hyper-realistic football game they’re playing. The console can also play Blu-ray and stream video on Netflix, Amazon, Hulu and more. Netflix’s latest football docu, anyone?