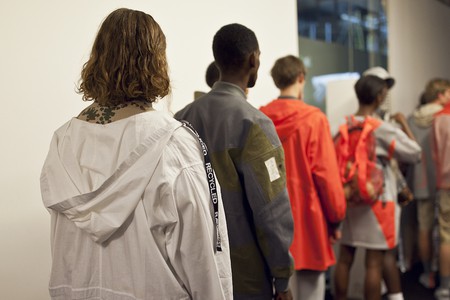 ‘Everything was worn with cowboy boots, many of them gold. They made me think of Myra Breckinridge, possibly Galliano’s sly way of underscoring that all fashion is drag,’ wrote Tim Blanks recently in his review of Maison Margiela’s couture show.

That fashion is about performance is not new. Generations of designers have used clothes to explore ideas, and in the process align thought with physical realisation. Martin Margiela, Raf Simons, Rei Kawakubo, Vivienne Westwood et al. have all laid ground here, rigorously investigating what it means to be human through the medium of style. And, at its most basic, getting dressed is performance; whether you choose jeans or chinos, shirt or polo, it is a reflection – conscious or otherwise – of your preferences, of how you see the world, of what you’re drawn to and of how you’d like to be perceived.

Yet Blanks’s comment seems a perfect summary of the new wave of performance present on catwalks for SS18. While couture has always had spectacle at its core, the menswear shows in London this season allowed theatre to be the locus of their design energy – this time, it wasn’t about the clothes as much as it was about the setting within which they were exposed.

Free from the usual staging with the usual models, the new menswear designers harnessed the opportunity to expand, and build upon, ideas around gender and identity. Whether it was Charles Jeffrey’s florid pink dancers, who punctuated the show with jubilant moves and raw energy, Liam Hodges’s giant, crazed-looking teddy bear, Bobby Abley’s Teletubbies, or Grace Wales Bonner’s highly stylised and precise choreography, there was a sense that menswear had moved beyond the clothes; it’s how the clothes are performed that matters now.

So what does a Teletubby on the catwalk say about masculinity?

Well, nothing as such. But when juxtaposed with a collection that saw men walk in mini pink tutus and tight-cropped tops, or dalmatian-print parachute pants with fringed bumbags, these children’s cartoon characters represent the culmination of that sense of play and absurdity.

Clothes are about character, and there’s finally a new cast in the theatre of fashion. It makes a mockery of convention and expectations of what the format should contain, and in doing so also shines new light on what menswear is.

Charles Jeffrey has built his reputation on the way he marries performance with fashion. Outside the catwalk, his Loverboy night offers a space for culture and style to intertwine in a sweaty and fervid way, but he operates this tension within the mainstream too. For his first solo show, the designer walked giant papier mâché figures alongside his beautifully tailored constructions, while for SS18 catwalk Charles Jeffrey opened with a fluorescent pink dance troupe, and the models were covered in doodles, face paint and stickers. Again, subversion of the traditional catwalk format allowed for a more fluid approach to menswear.

To the extent that Charles Jeffrey is full of energy, colour and chaos, Grace Wales Bonner is precisely the opposite. Controlled, specific and minimal, her designs have gained great reviews and swathes of love from the industry. The London-based designer’s new approach puts lengthy theses in front of editors, and soaks her fiercely intellectual design angle into every facet of her presentations. Tailoring is central to her aesthetic, 70s influences blending together with inspiration from the streets of Dakar and London. Each garment is perfectly finished, with collections rendered in neutral shades, the occasional flash of colour dipped in. Unlike other designers, Wales Bonner has spurned the pursuit of viral hits in favour of extremely secretive and closed fashion shows, put on for a select group of editors and industry figures only.

The catwalk has therefore become a format in which designers can showcase clothes, but more importantly investigate what it means to be male in the current cultural landscape.

This movement towards creativity over commercialism reflects the widening chasm between London’s ability to launch new talent and foster emerging designers, and to build sustainable businesses. Platforms such as Fashion East and MAN are almost unparalleled in the industry for giving new talent an international stage – Paris, Milan and New York offer nothing as prestigious.

Yet fashion is a multi-billion dollar industry, and these young creatives need to sell as hard as they challenge convention. Offering new narratives around identity can be doubly powerful if people actually buy into the change. A crucial disparity is that the emerging designers speak to younger, or specifically fashion crowds. Purchasing power often comes from the older generation, who are more affluent and also more traditional in their approach. As an example, Westminster has only in the last few weeks relaxed its rules on wearing ties in parliament. The question, then, is how do these sartorial activists engender change within the system, as opposed to away from it.

Outside of London, some designers have made headway. Eckhaus Latta, a new(ish) New York label has experimented with taking their ideology to a commercial level, running an ad campaign which depicted diverse couples having sexual intercourse. While it certainly generated a lot of hype, their reliance on sex arguably negated the move towards showcasing something different and changing the conversation; in spite of its explicit content, the result was kind of the same.

The digital age offers new platforms for women to express themselves, celebrate their bodies and dismantle patriarchal ideas of what femininity is. Fashion is no longer didactic in terms of what it says women should look like, with major brands such as Marni, Gucci and Prada offering alternative ‘ugly’ narratives. And in terms of fashion, couture has also always delivered – with the caveat that of course the models who walk come under immense pressure to look a certain way – a sense of theatre. By which I mean: there has been womenswear-as-art for some time now.

Breaking down binaries from both sides

The same cannot be said for menswear, and if gender fluidity and binaries are to be broken fully and in ways that will last and develop then the revolution needs to happen here too.

Thus the challenge for men now is to overcome the commercial demands of ‘masculinity’, while also welcoming a new era of catwalk shows that take this new fluid approach to gender into the wider world. How long do we have to wait before a male politician goes into Parliament in a skirt and isn’t greeted by mass derision? In cultures and religions across the globe, skirts and tunics have been worn by men for generations: the West is lagging far behind.

It’s time for the leading menswear designers to take up the work started by London’s finest emerging talent and offer a new idea of ‘male’ style on the mainstream platforms. Here’s hoping 2018’s biggest trend is the unisex skirt.