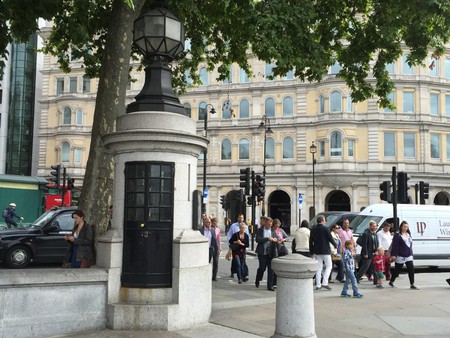 If you’ve ever found yourself wandering around Trafalgar Square you may have noticed a tiny round cubicle in the corner, which many believe to be the smallest police station in London.

In actual fact, this is a complete myth…it’s never actually been a police station. Being roughly the size of a tiny toilet, the box could probably hold no more than two people (or prisoners) at a time!

Over the years many have claimed the peculiar looking box is London’s smallest police station whereas others have more accurately stated that it’s a box for the police, to observe the happenings of Trafalgar Square.

Throughout history Trafalgar Square has been used as a rallying point for political protests and because many of these were incredibly spontaneous, occurring without announcement, the police saw it fit to have a point whereby they could summon help if need be.

When the telephone was invented in the 19th century, the police saw this as an opportunity to install telephone boxes around the country, to help communications with nearby stations. A wooden telephone box was created next to the Underground station entrance on the south east side of Trafalgar Square, which was also known as a ‘silence cabinet’. However, this was only a temporary makeshift measure and after World War I police campaigned for the box to be renovated and made more permanent. Sadly for police, public objections made these plans very difficult. 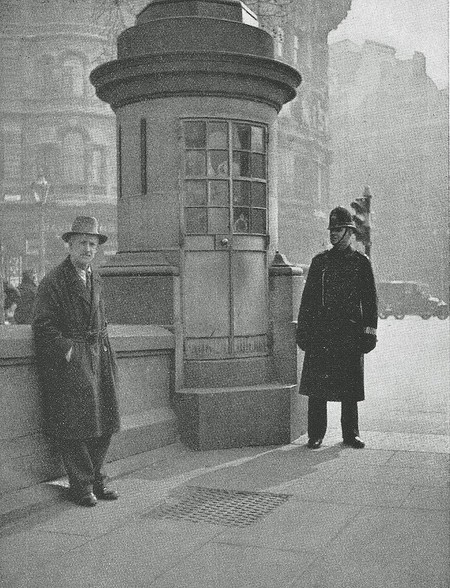 Despite government protest over cost of the box, approval was eventually given for a freestanding police box and a plan to hollow out a light fitting for the box was presented to the Permanent Under-Secretary of State at the Home Office, Sir John Anderson, the man who later became famous for the World War II Anderson Shelter. He approved the estimated £550 cost of the observation box, stating that the money was justified for the location and purpose.

The light fitting in the corner of the square was hollowed out and a narrow set of windows were installed to provide vital views across the square, then most importantly, a direct phone line to Scotland Yard was created. It was designed so that whenever the police phone was ringing, the light on the top of the box would flash, alerting nearby officers of any trouble, even if they couldn’t hear the phone.

Despite having a fascinating history, the box is no longer in use due to radio communications being introduced in the 1970s, proving a more efficient system for the police. Instead, today the police box is used as a cleaning storage cupboard for Westminster Council cleaners!