The History Of The Ritz In 1 Minute

Courtesy of The Ritz London

Nothing can ever prepare you for when you step into The Ritz London for the first time. Or even the time after that. Located in the bustling borough of Mayfair, London’s most iconic hotel stands tall and proud, welcoming you into a warm, golden glow accompanied by the sound of grand pianos. Renowned for their quintessentially British afternoon tea, this hotel is synonymous with luxury.

The building originally opened on 24 May 1906. Owned by the renowned hotelier César Ritz, The Ritz was rebuilt on the site that was once the Bath Hotel. In the early 20th century this was a very unique hotel, not only for its architecture, but because each guest-room had their own bathroom, the rooms featured double glazing, and the beds were made of brass (instead of wood). This was a big step in, what was clearly, the right direction.

This building featured an architectural design – created by Frenchman Charles Mewés and Englishman Arthur Davis who formed a partnership in 1900 – that made it the first steel framed building of any significance in London. The detail and articulation that has gone into building this structure is remarkable, right down to the fine chimneys and large copper lions standing high up on the roof. 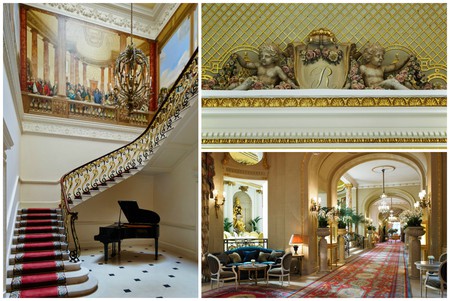 The Ritz | Courtesy of The Ritz London

Inspired by the French chateau style architecture and featuring Louis XVI décor and antique furnishings, the interior of The Ritz is just as impressive as the exterior, boasting a unique colour palette: salmon pink, rose pink, yellow and blue. Chandeliers are hung high from every ceiling, neo-classical décor is mixed with contemporary technology and the views overlook Royal Green Park or Piccadilly.

The Ritz has always attracted the famous and the fashionable. The Prince of Wales has visited, the Russian Prima Ballerina Pavlova danced here, in 1921 Charlie Chaplin required 40 policemen to escort him into the hotel, and the talented Nöel Coward wrote songs within the walls of this building. Honouring its high calibre of visitors and service, in January 2002, His Royal Highness The Prince of Wales awarded The Ritz with the prestigious ‘Royal Warrant for Banqueting and Catering Services’ – making it the first and only hotel with this honour.