The Rise of Mindful London 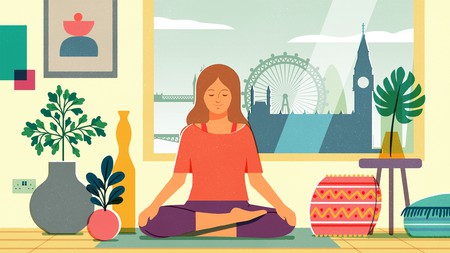 Londoners’ lives have never been busier, but people are beginning to recognise the importance of pressing ‘pause’. Mindfulness has quickly become the 21st-century tool for finding headspace – and nowhere more so than in the UK capital, where meditation studios and wellness experiences are popping up on every street corner. London, it appears, has found its Zen.

Nestled in a room above a gridlocked street in Fitzrovia, 45 strangers sit on yoga mats and plush velvet cushions. There’s a Financial Times journalist, a lawyer, a banker, a nutritionist and a handful of students. The room turns silent as the attendees close their eyes, focus on their breath and begin to meditate. They’re here for Quiet Club, a London-based monthly gathering that aims to expand the conversation surrounding modern mindfulness.

Tickets for the event, hosted by LA-born meditation guru Michael James Wong, sell out within hours of being released. Over the last two years, more than 5,000 people have signed up for Quiet Club, which is organised by Wong and his team at Just Breathe, a community-driven mindfulness project he founded in 2016. In addition to Quiet Club, Just Breathe’s Grand Gatherings see thousands meditating in iconic locations across London such as the British Museum and the Shard.

Enthusiasm for meditation is booming in the capital. In the last year alone, 32 percent of Londoners have learned mindfulness, according to research by Mintel, and meditation studios are popping up across the city. Will Williams – a renowned practitioner in the field – offers courses in the heart of Shoreditch that have a month-long waiting list. He teaches Vedic meditation, the world’s oldest meditation technique that encourages users to repeat a silent mantra. The theory is a mantra provides a point of focus, allowing the mind to more easily switch off.

Those who have previously struggled with traditional forms of meditation are also seeking out sound baths. A healing therapy that uses sound to induce a meditative state, sound baths have shed their hippie status and are on offer at some of London’s trendiest spots. It is believed the sound created by various instruments – often a mixture of gongs and Himalayan metal or crystal singing bowls – can help reduce brainwaves to a ‘theta state’ (out of the ‘thinking’ mind), aiding relaxation, creativity and natural healing.

The capital’s first meditation studio, Re:Mind, offers weekly sound-bath sessions just moments away from Victoria station, and its premium facilities (including a juice bar) are on par with some of London’s top boutique fitness studios. Elsewhere, sound workshop Sound Sebastien has become one of the city’s buzziest pop-ups, having appeared at Stylist Live, the London EDITION Hotel and other wellness festivals. Co-founder Jasmine Hemsley believes sound baths are the ultimate antidote to urban life, helping stressed-out souls to unwind and tackle anxiety.

Even fitness studios are getting in on the act. Fast-paced HIIT sessions and gruelling workouts are falling out of favour as studies show they raise levels of the stress hormone cortisol, which can lead to irritability, depression and poor sleep quality. Low-impact classes such as yoga, pilates and barre are trending in the UK capital and there are now 56 studios on ClassPass (a London-based class-booking app) that offer meditation sessions.

A new wave of treatments is also on hand to reduce stress levels and supercharge recovery. Sweat rituals have long held their place in the wellness world (think Moroccan hammams and Japanese onsens), but thanks to new technology, saunas are making a comeback. Infrared saunas, which warm the body from the inside out, are popping up across London and guarantee the ultimate in relaxation. The demand for sauna pods at wellness studio Glow Bar on Mortimer Street has been non-stop since its opening in the summer of 2018, according to owner Sasha Sabapathy. Studies have suggested that infrared saunas can help with diseases such as chronic fatigue syndrome, as well as depression and anxiety.

Londoners could use some time spent in a worry-free state. Living in a city carries with it a nearly 40 percent higher risk of depression, according to the Centre for Urban Design and Mental Health.

Practitioner Will Williams, who found meditation nine years ago after suffering from work-related burnout, believes the surge in mindfulness’s popularity correlates with the increasing demands placed on fast-paced urbanites. “The stress crisis we are exposed to is reaching epidemic proportions,” he says. “It’s becoming even harder to keep up with the hamster wheel and people are beginning to realise meditation is the most powerful antidote we have against stress.”

Williams may be onto something. In 2011, a Harvard study found that meditation had the potential to actually change the structure of a person’s brain. It revealed that eight weeks of mindfulness can significantly reduce stress, anxiety and fear, and can bolster the brain’s ability to retain new information and regulate emotions.

Being mindful can also help city dwellers reconnect with themselves and each other. This is something that Wong, who wrote about the importance of mindfulness in his book Sit Down, Be Quiet, believes we are craving. “In a world where the majority of conversations are held via technology, people are looking to share and reconnect as a community. Despite being one of the busiest cities, London can be extremely lonely,” he says.

With the demands of modern life becoming increasingly difficult to handle, being mindful has never been more relevant. Health experts agree that paying attention to our wellbeing is paramount and, in London, the mindful tide is turning. “Londoners are seeking ways to slow down – we’ve realised living in a constant state of anxiety isn’t healthy or sustainable,” says Williams. And, with meditation being “no longer reserved for monks on a Himalayan mountaintop,” now’s the time to get some headspace.