The Rise and Fall and Rise Again of Britain’s Lidos 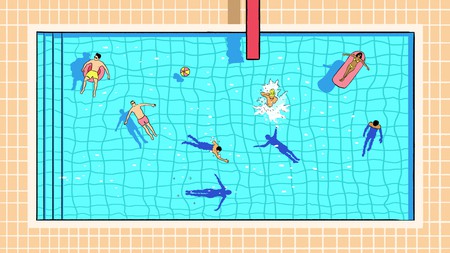 Britain’s outdoor pools, once symbols of a new era of leisure, fell into decline in the latter half of the 20th century. A renaissance, thanks to the efforts of community groups, has seen the lido resurface as a place for urbanites to find sanctuary from the city.

Thousands flocked to see Roy Fransen’s “Sensational Dive of Death.” Spectators, their necks craned skyward, marvelled as Fransen scaled a vertigo-inducing diving board, set himself alight and plunged headlong into the pool below. The record-breaking diver would emerge triumphant (and extinguished) from the waters to acknowledge the cheering crowd.

Through the late 1940s and early 1950s, Fransen performed his fiery demonstration of gravity to suntanned masses at lidos across the country, billing alongside other novelties like water-polo tournaments and synchronised swimming. Though few in the crowd knew it, Fransen’s showpiece marked the pinnacle of an era of leisure that had begun in the 1920s. For years a summer convention for holidaying Brits, these open-air pools were poised to enter a precipitous decline, only to quietly reappear, albeit in an altered form, some 50 years later.

Mid-’20s Britain was shaped by a burst of state-sanctioned energy, which mirrored newfound enthusiasm for communal exercise in mainland Europe. Of particular interest was Germany’s fervent indoctrination into the cult of physical fitness. In response, local municipalities in the UK were encouraged to build lidos as a matter of national importance, and during the 1920s and ’30s hundreds popped up across the country. Under the stewardship of London County Council chairman Herbert Morrison, 13 outdoor pools were built between 1920 and the outbreak of the Second World War, in line with his ambition for London to become a ‘City of Lidos’. 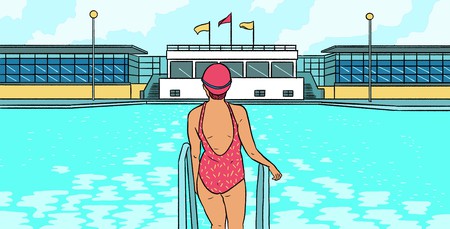 The name lido stemmed from an island in the Venice Lagoon where Europe’s elite bathed and frolicked in the 19th century; it soon became shorthand for any fashionable European beach resort. In Britain, it seemed a natural way of imbuing these new structures with the liberal deportment of the continent. Moreover, the sophisticated nomenclature resonated with an upwardly mobile working and middle class who found themselves with better wages and more free time than at any point in history.

What began as a public health movement introduced the concept of leisure, hitherto reserved for the aristocracy, to everyday folk. Hugely popular, lidos quickly became conduits of social change where, for the first time, men and women mixed freely. And because they were shorn of their daily attire, it was virtually impossible to determine which social stratum anyone belonged to. In 1936, Sir Josiah Stamp, a director of the Bank of England, captured the mood: “Bathing reduces rich and poor, high and low, to a common standard of enjoyment and health. When we get down to swimming, we get down to democracy.”

The new attitude was reflected in the architecture. Designers smoothed off the hard edges of the Bauhaus to create curvilinear concrete forms with flat roofs, expansive metal-framed windows and gleaming white sun decks. Still, the first lido commissioned in London – Tooting Bec (1906) – was a humble affair. Predating the Modern movement by roughly 20 years, it began life as a watery rectangle in a corner of Wandsworth Common with minimal facilities. Those that followed were far more ambitious. Take Finchley council’s magnificent 1931 effort, which channelled Rome’s Palazzo della Civiltà del Lavoro in its rhythmic arched arcade, or the handsome brick symmetry of Parliament Hill Lido. 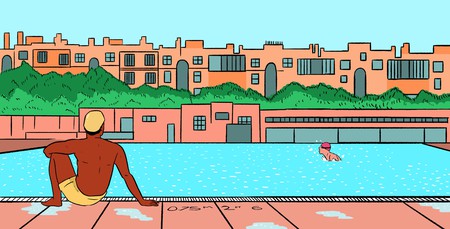 Parliament Hill was the last of London’s showcase lidos, but the movement found its architectural apotheosis in the elegant ocean-liner curves of Saltdean Lido in Brighton. Echoing Mendelsohn’s De La Warr Pavilion at nearby Bexhill-on-Sea, it was, and is today, the epitome of seaside glamour, a sinuous temple to the sun.

Completed in 1938, Saltdean quickly ran into problems, which presaged a darker horizon. It was bombed during World War II and didn’t fully reopen until 1964. By then the fortunes of lidos were waning. Television slowly killed off the live shows – a demise hastened by the removal of the high diving boards, which, like so many of life’s giddier pleasures, fell victim to health and safety legislation. But what really drained the dwindling reserves of public enthusiasm was the advent of cheap package holidays to Europe, where good weather was guaranteed. Once you’ve acclimatised to a week of sun in the Med, the case for an outdoor pool on a blustery English Saturday is hard to make. 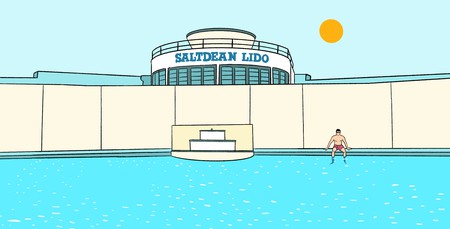 As Fransen made his final leap – tellingly not at a lido, but a fatal plunge at the 1985 Northolt Air Show – outdoor pools were teetering on the brink of closure. Crippling maintenance costs and falling attendance had turned these former bastions of public betterment into millstones around the necks of local councils.

The story might have ended there but for a renewed interest in Modern architecture that took hold in the late 1990s, thanks to campaigning organisations like the Twentieth Century Society. Lidos were held up as worthy of preservation owing to their rich cultural and architectural heritage. There were grassroots movements, too. Earmarked for demolition, London Fields Lido was saved by an implacable residents’ group, which faced down the local council and bulldozers. Thanks to the group’s efforts, it reopened in 2006 – a triumph of energy and communal spirit that figureheads like Morrison and Stamp espoused back in the 1930s. Today, it welcomes a quarter of a million swimmers annually. By way of comparison, in 1947 nearly 200,000 people paid to swim at Finchley Lido.

Similarly, Saltdean narrowly escaped the wrecking ball thanks to an equally persistent community – it seems unthinkable the destruction of such a beauty was ever contemplated – and reopened in June 2017. Restoration work on the main building continues. Some pools, like Victoria Park Lido, were lost forever, or as in the case of Finchley were reborn as leisure centres. Others survived and thrived. 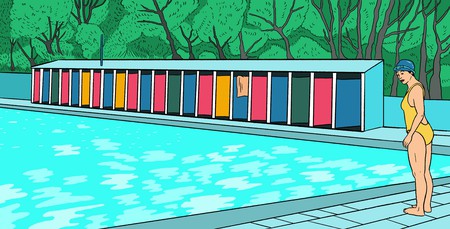 Tooting Bec, for example, shed its prosaic beginnings by installing brightly coloured changing cubicles and an Art Deco-style wedding-cake fountain. In 2018, Parliament Hill Lido – a crucible of North London diversity – celebrated its 80th birthday and has been granted listed status. While the days of spectacle are well and truly over, lidos have evolved into places where busy urbanites can seek sanctuary from London’s heat and noise. Their renaissance, certainly in the capital, is a quiet success story without which the city and its communities would be far poorer.