The Prettiest Residential Streets in London 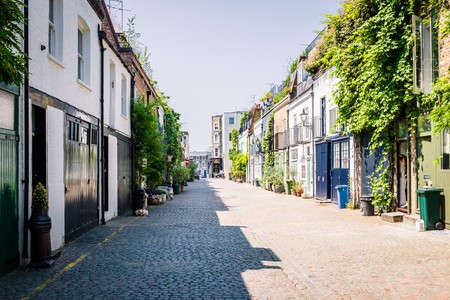 London’s housing is spread among a zigzagging jumble of streets – the city is an architectural jungle, with brightly-painted Victorian houses, cobbled mews, and wisteria-draped passages. We take a look at 10 of the most picturesque residential streets in the capital. 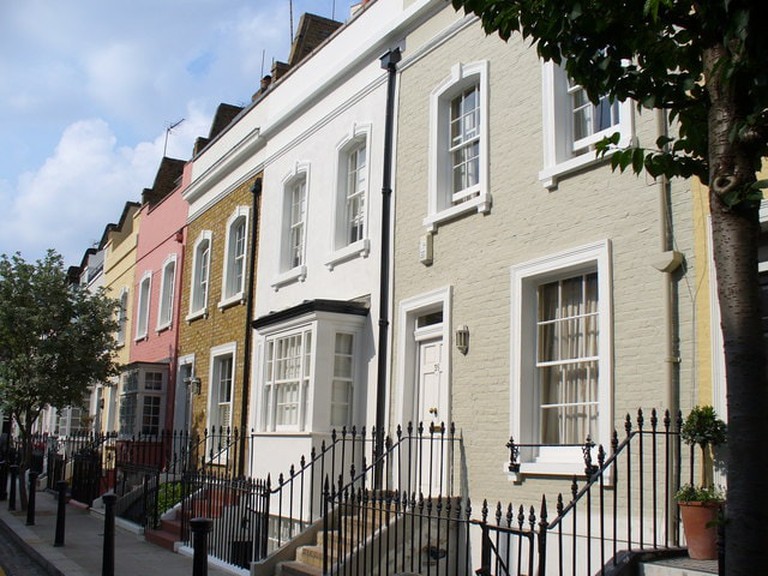 The perfect cure for those January blues, this colour-coordinated street in Chelsea is packed with pastel-painted homes. The cul-de-sac caught the eye of John Le Carré, who picked No. 9 as the home for his fictional MI6 intelligence officer, George Smiley – the BBC later used the house next door as Smiley’s home in the 1979 series Tinker Tailor Soldier Spy. Grab a coffee from Paul on the corner and stroll along this visual treat.
Open In Google Maps
London, United Kingdom
Give us feedback

Building
Facebook
Email
Twitter
Pinterest
Copy link
Share
Map View
This mews makes for a tranquil getaway from the London hubbub. The cobbled backstreet – accessible through the small archways at Launceston Place or Gloucester Road – narrowly escaped bombing during World War II, when much of the surrounding area had to be rebuilt. Amble between the multi-coloured homes, many of which are draped in wisteria and flowers. It’s a mini jungle in the big city.
Open In Google Maps
London, United Kingdom
Give us feedback

Building
Facebook
Email
Twitter
Pinterest
Copy link
Share
Map View
Willow trees hang over this narrow Victorian street tucked away in north London. Keep an eye out for the quaint, lipstick red post box in the wall on the corner and the black-tiled street names. Hampstead Heath, with its picturesque Hill Garden and Pegola, is a 10-minute walk away, and those who are thirsty should head to nearby 18th-century Hampstead Lounge and Jazz Club for a pint and some live music.
Open In Google Maps
London, United Kingdom
Give us feedback

Down the road from Elm Row is this slim Victorian pathway, which is so far off the beaten track it’s not even on Google Maps. The clandestine passageway, decorated with crooked flagstones and abundant shrubbery, runs between red-brick houses. 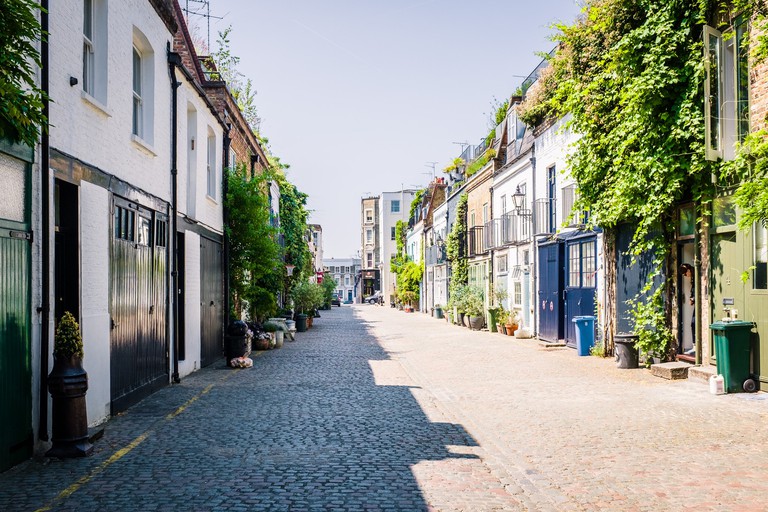 St Luke's Mews | © David Sargent Media/courtesy of Everchanging Mews
Love Actually fans should head straight to St Luke’s Mews: No. 27 (the pink one) was used as the setting for the infamous scene where Mark proclaims his love for Juliet using cue cards. And, although parts of this mews had to rebuilt after they were destroyed during the Blitz, this alleyway remains one of the prettiest in the capital. The buildings were originally used as stables for the houses on Lancaster Road and Westbourne Park, but most have since been converted into flats. Still, some authentic features of the mews have been retained, including a number of the stable doors.
Open In Google Maps
15 Saint Lukes Mews, Notting Hill, London, England, W11 1DF, United Kingdom
Give us feedback

Building
Facebook
Email
Twitter
Pinterest
Copy link
Share
Map View
This pedestrianised walkway is lined with 16 two and three-storey homes, each characterised by their mansard and parapet-style roofs. Originally used as stables for the properties in nearby Bina Gardens and Old Brompton Road, these homes now feature modern additions like colourful painted doors and continuous balconies.
Open In Google Maps
London, United Kingdom
Give us feedback

This west London road – famed for its bustling antiques market and use in the 1999 classic Notting Hill – is adorned with brightly painted Victorian homes. Watch out for No.22, George Orwell’s first London home after he left his job with the Indian Imperial Police in Burma, and be sure to leave time for a trip to the Grade II listed Electric Cinema, one of Britain’s oldest cinemas. Also worth checking out is the almost equally as charming Lancaster Road, which intersects this street. 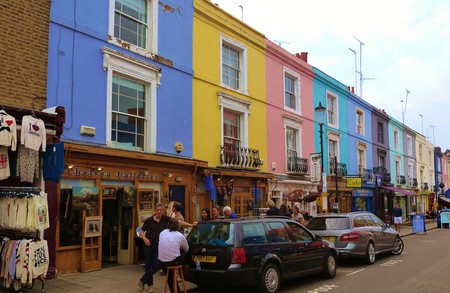 Zoo
Facebook
Email
Twitter
Pinterest
Copy link
Share
Map View
Colourful Grade II listed townhouses – an array of pinks, blues, creams and purples – enclose a splendid garden at the centre of this peaceful getaway. These buildings have been home to a number of famous individual overs the years, including the writers Ted Hughes and Sylvia Plath, who lived here in the 1960s. The square also has a few independent shops and is near Primrose Hill, which boasts panoramic views of the capital, as well as London Zoo.
Open In Google Maps
London, United Kingdom
Give us feedback

Church
Facebook
Email
Twitter
Pinterest
Copy link
Share
Map View
The Boltons is renowned for its vast Victorian villas designed by George Godwin, which are among the most expensive in the UK. The street is split into two crescents, allowing visitors to peak into the private garden in the middle, which contains a Grade II listed church also designed by Godwin. Oh, how the other half live…
Open In Google Maps
London, United Kingdom
Give us feedback
Give us feedback