The Most Stunning Celtic Artworks

Today, ‘Celtic’ means many different things to many different people: a football club; a style of traditional music; a group of languages; the ‘modern Celtic’ nations of Ireland, Scotland, Wales, Cornwall, the Isle of Man, and Brittany; and the mythology and legends of the British Isles. But, in the most traditional sense, who were the Celts?

The Celts were an Indo-European people who spread across mainland Europe as far west as the British Isles and as far southeast as Galatia (in Asia Minor) during the period before the Roman Empire. The name ‘Celt’ (Keltoi) is a homogenised one, used by the Classical writers of Greece and Rome to refer to their barbarian neighbours. While Celtic groups across Europe have some similarities – namely languages – they were a complex, multicultural, and diverse group of people. Even today, when we use the term ‘Celtic,’ it’s often in reference to the cultural groups of the British Isles and Ireland, ignoring their European counterparts.

One of the great legacies of the Celts is their art. Beautiful, elaborate, and intricate, woven within these abstract swirls are indicators of who the Celts really were and how they lived. Also known by scholars as La Tène art – a designation inspired by a site in Switzerland where many objects of this style were found in the 19th century – Celtic art dates from 500 BC to 100 AD (and the period continues to 1000 AD on the Western fringes of Europe, such as Ireland and Scotland).

Dedicated to unfolding the hidden meanings in this rich artwork is Celts: Art and Identity, a major exhibition organised in partnership by the British Museum and the National Museum of Scotland. In anticipation of this event, read here about five of the most exquisite Celtic art pieces from across Europe.

Found in the River Thames at Battersea Bridge, this ornate shield has become an iconic image of Celtic art. Owing to its thinness, excellent condition, and beautiful decoration, many scholars argue that this shield was ceremonial rather than created for battle. There has been much debate about why it was found in the Thames, with some suggesting that it was a ritual offering, possibly for the god of the river. This corresponds with the discovery at La Tène in Switzerland where swords, shield bosses, lance heads, brooches, various chariot pieces, and human and animal bones were found.

These findings suggest another ritual type activity took place here, involving human and animal sacrifice, and the offering of weaponry. The high quality and beautiful design of Celtic weaponry reveals the warrior culture these people lived in; war influenced ritual and religion, and warriors were held to high esteem. Celtic art often includes images of animals either in reference to the power of the natural world or an associated deity. This shield is embossed with abstract swirls and stylised bull or cow heads with bulbous horns. Perhaps the owner hoped that the ferocious anger of a bull or cow would spur him on in battle.

The Battersea Shield can be found in the British Museum’s Celts: Art and Identity exhibition.

Often, thoughts of Celtic cultures are of brutal, war-like peoples. These thoughts are informed by Classical attitudes, who saw their barbarian neighbours (here, ‘barbarian’ takes on the ancient meaning and refers to ‘non-Romans’ or ‘non-Greeks’) as bloodthirsty and base. In fact, Celtic tribes were highly sophisticated – trading, travelling, communicating, creating and preserving their rich, oral culture. This mirror – one of the highest examples of La Tène or Celtic art made in Britain – proves this. The back depicts intricate swirling decoration which, when studied, has been found to depict a face. Only 30 bronze mirrors like this one have been found in Britain, and they appear to be singularly British-made; the others were found to have been traded across Europe.

The Desborough Mirror can be found in the British Museum’s Celts: Art and Identity exhibition. 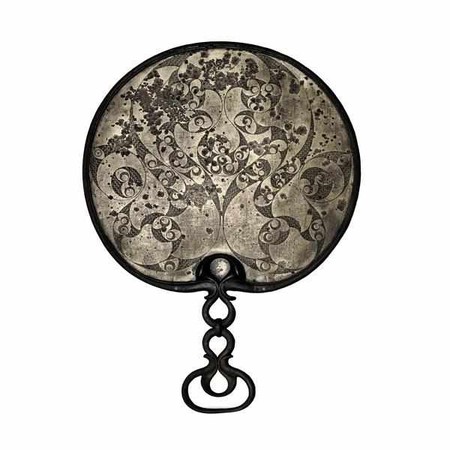 The Desborough Mirror | © The Trustees of the British Museum

The Gundestrup Cauldron: 1st century BC

Found in a peat bog in Denmark in 1891, the Gundestrup Cauldron is a religious vessel. It is believed that it was placed in the bog as a religious offering. As the largest surviving piece of Iron Age silver work, the cauldron has garnered a lot of scholarly interest, not simply because of its high quality of craftsmanship, but also because of its disparity of style; Thracian in workmanship, but Celtic in imagery. The panels depict different images, from a woman wielding a sword on the central panel to woodland creatures and mythic beasts such as stags and dragons encircling the rest of the plates. Other images include zoomorphic deities from Celtic mythology, including a horned figure believed to be Cernunnos, a woodland god.

Exotic images of elephants and griffins are derived from the cauldron’s Thracian influence and the images circulated on Roman coins. These diverse cultural influences reflect the trade relations that united Celtic tribes across Europe and the tribes’ relationship with the Roman Empire.

The cauldron can be found at the National Museum of Denmark. 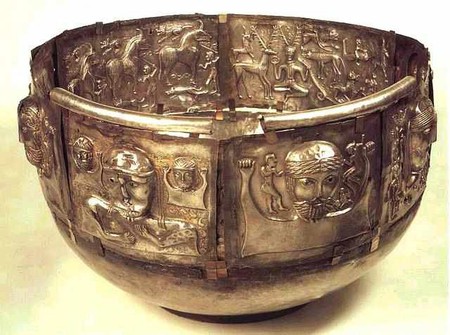 The statue of Tarasque de Noves: 50 BC – 1st century AD

The statue of Tarasque de Noves is attributed to a Gallic tribe, the Cavares, who were located in the lower Rhône valley. Sphinx-like, with the head of a lion or wolf, reptilian qualities, and the body of a human, the beast rests on two La Tène-style heads, while a dismembered arm hangs from its snarling jaws. Some scholars have suggested that the fearsome beast acts as a tribute to local or tribal gods, while others propose that it celebrates the fierce, warrior culture of the Cavares. Similarities with other sculptures of lion-anthropophagi discovered in Provence have suggested that this object could be associated with Gallic Celtic funerary cults. These findings suggest that the beast represents death, ‘swallowing’ up the body before it enters a new world.

The statue can be found at the Musée Lapidaire. 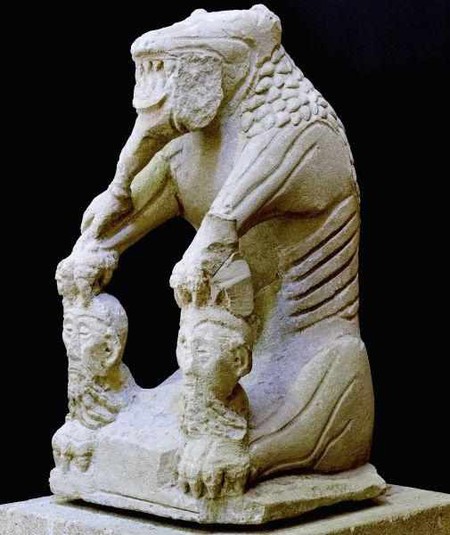 The statue of Tarasque de Noves | © the Musée Lapidaire

Found in Northern Burgundy, the Vix Burial is arguably one of the grandest Celtic monumental burials found. The burial of a high status lady (‘Lady Vix,’ as she is now known), it gave historians great insight into the high status possible of Celtic women. Lady Vix’s exact status is still debated – whether she was a Celtic princess or a Druidess in service of a King or Queen – but it is clear from the opulent pieces that she accumulated great wealth and respect. One such object is the Vix Torc, a pure gold band that is decorated with delicate filigree and small flying horses. In Classical depictions of Celts, Torcs feature most often. Bands of metal that encircle the wearer’s neck, Torcs became an easy and identifiable way to signal if someone was Celtic. Differences in design and metal signified the wearer’s tribal or regional identity, class, and status.

The Vix Torc, and the rest of the Vix treasure, can be found at the Musée du Pays Châtillonnais.

Celts: Art and Identity will be at the British Museum until the 31 January 2016.