The Most Exclusive Private Members’ Clubs in Central London

The Most Exclusive Private Members’ Clubs in Central London

Staircase and hallway | © The House of St Barnabas
London has long been a magnet for the rich and famous. A-list celebrities, youthful royals and wealthy magnates alike are drawn to the UK’s affluent capital; London is a playground for anyone who can afford its opulent luxuries. The city is home to a plethora of private members’ clubs that provide the global elite with plenty of inspirational venues to work, dine, network and, of course, relax. Here are a few of the best that Central London has to offer.

Building, Park
Soho House, Dean Street | © Soho House
The original seed from which an international luxury leisure group has flourished, Soho House is appropriately situated in the heart of Soho, on Dean Street. Four membership options are available depending on age and whether or not prospective members want access to all of the company’s ‘Houses’ around the globe or just their local one. Membership applications need to be supported by two members of the club. The Soho House group also counts Little House in Mayfair and The Ned in Bank among its London private members’ clubs.
More Info
Open In Google Maps
76 Dean Street, West End, London, England, W1D 3SQ, United Kingdom
+442030060076
View menu
Visit website
Visit Facebook page
Send an Email
Give us feedback

The House of St Barnabas

Building
Exterior | © The House of St Barnabas
Uniquely serving as both a private members’ club and a homeless charity, The House of St Barnabas sits on the corner where Soho Square meets Greek Street. Boasting a rococo decorative scheme dating from 1754, the Grade I-listed building has previously served as a private residence, a base of operations for local authorities and a house of charity. It was during this phase that the Chapel of St Barnabas, which would later lend its name to the house, was built. Eventually, financial circumstances demanded that the building adapt its approach to social enterprise and the not-for-profit private members’ club was born, complete with its integrated ‘Employment Academy’, which strives to help homeless people back into work.
More Info
Open In Google Maps
1 Greek Street, West End, London, England, W1D 4NQ, United Kingdom
+442074371894
View menu
Visit website
Visit Facebook page
Send an Email
Give us feedback

Restaurant, Nightclub, European
Opened in 2017 and dwelling in the depths of Mayfair, Chesterfield Street’s Chess Club offers members a lavishly fresh environment to enjoy food from the Jackson Boxer restaurant, with food available all day. There is a £200 joining fee for all memberships except the under 30 membership, while membership fees can be paid monthly or annually and vary from £25 to £45 per month, or £250 to £450 per year depending on the membership type.
Permanently closed
More Info
Open In Google Maps
1a Chesterfield Street, Mayfair, London, England, W1J 5JF, United Kingdom
+442074956171
View menu
Visit website
Visit Facebook page
Send an Email
Give us feedback

Located just across the road from Soho House, Quo Vadis is another opulent haunt on Dean Street. Formerly a brothel and a home to Karl Marx, the club has a joining fee of £150 and the five available membership options can be paid annually or monthly, while an alternative life membership option exists for a one-time fee of £5,000. Endorsements from two members of the club are needed for a membership application to be considered. 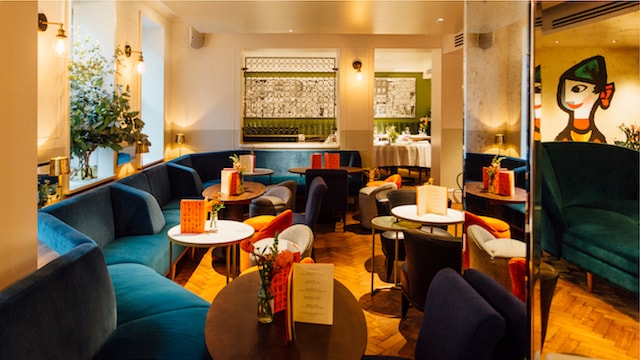 Nightclub, European, $$$
Originally opened over half a century ago, Annabel’s relocated to its new Grade-I listed Georgian home on Berkeley Square in 2017. Open all day and all night, Annabel’s 26,000 square feet offers a work space, bars, restaurants, private dining rooms and a cigar salon. In addition, it’s home to a glass-roofed terrace garden, which connects to the spa, and a basement nightclub. Joining fees range from £250 to £1,250, and annual membership subs are anywhere between £750 and £4,000, depending on prospective members’ age and whether they opt to join with somebody else.
More Info
Open In Google Maps
46 Berkeley Square, Mayfair, London, England, W1J 5AT, United Kingdom
+442039154046
View menu
Visit website
Visit Facebook page
Send an Email
Give us feedback

Library
St Martin's Lane Library, St Martin's Ln | © Library
Lying just behind the National Gallery, Trafalgar Square and the National Portrait Gallery, Library offers members an abyss in one of London’s finer cultural hubs. True to its name, the club is full of books, in addition to food, drinks, overnight rooms and a stimulating selection of programmes. Membership plans range from a single daypass, increasing incrementally up to an annual membership and payments can be made monthly or in a single installment.
More Info
Open In Google Maps
112 Upper St Martin's Lane, Charing Cross, London, England, WC2H 9DL, United Kingdom
+442033027912
View menu
Visit website
Visit Facebook page
Send an Email
Give us feedback

Boasting two clubs in prosperous areas of London, Eight offers the same membership deals for both its Bank and Moorgate establishments. New members must pay a £75 joining fee, in addition the £900 plus VAT annual individual rate – prices improve for corporate membership depending on how many people join at the same time. Eight Bank offers pool tables, meeting rooms, a cinema and a lounge bar; Eight Moorgate boasts a library, a restaurant, a conference space, a lounge bar and terraces with views over the city.

Bar, Restaurant, American, European, $$$
Housed in a former Presbyterian church that is itself nestled away in the byways of Belgravia, Mosimann’s offers a refined dining environment to its international clientele. Members can dine in the main dining room, or any of seven splendid private dining rooms, before stepping out to the balcony bar for a beverage. Membership options start with an annual lunch-only membership for £200, and then range from a £300 annual membership for anyone under the age of 35, up to a £700 full annual membership with a £250 joining fee. A £10,000 lifetime membership is also available, as are special corporate memberships. Want to discover more private members’ clubs in the UK capital? Check out what East London has to offer or discover the recent additions.
More Info
Open In Google Maps
11B West Halkin Street, Belgravia, London, England, SW1X 8JL, United Kingdom
+442072359625
View menu
Visit website
Visit Facebook page
Send an Email
Give us feedback
Give us feedback