‘The Londons’ by David Hayden 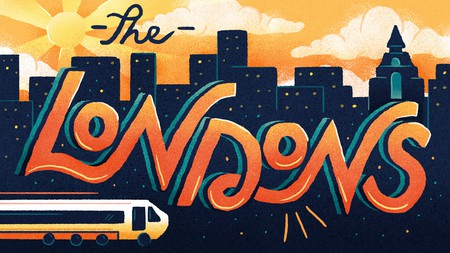 Hera had held out her arms to the waves and called for her mother. The beach at Winterton had been empty of people but full with the sound of the up-rising sea. In the café, afterwards, a man from Hackney gave her a hot strong cup of tea and a fried egg sandwich. It was noisy in the quiet coach on the way back.

The distance between each traveller on the platform at Liverpool Street station was various and changing. Everyone moved at different speeds. Hundreds stood waiting on the concourse searching the overhead display for the names of their homes and other places. Hera passed through without touching anyone. On the steps outside one man rapped about how angry god was right now, while another listed everything white that was poison.

Hera’s friend, Anj, had left London for good, for bad, and on her last night she sat down on Streatham High Street in her ruined dress, her torn tights, and told Hera to reach out once every day for something that isn’t there. As she approached, Hera checked the façade of Christ Church Spitalfields for wonders. There was nothing, as usual. Nothing except Anj’s moon face, her cracked voice, coming out of the past, louder than the city.

Hera stood staring at soap: at sandalwood, lavender, bergamot and Dudu-Osun. She thought of the playground at Sydenham Girls. There was a group of tough girls laughing and laughing for no good reason. Hera was there laughing too. She thought: “Had I been a tough girl?” For a moment she heard a voice, clear and sweet and wicked, saying: “You going to Lagos? You going? You going to Lagos.” And this was still, and would always be, the funniest thing that anyone had ever said. In the window she saw herself, older and unsmiling.

Hera’s mum had never worn kaftans. She arrived from Brisbane on a boat late in 1969. It must have been a ship but she always called it a boat. Her mum had done a secretarial course in Sydney and temped to save the fare. One way. Hera could see her carrying her cheap suitcase down the gangplank at the docks, with her neat little powder-blue hat, with a net pinned back, her A-line skirt and navy jacket, and her best shoes. She had taken a bus straight to a Brook Street Bureau and registered for work. An Australian girl in the queue heard her accent and that evening she had moved in to a crumbling house in North Kensington.

Hera stood outside the Brick Lane Bookshop, unable to remember how she had arrived there from the soap store. There was a book in the window, the cover a painting of a woman with her face painted over in harsh, thorough white strokes, and above, in pink capitals, the word: MOTHERS. She turned and took a side street and a cross street and kept on going at speed until she reached the tube. It would take an hour and thirteen minutes to reach arrivals at Terminal 3. If nothing went wrong. There was always something wrong in one of the Londons.

Hera’s dad had arrived by boat from Kingston one spring day in 1963. Hera felt sad that men no longer wore suits that way: well-fitted, the white shirts, the skinny dark ties, the always shiny shoes, the hat with the perfect tilt. Mum had seen him in her new local, walked right up and said: “Would you keep a girl waiting much longer for a drink?” He had leaned back smiling, in his way, and said: “What are you drinking, darling?” “Port and lemon…” “Do you think I’m made of money?” And they’d laughed and leaned into each other, and that was that.

Hera changed at Holborn. A birdlike man in a sunburst T-shirt got on with her. He pulled a gigantic eggshell-blue suitcase behind him into the door space, placed a hand on top, pushed down and, swinging his legs lightly into the air, vaulted up, where he sat smiling and whistling and holding on to the handrail. A couple wearing matching Totoro sneakers sat opposite, holding hands, sharing earbuds; between them, on the floor, a small green canvas backpack with a flight label that read ITM. Hera didn’t want to see any more.

A silver-haired woman in a navy suit and a black silk blouse looked over at Hera, pinched the bridge of her nose and reached down to touch her flight case, as if to make sure it was still there. The woman’s eyes were red. She looked over at Hera again. Hera returned her gaze and held on to the frozen sinking face for a moment too long, hoping to see another, before turning away.

Through the tube door, the barriers, along the walkways, the travelators, up the elevator and Hera stood in the terminal with and in the crowd squinting at the arrivals board. Flights were delayed, flights were on time – her dad’s from Norman Manley airport. She went to where everyone was expected to wait.

Hera felt something arrive with the scent of oranges. She pictured the fruit bowl on the sideboard that her mother kept full to overflowing in every season. Hera turned round and saw a woman kneeling on the floor, packing a suitcase with dozens of oranges. From a pocket she produced a single wine-dark pomegranate, which she placed carefully in the middle before closing the lid. The zest carried hunger, of many kinds, carried joy and loss and remembering through the air. A chauffeur took off his peaked cap, scratched his head and held up a piece of white board that read: Rosalie.

A hum rose behind the glass door, behind the barriers, and it shifted open. People pushed closer, tilting and craning, even though nothing was yet in their lines of sight. A curly-haired little girl ran out from the white light of the arrivals corridor, followed by a man lurching forward with a yellow lion backpack and a bulky overnight bag. A group of elderly women came through wearing identical hats and sensible overcoats. A man, a tall man, in smart brown slacks and a baby-blue jacket stepped forward leaning on a brass-topped walking stick. “Hera! Hera!” he called, and waved the stick.

He stepped back, his big hands around her shoulders. He looked into the heart of her and said: “And now, and still. And now… there’s time.”

This piece is part of Culture Trip’s original fiction project on the theme of arrivals and departures in London, New York City and Hong Kong.