The London Marathon in Numbers 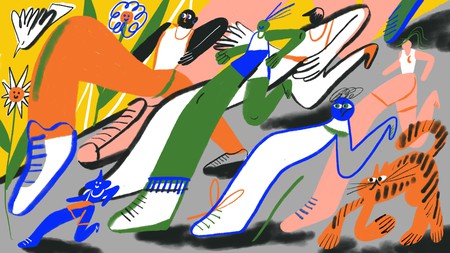 This is your comprehensive numerical guide to the London Marathon – the landmark years, record-breaking times and fascinating figures associated with one of the world’s most popular races.

The year of the Battle of Marathon, the historical event that inspired the race. Outnumbered by an invading Persian army, the Greeks sent their fastest runner, a soldier named Pheidippides, to Sparta to request backup. He ran the 150-mile (240-kilometer) distance in just two days, only to discover the Spartans were in the middle of a religious festival and unable to join the fight. Against the odds, the Greeks emerged victorious. Legend has it Pheidippides (who had rejoined his men on the battlefield after racing 150 miles back to Marathon) took off running once more, this time to Athens – a distance of 25 miles – to relay the news of their success. He burst through the doors of the Athenian assembly and proclaimed victory over the Persians, then immediately dropped dead from exhaustion.

The year of the first organised men’s marathon race, a component of the first modern Olympic Games held the same year in Athens, Greece. Organised by Pierre de Coubertin, the modern Games were a resurrection of their ancient Greek counterpart, in which athletes from all over Greece would travel to Olympia to compete in the quadrennial event.

The number of miles (42.165 kilometers) in the London Marathon – a distance that re-creates Pheidippides’s journey from Marathon to Athens, plus an additional 1.2 miles. In the 1908 London Olympics the finish line of the marathon was extended in order for the race to end below the White City Olympic Stadium’s royal box, and after 1921 this became the official distance of a marathon worldwide.

The fastest London Marathon completion time to date. The winner, Stanley Biwott of Kenya, set the record in 2016 with an impressive pace of four minutes and 43.4 seconds per mile. To put this in perspective, the average pace is nine minutes and 59 seconds per mile for men and 10 minutes and 58 seconds for women.

The year of the first London Marathon. While roughly 20,000 people applied to take part, event restrictions dictated that only 7,747 were permitted to run. Leading the 6,255 runners who crossed the finish line on Constitution Hill were Dick Beardsley (American) and Inge Simonsen (Norwegian), who tied in the men’s event, and Britain’s Joyce Smith, who won the women’s event. A year later, the participant limit was increased, and 18,059 of the 90,000 who applied were able to enter the race.

The number of “Ever Presents” – people who have participated in every London Marathon since its inception in 1981. The oldest of these individuals is Kenneth Jones, who will be 85 when he runs his 39th consecutive marathon in 2019.

The year London Marathon participants broke the £1 billion fundraising mark. Every year since 2007 the Marathon has set a new world record for the largest amount of money raised for an annual event, and in 2019 that number reached £1 billion (approximately $1.3 billion).

The record number of runners who completed the London Marathon in 2019. Runners were led by Kenyan Eliud Kipchoge, who stormed to the finish line of his fourth London Marathon win in an impressively fast 2:02:38.