The Jameel Prize: Islamic Tradition And Modernity In Art And Design At The V&A 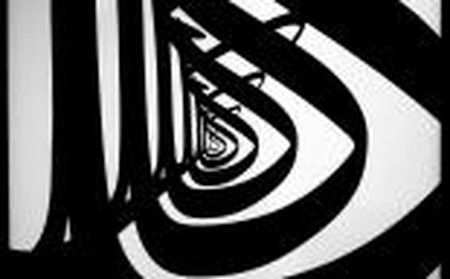 The Jameel Prize aims to explore the relationship between traditional and contemporary Islamic art, craft and design, investigating and highlighting Islamic culture. Spanning across fashion, design, typography and sculpture, the ten artists and designers shortlisted for the prize all interpret Islamic Art in their own distinctive ways. Their work will be on display at London’s V&A from 11 December 2013 – 21 April 2014. 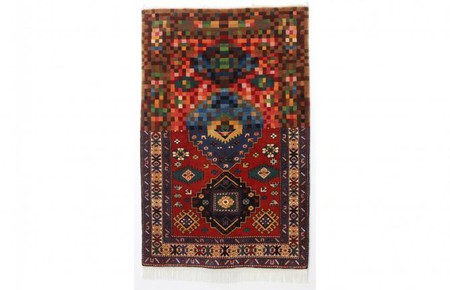 Faig Ahmed is an Azerbaijani contemporary artist whose work focuses on traditional Azerbaijani carpets, manipulating their structures and boundaries by transforming their two dimensional designs into three dimensional spaces. Through this, his work aims to connect this age old art with modern life and contemporary artistic movements. His repertoire of artwork also includes paint, video and installation. Ahmed has exhibited all around the world including in his home city of Baku, as well as Sharjah, London, Berlin, Paris and Venice. 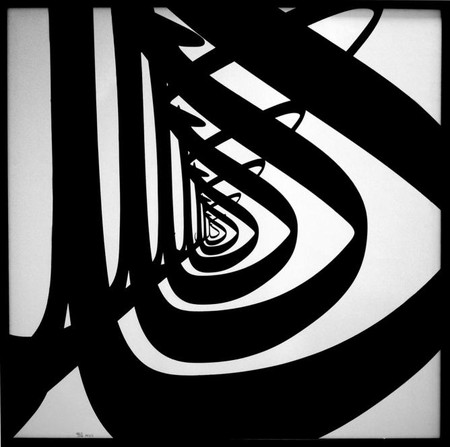 Nasser Al Salem’s practice fuses Arabic calligraphy with contemporary art, using both word semantics and visual forms to communicate meaning. His work is renowned for incorporating mixed media and hand drawn ink and creates fascinating relationships with striking conceptual potential. His work has won many awards and has been presented in prestigious venues around the world, including the British Museum in London, Saudi Calligraphers Guild in Jeddah and Edge of Arabia in Istanbul. 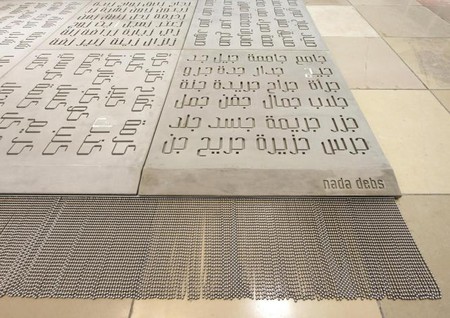 Raised in Japan, taught in the US, established in London and now based in Beirut, Nada Debs is a Lebanese furniture and product designer whose artistic work reflects her multiple cultural influences. Her practice has been described as using ‘Far East minimalism with contrasting warm patterns typical of Arabesque design’, and explores contemporary aesthetics through Eastern craftsmanship while maintaining elements of Arab heritage and tradition. Her company East and East is represented in Beirut, New York, Dubai and Geneva. 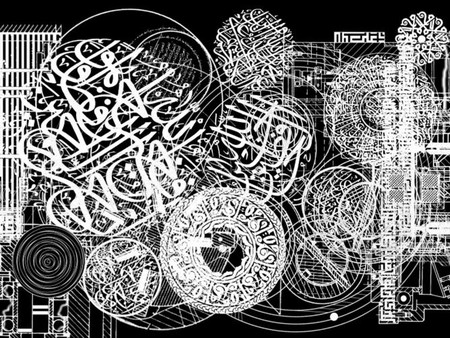 Mounir Fatmi, Modern Times: A History of the Machine (Detail), Video, 2010–12 | Courtesy of the artist and Shoshana Wayne Gallery, Photo by Mounir Fatmi

Mounir Fatmi is an award winning artist whose work has featured in several international art biennials such as Venice, Lyon and Sharjah, as well as being exhibited in many esteemed galleries and museums around the globe. Fatmi’s craft extends across a diverse plane of mediums including drawing, painting, video, installation and sculpture, and often incorporates Arabic calligraphy, arranging these characters into wheels that conjure notions of locomotion. His work is renowned for commenting on current events and scrutinising notions of religion, ideologies and the dystopian nature of the man-made world. 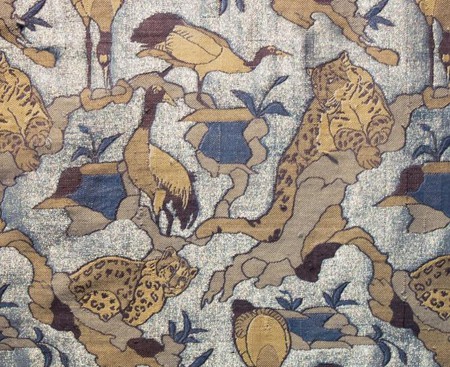 Both a textile designer and historian, Rahul Jain’s work utilises historic techniques to recreate textiles such as Mughal silks of the 17th and 18th centuries. Jain’s practice investigates historical Indian, Iranian, and Turkish fabrics, and is informed by his extensive writings on historical and contemporary design. Jain runs a workshop of traditional Indian drawlooms in Varanasi called ASHA, and the items made here are held in some of the world’s most esteemed collections, such as The Art Institute of Chicago, The British Museum in London, Musee des Arts Asiatiques-Guimet in Paris, and The Textile Museum in Washington DC. 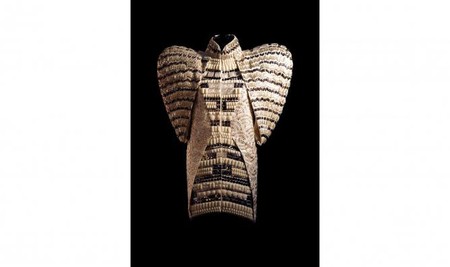 Dice Kayek is the name of a fashion label created by sisters Ece and Ayse Ege, and was established in Paris in 1992. Now living and working between Istanbul and Paris, the Ege sisters’ label gained critical acclaim after their launch portfolio that involved unique takes on the conventional white shirt. Since these earlier days Dice Kayek has focused on Turkey’s architectural and artistic heritage, using visual cues such as the robes of former Ottoman rulers and domes of Istanbul’s mosques and palaces as inspiration. Dice Kayek has been awarded multiple awards for both the cultural and design excellence of their works, and their design collections have been exported to five continents around the world. 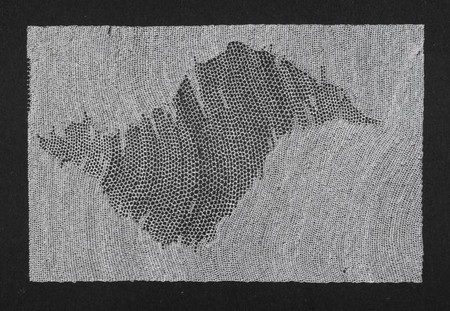 Widely exhibited around the world, Waqas Khan’s art centres on precision and minute detail, focusing on fine printmaking and pointillism. His practice is informed by his training in miniature painting and his drawings are often made with a technical pen used on handmade paper. His intricate work has been compared to buildings, ‘constructed brick by brick’, and is thought to reflects aspects of Sufi mysticism. Ritualistic in his approach, Khan uses a magnifying glass when drawing, usually working at night, and holds his breath while working to guarantee perfection. 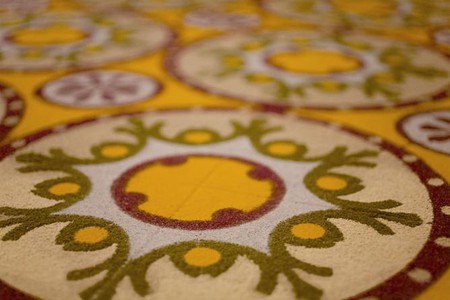 Laurent Mareschal is both an artist and short filmmaker, and his work often revolves around notions of incommunicability while encouraging audience interaction. Obstacles and problems in translation, mediation and intervention are recurring themes, while Hebrew and Arabic act as pools of inspiration for his practice. Some of his structural works have involved large, site specific pieces made from everyday items that are arranged to evoke the imagery of traditional embroidery. While Mareschal lives and works in France, he spent many years in Israel and has had work exhibited in iconic setting such as the Carroussel du Louvre (Paris), the Grand Palais (Paris), and the Ashdod Art Museum (Israel). 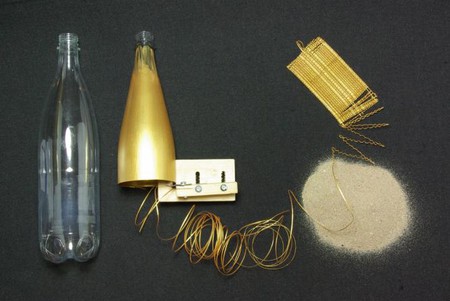 Florie Salnot, The tools used for the series Plastic Gold | Courtesy of the designer

Florie Salnot is a designer whose work is enriched by a background in social sciences, with the motivation behind it described as ‘to improve people’s lives, to strengthen individual and cultural confidence and to enable independent living.’ Her practice focuses on how design can solve everyday problems, as seen in her Plastic Gold project. Inspired by traditional Western Sahara jewellery, Salnot has developed a technique that only uses hot sand, simple tools and spray paint to transform discarded plastic bottles into necklaces and bracelets. Living and working between Hamburg, London and Paris, Salnot’s work has inspired people across the globe. 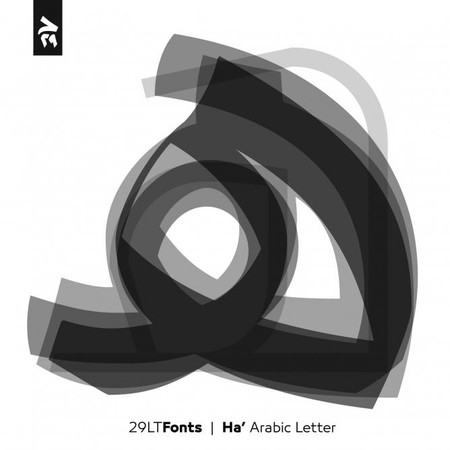 Arabic typography lies at the heart of designer Pascal Zoghbi’s work, and his dedication to this practice is truly inspiring. Zoghbi is the founder of 29letters, an Arabic design and typography firm in Beirut which has been working to expand the minimal Arabic print options available. Working with newspapers, magazines, architecture, wayfinding and software, Zoghbi’s work has focused on respecting the traditions of Arabic script while also satisfying contemporary needs and aesthetics. He is also the co-author and editor of Arabic Graffiti (From Here To Fame, Berlin, 2011), and teaches typography at Notre Dame University, Beirut.