The History Of Tower Bridge In 1 Minute

Tower Bridge was built 120 years ago to ease road traffic whilst still maintaining river access to the busy Pool of London docks. With its giant moveable roadways that lift up for passing ships, the bridge is an iconic symbol of London and arguably one of the most famous and instantly recognisable structures in the entire world.

The increased commercial development in the East End of London led to the requirement for a new river crossing downstream of London Bridge and with that, the city needed a bridge to cross the river. As a traditional bridge was not possible, cutting off access to sailing ships, a Special Bridge or Subway Committee was formed in 1877 to find a solution for the river crossing problem. They opened the design to public competition and in 1884 the design by Horace Jones, in collaboration with his engineer John Wolfe Barry, was approved. They had developed the idea of a bascule bridge with two bridge towers built on piers and a central span split into two bascules, which could be raised to allow river traffic to pass. 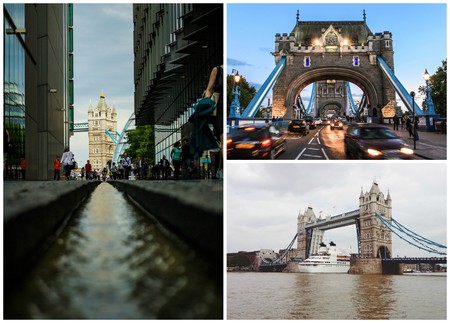 The construction work started in 1887 and took eight years, five major contractors and the work of 432 employees to be finished. Two massive piers, containing over 70,000 tonnes of concrete, were sunk into the riverbed to support the construction. Over 11,000 tonnes of steel provided the framework for the towers and the walkways, clad in Cornish granite and portland stone for protection and to give a pleasant appearance. When Jones died in 1886, George D. Stevenson took over the project and replaced the original brick facade with the more ornate Victorian Gothic Style, intending to harmonise with the nearby Tower of London. The total cost of Tower Bridge was £1,184,000 and it was officially opened on the 30th June 1894 by the Prince of Wales.

In 1974, the original operating mechanism was largely replaced by a new electro-hydraulic drive system, and in 2008 a facelift for the bridge was announced costing £4 million and taking four years to complete. The work entailed repainting and the installation of a new lightening system in the walkways. For the 2012 Summer Olympics held in London, the bridge featured in publicity and a set of Olympic rings were suspended from it to mark one month until the start of the games.

Today Tower Bridge is an undoubted landmark and a popular destination for visitors from around the world.

📅 The bridge lifts at various times throughout the year.