A History of The Tate Modern in 60 Seconds

An immense, iconic building standing tall on London’s skyline, the magnificent Tate Modern gallery showcases the best of national and international modern art. One of the four major Tate sites, the modern gallery is based on Bankside facing St. Paul’s Cathedral and the City of London.

The building was formerly the Bankside Power Station in the borough of Southwark, designed by the architect Sir Giles Gilbert Scott, who also planned the Battersea Power Station. Building began in 1947, and the Power Station closed in 1981. It wasn’t until 1992, when the Tate Gallery opened a competition to design a new building for modern art, when Herzog and de Meuron won with their proposal of reinventing the Bankside Power Station, rather than it being demolished. The great Turbine Hall, which previously held the electricity generators of the power station, was transformed into a vast social space. At five storeys high, it provides a large area for specially commissioned installations. Alongside the Turbine Hall was the Boiler House, which subsequently became the galleries that are seen in the building today. The 4.2 million bricks used on the façade of the building and the gigantic tower formulate the Tate Modern as a prominent and distinguishable design. 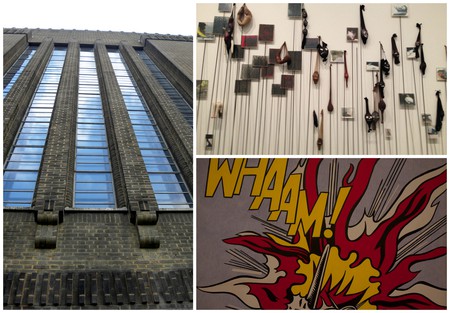 The gallery attracts an astonishing five million visitors per year, and is renowned as one of the largest collections of modern and contemporary art from around the globe. It showcases art from 1900 to the present day, with countless famous names such as Warhol, Lichtenstein, Bonnard, Matisse, Picasso, and Rothko.

The galleries here are grouped by artistic movement, spanning over five of the seven available floors. Other facilities at the Tate Modern include a performance area, education areas, an auditorium, several shops, a café, restaurant, community garden and a room for members, alongside easy access to the Tate Britain.