The History Of The St. Pancras Renaissance Hotel In 1 Minute 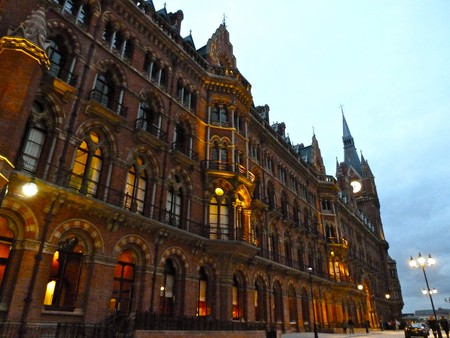 The story of the St. Pancras Renaissance Hotel began in the 1860s, when rail travel was a booming industry and people were streaming into London by the carriage-full. The Midland railway service decided it needed its own station to support the influx of trade from Yorkshire and the East Midlands — and with it a grand hotel.

George Gilbert Scott was chosen as the architect of this huge project. He was a man with great vision who had taken inspiration from his travels in Europe. In keeping with the gothic nature of the Houses of Parliament, Scott designed a building that would reflect a Venetian gothic style and become a spectacle in London, at the high price of around £500 million by today’s standards. Scott made use of red brick as its production was making the midlands wealthy and it seemed only fitting to represent this using their London landmark.

Despite the cost, the building was completed in 1873 and the then ‘Midland Grand Hotel’ was one of the most lavish places in London, stealing the attention of socialites and wealthy business men who could afford the high price of 3.5 shillings for a night’s stay. The décor was incredibly ornate and intricate, boasting reds and golds with no detail left unattended. A grand double staircase ran up the three-storey building, culminating in a vaulted ceiling. The hotel also had a working hydro-lift, the first revolving door and flushing toilets – unheard of in public establishments during this time. 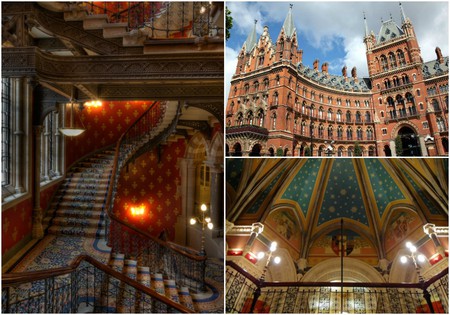 However, this success did not last, despite the hotel’s original innovation. As time moved on, the anti-fire precautions, which consisted of 22-inch thick concrete blocks that had once seemed so sensible after the great fire, were now problematic. As other hotels modernised and fitted en-suite bathrooms, the Midland Grand’s firm structure prevented crucial updates that caused the hotel to fall from favour and become derelict. It became the patron of film and television crews searching for a lost time of glamour and grandeur.

It was the lasting beauty of the hotel that prevented its urged destruction and encouraged the decision for it to become a Grade 1 listed building in 1967. However, it wasn’t until 2002 that its full potential was realised and renovations began to reopen the wonderful hotel as the St. Pancras Renaissance.