The History Of The Southbank Centre In 1 Minute

Located along the south bank of the Thames, the Southbank Centre in London is a complex of artistic venues, offering a wide range of cultural events and exhibitions. Throughout the year, a variety of events including dance, music, art performance and spoken word, take part at the art centre for the public to enjoy.

The history of the Southbank Centre, which today includes the Royal Festival Hall, the Queen Elizabeth Hall, the Purcell Room, the Hayward Gallery and the Poetry Library, started with the Festival of Britain in 1951. Aiming to demonstrate Britain’s recovery after World War II by showcasing its best science, technology, arts and industrial design, the London County Council decided to build a new concert hall – the Royal Festival Hall. The RFA opened on the 3rd of May 1951 with 2,900 seats, was then extended towards the river and Waterloo, and then refurbished from 1962 to 1965. After the London County Council decided to build a second concert hall and an art gallery, the Queen Elizabeth Hall and the Purcell Room were opened in 1967. The three together were known as the South Bank Concert Halls. 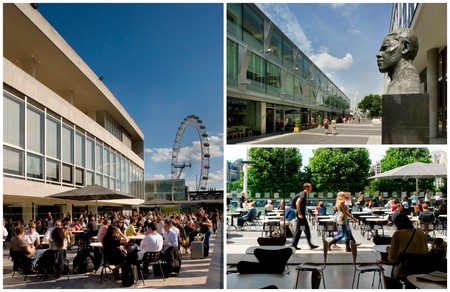 In 1968, the Hayward Gallery opened with its first exhibition, a major retrospective of the paintings of Henri Matisse. When the Greater London Council introduced the radical ‘open foyer’ policy in 1983, the foyers of the Royal Festival Hall were opened to the public all day, seven days a week, with free exhibitions, lunchtime concerts, evening jazz performances, shops, bars and buffets. With the abolition of the GLC in 1986, the Arts Council took over responsibility for the South Bank Centre and began setting up a South Bank Board, to control the concert halls.

The following years, the Waterloo side was the subject of various plans for modification and reconstruction, which did not proceed due to the high costs. In 2000, a plan for the Southbank Centre side was produced, including a new administration building for the members of staff, the creation of three new public spaces around the Royal Festival Hall, and the modification of the Queen Elizabeth Hall undercroft.

Today, nearly a thousand paid performances of music, dance and literature are staged at the Southbank Centre each year, featuring 300 free foyer events and three to six major art exhibitions.