The History Of Harrods In 1 Minute

Covering one million square feet of retail space, both senior and junior Harrod laid the foundations for what is now known as the world’s largest and most famous department store. The motto held at Harrods, Omnia Omnibus Ubique – meaning ‘All Things for All People, Everywhere’ – is as relevant today as it was in its humble beginnings.

Charles Henry Harrod started as a tea-dealer in Whitechapel, in 1834, before relocating his small, one room, tea and grocery store to Knightsbridge in 1849, hiring two assistants and one messenger boy. Throughout the years, the store expanded steadily, and in 1861, he sold his shop to his son Charles Digby Harrod, who expanded the store to attract the new wealthier clientele appearing in Knightsbridge. By 1873, the name ‘Harrod’s Store’ appeared out front, and by 1883, the store had grown to six departments across five floors, with over 200 assistants selling everything from perfumes to clothing.

However, on 7 December 1883, the store was destroyed by a fire, and Harrod, very fast, relocated temporarily in the nearby Humphrey’s Hall; and with the help of the architect Charles William Stephens, the Harrods store we see today was first built, opening in September 1884. Known for its grandeur, the store became a limited company before Harrod retired in 1889. 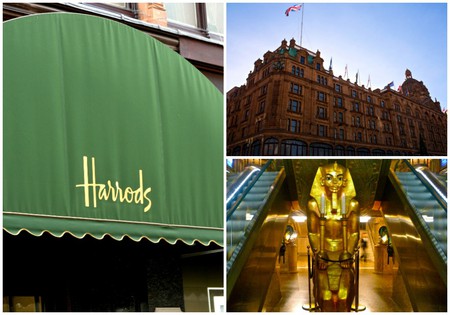 After sold to public ownership, the store continued to fascinate many customers under the iconic name, with one of the world’s first escalators appearing in Harrods in 1898, alongside a department that was dedicated to selling exotic pets (although removed in the 1970s). During World War II, Harrods sold goods to help those in the war by making parachutes, uniforms and the necessary parts for Lancaster bombers.

In 1959, the High Street department store group House of Fraser bought Harrods. However, by 1985, the store returned to private ownership by Egyptian-born owner Al Fayed, who, in 1989, introduced a dress code that banned customers wearing beach or cycling shorts and flip flops – and further added his own personal touch in 2000, the Egyptian Room. It was also during this time that he did not renew the royal warrants on the store after stating that neither the Queen nor Prince Charles had shopped in Harrods in several years and that continuing to display the Royal Crescent would be ‘totally misleading and hypocritical’.

This action clearly did not have any effect on the loyalty of the customers, as today, the Harrods empire employs about 4,000 staff members and is the leader in luxury retail with customers travelling from across the world!