The Gallery Of Everything Opens New London Space 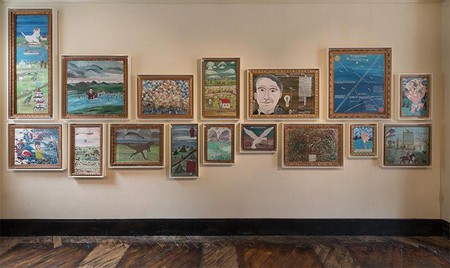 Courtesy of Gallery of Everything

The Museum of Everything have just opened their first commercial gallery in a former barber’s shop on Chiltern Street, London. Known for curating exquisite and curious exhibitions of artists from non-academic backgrounds, founder James Brett tells us about The Gallery of Everything’s first show made in collaboration with musician Jarvis Cocker, having celebrity-haunt Chiltern Firehouse as a neighbour, and reevaluating the term ‘Outsider Art.’

Why did you want to take a different approach to The Museum of Everything and open a gallery space?

We’ve often talked about having something permanent in London, but to do The Museum of Everything would be too much. We just did a show in Holland and although it was great, it was a monster with 2,000 works. So when the barber’s shop on Chiltern Street closed down, we thought it would be really great to do a gallery there. I used to know the the barber, Mario, who sadly died; my uncle used to get his hair cut there. It’s also got the same colours as The Museum of Everything – that’s the way my mind works, so it seemed like a really good fit. It was a very simple logical step – it had nothing to do with a strategy, which one would normally do in the art world. 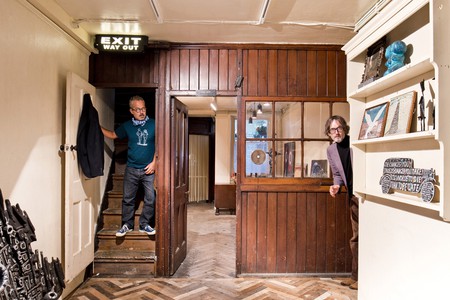 The location is also very The Museum of Everything, as Chiltern Street still feels very independent.

You’re absolutely right, and that’s something that appealed to me. I didn’t want to see a big brand steam in there and take over this little shop. Chiltern Street is a funny street – it’s a slightly odd ball street. The fact that the gallery is opposite the Chiltern Firehouse seems very amusing to me because the artwork we show wouldn’t necessarily be the artwork you’d expect opposite such a high-class establishment. As it happens, the boss of said high class establishment seems to be very enthusiastic, and fingers crossed he’ll become a customer. 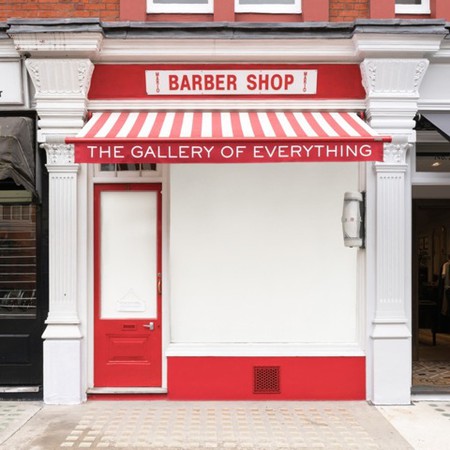 The Gallery of Everything

How did you end up collaborating with Javis Cocker on Journeys Into The Outside?

Jarvis became a friend to the Museum of Everything through his monumental TV series Journeys Into The Outside, which he made with his friend Martin Wallace in 1998. The two cooked up the project, took it to the broadcaster, got the money, and went off on this extended jolly to visit all these unusual venues around the world. Many of the artists were still alive; they’re all dead now, so he really managed to capture something. So we picked a handful of the artists Jarvis visited, including Nek Chand Saini, Abbé Fou- ré, and Howard Finster. 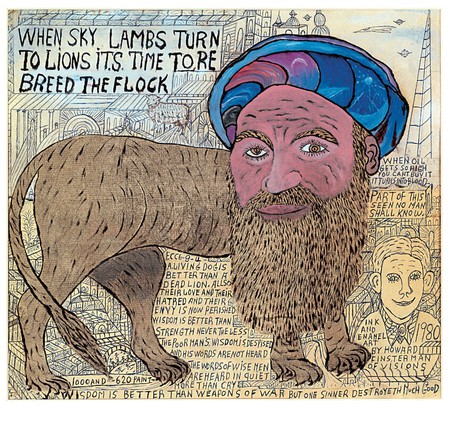 Howard Finster, Untitled (When Sky Lambs Turn Into Lions Its Time to Breed The Flock), 1980. Courtesy of The Gallery of Everything

Can you tell us about the artists in the show, as some of them were real characters?

Howard Finster and Chomo were very prolific. Finster was a lay preacher who had the patois; he made 20,000 plus works over the course of his life, so we wanted to go out and find early and unusual works when he was really on his mission. We have a guy who never gets any airing – WC Rice, who was another preacher – but his was a much simpler act. It wasn’t beautiful pictures, it’s just crosses stuck in a garden with a big sign saying, ‘You’re going to hell if Jesus doesn’t save you.’ When I look at Rice’s work I see a conceptual practice – it’s rooted in Jesus but actually you can take a step away from that and see he’s communicating something. It’s performative, it’s conceptual, and actually, its gesamtkunstwerk. It’s one of the most authentic practices that you get in this nonacademic field. In my mind, it connects much more to what Jean Dubuffet was looking for. He was very interested in anti-cultural making that was still in visual culture. So WC Rice definitely fits into that because it’s all ugly. You don’t look at it and think that’s lovely. My mum will really not like that room. 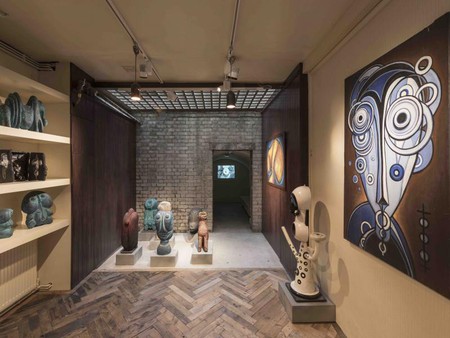 Courtesy of Gallery of Everything

Because the gallery will give you the ability to work with artists that don’t always fit into the context of a museum show, what can we expect from the exhibition programme? Will you do more solo shows?

It’s a really good opportunity to do solo shows. I tend to like double acts, but it depends on the artists. The gallery allows for quite a varied programme, so we’ll be mixing between historic and contemporary artists and new discoveries. I’m interested in any kind of personal making that is outside of that narrow box of art. A publication recently covered the gallery opening saying: “Museum of Everything opens outsider art gallery,” to which I wrote them a letter thanking them for their kind attention and telling them off for cheap prose and shorthand because the work itself is more complex. If you can be arsed to write about it, do it in a meaningful way – and that means avoiding terms like ‘Outsider Art’. 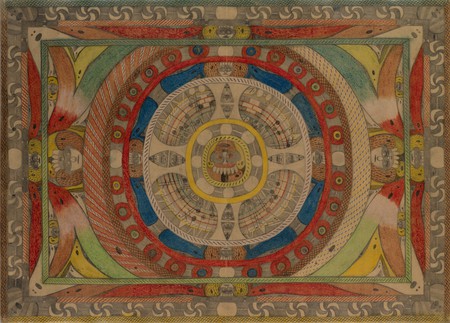 Do you think ‘Outsider Art’ is a lazy term?

It’s not that it was ever meant to be a negative term; it was the art historian Roger Cardinal who came up with it with his publisher because they wanted an English version for Dubuffet’s term, ‘Art Brut,’ which itself has problems. All these words have problems, but Dubuffet was looking for something that went against the art of his time so this idea of a raw type of art appealed to him. The idea was that it was raw as opposed to overcooked, and I think his point – and I agree with Dubuffet completely that most artists are like haute cuisine – fussy – and what he wanted was mashed potatoes and a steak. He wanted the basic and the simple because he said that had an authenticity and a truth to it. 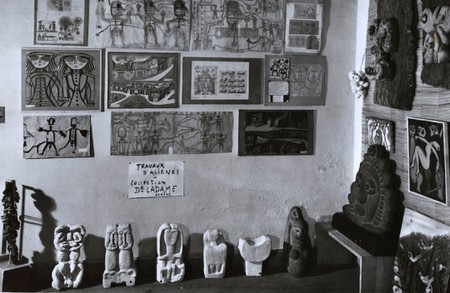 Foyer d’Art Brut, 1948. Courtesy of The Gallery of Everything

As you’ve mentioned Dubuffet, can you tell me what you have planned for Frieze masters this year?

We are doing a really bonkers group show. It’s a little bit in reaction to last year, when a gallery did a huge mise en scène of an asylum in the middle of Frieze Masters. The goal was to contextualise Jean Dubuffet’s work, but in the end I found it a little offensive. It did fester in my mind as it seemed to me that there was a complete misunderstanding of what Art Brut was, and what Dubuffet was interested in. Now that Dubuffet is such a high profile artist I thought, ‘let’s look at his very first step.’ During the Second World War he worked for the family wine business, but he was frustrated and after the war had an epiphany to commit to art. He travelled with all sorts of people including Le Courbusier, and visited asylums and ethnographic museums looking for material. While he was doing his own shows, he was not celebrated; he was a kind of enfant terrible, he set up the Foyer to exhibit his discoveries.

Over the next couple of years it evolved into showing 63 artists. What we’re showing is a selection of these artists. We’ve been quite informal in our interpretation, and have based it on what we can display. There are about dozen artists and we have one work for sale by each of those artists, which is quite rare. The point we are making is that Dubuffet’s own practice was inspired by this work. Collectors who are interested in Dubuffet should really be looking at this material, and those that don’t really understand the history of non-academic art. Dubuffet made a brand for a category that he thought needed defining and protecting and this is the beginning of that story.