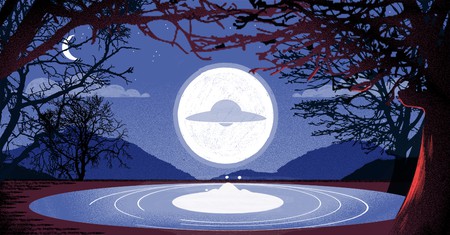 Whether it’s mysterious lights in the sky, little green men or crop circles that appear overnight, people have been searching for evidence of extraterrestrial life throughout history.

Sometimes written off as manifestations of an overactive imagination, speculation about what lies beyond our world has occurred throughout human history. Some of it nightmare fodder – abduction, probing, intergalactic warfare – human fascination with extraterrestrial lifeforms might stray us from reason but it will always be a subject of intrigue.

Written in 1088, Shen Kuo’s Dream Pool Essays feature one of the earliest recorded instances of an Unidentified Flying Object (UFO). In a passage called “Strange Happenings,” Kuo describes an orb-like vessel that hovered in the night sky over the Chinese city of Yangzhou:

“…[The vessel] opened its door and a flood of intense light like sunbeams darted out of it, then the outer shell opened up, appearing as large as a bed with a big pearl the size of a fist illuminating the interior in silvery white. The intense silver-white light, shot from the interior, was too strong for human eyes to behold; it cast shadows of every tree within a radius of ten miles. The spectacle was like the rising Sun, lighting up the distant sky and woods in red. Then all of a sudden, the object took off at a tremendous speed and descended upon the lake like the Sun setting.”

The event has been interpreted by modern ufologists (people who study UFOs) as an extraterrestrial event, and is often referred to as “The Pearl.”

Miracle of the sun / Miracle at Fátima

According to lore, three Portuguese shepard children came across what they described as an angel in July 1917. The children told fellow villagers that the apparition informed them that it would return to perform a miracle in October of the same year.

Thousands flocked through the rain to the Portuguese town of Fátima, hoping to see if the prophecy would come true on 13 October 1917. While skeptics were certain that the event was merely the result of childish tales run amok, the apparition fulfilled its promise.

First-hand accounts of the event in Portuguese newspapers tell of the sun glowing in the sky, emanating enough heat to dry their rain-soaked clothing, then hurtling towards the earth in a zig-zagging motion. Some feared that the event was a sign of the apocalypse, but luckily for them, it stopped as abruptly as it began, leaving the crowds with an overwhelming sense of awe and confusion.

The Catholic Church officially recognised the event as a miracle in 1930, but Portuguese historian Joaquim Fernandes of Porto University has other theories. In his books, titled Heavenly Lights, Fatima Revisited and Celestial Secrets, Fernandes theorises that there is evidence to suggest that the people gathered on 13 October 1917 actually saw a UFO.

War of the Worlds

Intended as a dramatic reading of HG Wells’ classic, War of the Worlds, the 30 October 1938 radio broadcast by 23-year-old Orson Welles sparked temporary hysteria as listeners misinterpreted the show as live reporting of an alien invasion.

Rather than read the story in its original construction, Welles and his fellow castmates of the Mercury Theater on the Air decided to perform it as a fake breaking-news broadcast. Listeners tuning in at the beginning of the show would have been privy to the disclaimer that explained the broadcast was based on fictional events but those tuning in late took the reported events to be fact.

According to newspapers, the broadcast resulted in a temporary panic. Curious New Yorkers flocked to the streets to see if they could catch a glimpse of the alien space ships while those who were more cautious swarmed shops to stock up on provisions.

The story of mass hysteria in the streets of New York City has become urban legend, but further inquiry into how listener numbers were recorded suggests that the panic was as much a work of fiction as the false reports of alien invasion.

Roadtrippers through Roswell, New Mexico are well aware of the city’s extraterrestrial history. Images of UFOs and spindly aliens adorn city establishments. Even though visitors are unlikely to get a glimpse of the little green men, it remains a major draw for tourism.

It all started when rancher William Brazel collected debris from a flying object that had crashed in 1947. Brazel reported his findings to the sheriff who reported it immediately to the United States Army Air Force. In their first official report, the Roswell Army Air Force Base reported that the debris came from the crash of a “flying disk”, but the story later changed when officials claimed the debris was from a fallen weather balloon.

The apparent message shift has led ufologists to theorise that the United States government engaged in an elaborate cover-up to hide the existence of extraterrestrial life. Conspiracy theorists allege that the ruins of the Roswell UFO, and the aliens it carried, are held at Area 51 in Nevada where they are studied by government scientists.

The event at Roswell led to more speculation about the existence of extraterrestrial life in popculture, and by the 1980s it became somewhat of an obsession. British pranksters Dave Chorley and Doug Bower capitalised on the growing interest of alien encounters and started making crop-circle patterns in wheat fields in rural England in the late 1970s.

The patterns thoroughly perplexed both scientists and ufologists until Chorley and Bower came clean in 1991. The pair demonstrated their technique to media gathered in Warminister where they used a large beam to flatten wheat crops in artistic patterns.

Recent droughts in the UK have revealed a different type of crop circle, though they involve more time travel than space travel. Called “cropmarks“, patterns of healthy grass in fields of sun-scorched reveal where prehistoric structures once stood.