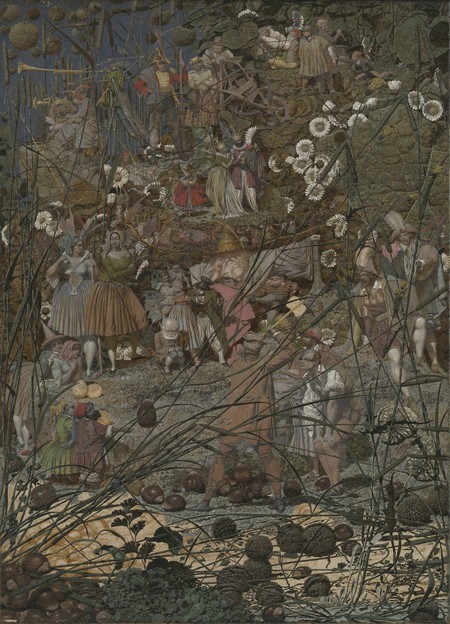 Over the past hundred years our attitude towards mental illness has dramatically changed. Few artworks on public display can speak as eloquently to such changes as Richard Dadd’s extraordinary The Fairy Feller’s Master-Stroke (1855-64). Culture Trip takes a closer look at the painting, which not only became an inspiration to the Surrealist movement but also was apparently Freddie Mercury’s favourite artwork.

In 1843, Richard Dadd (1817-86), a promising young painter, killed his father. Preoccupied with ancient Greek and Egyptian theology after a tour of the Middle East, Dadd went on to experience delusions and was under the impression he was a descendant of the Egyptian god Osiris and needed to kill those possessed by demons, including his father.

Instead of being tried for murder, Dadd was diagnosed as being mentally ill and escaped capital punishment under the new ‘M’Naghten rule’, which allowed a defence of insanity to a criminal charge. He was subsequently sent to Bethlem Royal Hospital – known as Bedlam and now the Imperial War Museum – for 20 years until he was transferred to Broadmoor where he would see out his days until his death in 1886.

During his 43 years of confinement in the two asylums he was allowed to continue painting. Much of the work he made was collected by those who cared for him. He painted The Fairy Feller’s Master-Stroke for Bethlem steward George Henry Haydon. Although Dadd spent nine years on the intriguing work – made all the more fascinating by the artist’s circumstances – it remained unfinished.

The painting centres around a gathering of fairies in verdant undergrowth waiting in anticipation for the feller, a woodsman, to split a hazelnut that will be used to create Queen Mab’s carriage. “It’s based on a speech by Mercutio in Romeo and Juliet where he describes Queen Mab riding through people’s brains at night and giving them dreams and nightmares,” says Tate curator Carol Jacobi.

The fantastical themes in Shakespeare’s plays were popular subject matter for many Victorian artists, with fairy painting in particular providing an escape from the demands of industrial advancement. Before he murdered his father, Dadd, who trained at the Royal Academy Schools, was considered a “prodigy”, as Jacobi puts it, and was “quite debonair, charming and a little bit wild. He was extremely successful and liked. He made his name with his fairy paintings which were astonishing feats for the imagination as well as painting.” 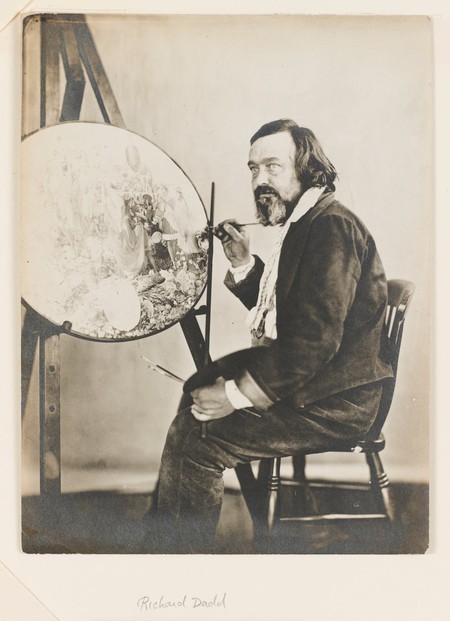 Richard Dadd at Bethlem in 1857 working on 'Contradiction' | Photograph: Jonathan Stokes/Courtesy of Bethlem Museum of the Mind

His focus on the subject continued while he was incarcerated. Dadd meticulously built up layers of tiny dots to create the crowded composition in The Fairy Feller’s Master-Stroke. “It creates an even more claustrophobic effect. It’s very, very extreme,” says Jacobi. This style of painting and the ambiguous folkloric narrative create an intense, mesmerising work, with an unusually tight viewpoint. “He does this really weird thing in all paintings where he gives you a really close foreground so it feels as if your eye is right next to the picture and it gives you this strange kind of eerie, uncanny effect,” says Jacobi. “The thing I love about the picture is the way all the grass brings you in. It’s almost like the figures are behind bars in a strange way.”

Apart from Oberon and Titania, King and Queen of the Fairies in A Midsummer Night’s Dream, the other figures are all from Dadd’s imagination. It’s thought some might be based on characters he encountered in Bethlem as well as taken from the nursery rhyme ‘Tinker, Tailor’ as a variety of professions are illustrated. It’s also been suggested the man in the top right-hand corner with a pestle and mortar could indeed be Dadd’s father, who before he ran a gilding company was a pharmacist. There are also lots of coupled figures, something that Jacobi says gives the painting a “subtle underlying sexuality.”

When Dadd was transferred to Broadmoor the painting was left at Bethlem. But shortly after the move he made an exceptionally detailed watercolour copy called Songe de la Fantasie (1864), revealing the importance of the original painting. 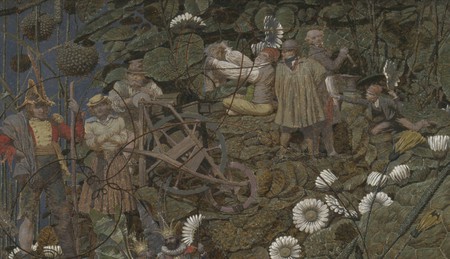 It would be just over a hundred years later when Dadd’s work, including The Fairy Feller’s Master-Stroke, was brought back into the public eye at the Tate Gallery’s first comprehensive survey of the Victorian artist – made possible due to the extensive work of Bethlem’s archivist Patricia Allderidge. In 1963 the First World War poet Siegfried Sassoon had bequeathed the work to the Tate in honour of Julian Dadd, the painter’s nephew, with whom Sassoon had served in the war but who committed suicide after he was wounded and both his brothers were killed.

Opinions towards mental health started to change after the First World War. “The painting became a talisman of a new, more humane understanding of mental illness that grew out of people writing about shell shock,” says Jacobi. Then in the 1930s the thinking changed again, with artists adopting the language of psychoanalysis and the theories around the unconscious, the underpinning of Surrealism. By the ’60s the painting would take on a new role with “the massive backlash against the whole asylum system,” says Jacobi. “The painting became a token of counterculture, of the anti-asylum movement and yet another new attitude to mental illness.”

Today, the painting retains its otherworldly quality and continues to speak to a generation of viewers regardless of age or artistic sensibility. “So many people have been intrigued by it,” says Jacobi. “Freddie Mercury is the most famous, who actually wrote a song called ‘The Fairy Feller’s Master Stroke’ – apparently it was his favourite painting.”

“Perhaps because it is so inscrutable – I think inscrutable is a good word for it – it does really intrigue people. I’ve looked at it so many times, and every time I look at it I see something I haven’t seen before. It’s a little bit like a book in [that] there are so many nooks and crannies to puzzle over.”

On permanent view at Tate Britain, The Fairy Feller’s Master-Stroke is a fascinating example of a work created in difficult and troubled circumstances. Its mysteriousness is captivating and displays the singular uniqueness of this artist who could have disappeared from recognition.

Richard Dadd’s ‘The Fairy Feller’s Master-Stroke’ is on view at Tate Britain in the 1840 gallery.