The Dark Reflections of 'Black Mirror' and 'HyperNormalisation' 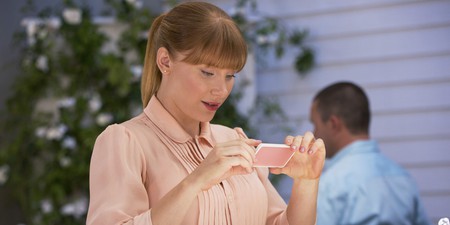 Having worked together on BBC series Newswipe, Adam Curtis and Charlie Brooker have two very different projects out within a few days of each other. The connections between Black Mirror and HyperNormalisation may not be intentional, but they are inescapable, reflecting not just the pessimistic viewpoints of the filmmakers but also the depressing realities of modern life. 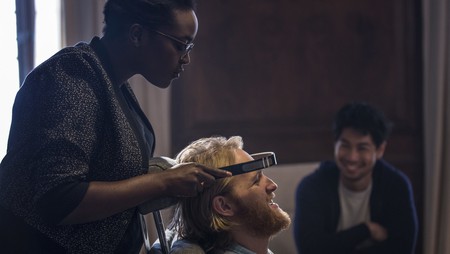 Brooker’s wry look at technology began on British terrestrial broadcaster Channel 4. Two seasons and a Jon Hamm Christmas special later, the latest series of Black Mirror not only has a noticeably bigger budget, but an extended six-episode run. None of this is too surprising given that subscription service Netflix has thrown its weight behind the satirical sci-fi series.

Each episode is a standalone story, with occasional references to other episodes, where the focus is on the near future and the technology available in these alternate timelines. The message is always on the downbeat side of things, serving as both a warning of where we are going as a society and where we are as individuals.

Adam Curtis’s contributions to Brooker’s media and current affairs review show Newswipe always had a political bent to them. The short films always teased a bigger story, and the documentary-makers incisive, opinion-led narration have found a natural home in the post-9/11 world.

Feature-length versions of his films, such as The Power of Nightmares and The Trap: What Happened to Our Dream of Freedom, were previously delivered over three episodes, but his new, sumptuously realised essay on the political failings of the last forty years, clocks in at just under three hours with an expectation that the viewer will devour it in one sitting. It’s a fair assumption to make as HyperNormalisation is a mesmerising whirlwind of jaw-dropping news clips and addictive audio via the words of Curtis himself and a soundtrack featuring the likes of Radiohead and Nine Inch Nails.

In both shows, pessimism reigns supreme.

The only exception is Black Mirror‘s fourth episode, San Junipero. Mackenzie Davis plays Yorkie, an introverted woman who plays up to the geeky stereotype of an ’80s loner. Kelly (Gugu Mbatha-Raw) is the polar-opposite, a fun-loving free spirit who is a social butterfly unable, or unwilling, to stay in one place for any length of time.

San Junipero, it later turns out, is a computer-generated afterlife where individuals can upload their consciences and theoretically live forever. In the “real-world”, both Yorkie and Kelly are elderly women approaching the end of their lives. However, they form a bond in the virtual reality that transcends everything else. 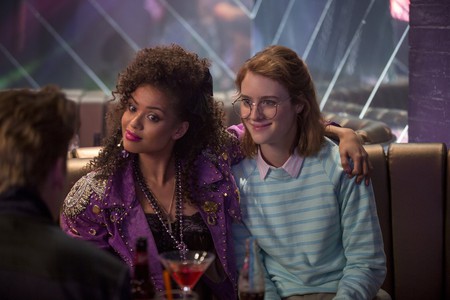 It’s a touching and moving instalment of the show, which feels more like a holiday from the the other grim realities on offer. Even in this feelgood episode, however, there are more than enough moral dilemmas to juggle as well as the overriding knowledge that we are watching two women die before they can even contemplate happiness.

Still, San Junipero is an absolute laugh-riot compared to HyperNormalisation. The central premise is laid out in the opening moments, with Curtis himself prewiring us that: “Our world is strange and often fake and corrupt. But we think it’s normal because we can’t see anything else. HyperNormalisation – the story of how we got here.”

The starting point is the decisions of two well-known political heavyweights in the 1970s and their short-sighted decisions that have, Curtis asserts, led to the chaos we see in the world today.

There is always a hint of revisionism in Curtis’ work. Using hindsight to view past mistakes is easy to do, but the way in which this elaborate theory is patched together is outstanding in its detail. We see how the grandstanding of US diplomat Henry Kissinger and rival Hafez al-Assad (then president of Syria and father of Bashar Al-Assad, the current incumbent of that office) unleashed modern day terrorism and political impotence against finance corporations.

Liberals aren’t given an easy ride either, with the rise of Donald Trump (preceded by a lengthy review of his dramatic fall in the ’80s and ’90s) blamed on the use of social media as an echo chamber for left-wing elites. 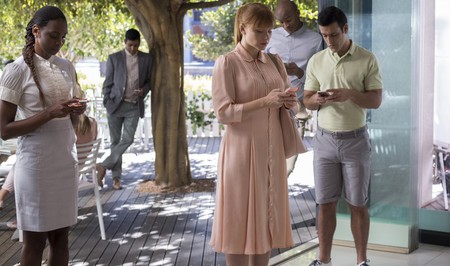 Social media is squarely in the firing line for most of the episodes of Black Mirror, too. Although it lacks the subtlety and precision of The Entire History of You (the Toby Kebbel episode from the first series widely regarded as the best of the show’s back catalogue), Nosedive’s scattergun approach hits the mark more often than not.

Bryce Dallas Howard adds some Hollywood glamour to this look at a world not dissimilar to our own, where social ranking via apps and smartphones are held in high esteem. Howard’s character, Lacie, is desperate to get to an approval rating closer to a 5 than her current position hovering above a 4.

As such, Lacie is outwardly polite to all and unable to resist any opportunity to climb further up the ladder when it presents itself. In her desperation, however, the calm demeanour she projects begins to slip and she gives cause to others to down-vote her. It’s a dramatic fall from grace that constantly refers back to our own reliance on online status as an arbiter of success.

Other episodes in the new series of Black Mirror fail to hit the highs of Nosedive or San Junipero. In Playtest, the old virtual-reality-gaming-trope of a waking nightmare is played out with occasional thrills but an ultimately hollow message. The final episode, Hated in the Nation, follows the dire consequences of social media firestorms in a world where a hashtag can kill, but is hampered significantly by a substandard Doctor Who plot device that M. Night Shyamalan would be proud of.

The conclusion of HyperNormalisation, inevitably, focuses heavily on Syria and global fears over terror. The role of cyberspace is never underestimated, but where Curtis succeeds is in keeping his myriad of differing viewpoints on a single track.

It’s an unprecedented position for Brooker to be in, but his show feels like the fluffy, inconsequential oddity of the two releases.