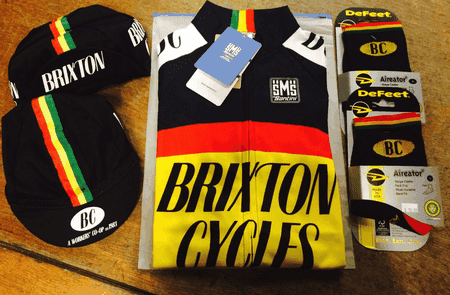 Wandering around south London, it’s not uncommon to see the odd cyclist kitted out in rastafarian colours. For locals, the distinctive design is immediately recognisable as that of Brixton Cycles (BC), the bike shop-cum-cycle club that has been a mainstay in the area for over 35 years. Walk through Crystal Palace on a Sunday morning and you’ll see its members gathering outside Cafe St Germain, ready to head down the hill and into the Kent countryside.

Originally set up in the early 1980s, the shop was supposed to provide a customers with a middle ground; somewhere between a store for serious racing junkies and toddlers wanting brightly coloured tricycles. There was a feeling that a solid, dependable bike shop that catered for a variety of customers didn’t exist, and so a group of friends set about changing that.

In 1980s London there were grants available to start co-operatives. Brixton was still feeling the effects of the riots and the original setup for Brixton Cycles was basic at best; wages were low and workers were sometimes housed in local squats in the area. That said, Brixton has a community ethos to rival any area in London and that saw BC forge a reputation for reliable, trustworthy service – somewhere that treated its members fairly.

This was coupled with an increased interest in cycling as a whole. A combination of the continued and relentless rise in the cost of public transport, increased awareness of environmental issues and the sustained success of British cycling on the international and Olympic stage all contributed to the rise in the number of people taking to two wheels. 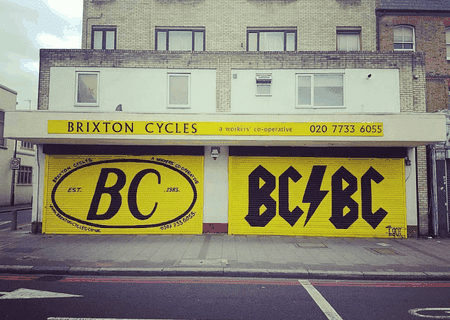 As Brixton Cycles’ members increased, its Coldharbour Lane shop emerged as a local hub for matters far beyond those simply bike-based. Exhibitions, events, political campaigning and gigs were not uncommon on the shop floor and it stayed that way until the shop moved round the corner, alongside the skatepark behind Brixton Academy in 2016. This remained its base until last year; after being threatened with closure (the building that houses the shop is scheduled for demolition and new build apartments as part of the area’s wider gentrification), they eventually found a home on Brixton Road, opposite the area’s iconic Brixton Jamm venue. The move required crowdfunding and anyone that visits the shop today can see the walls adorned with over 1500 names; every single person that donated and helped keep the club alive.

Today if offers a few key services. There’s the shop, where you can buy bikes, accessories and BC merchandise, their ‘walk-in-surgery’ for quick repairs, or the Brixton Cycles Club itself. As a co-op, everybody who works at the shop is effectively a part-owner ensuring equality across the board, from salaries to a say in business decisions and responsibilities, with most of those made at monthly meetings.

The cycling club part of BC has over 200 members, and while they have a history of track cycling, the club includes riders across a range of abilities and ages. There is a hefty emphasis on the social aspect, with a much deserved drink as crucial to the day as the ride that precedes it. Joining a cycle club can be a daunting prospect; it’s not uncommon for clubs to dictate some fairly ambitious paces and have very little time for anyone putting that pace into jeopardy. At BCC there is a non-drop policy, so they will always wait for the slowest member in the group. Potential members can meet up on a Sunday (as mentioned above) for two weeks to get a taste and then decide if it’s for them long-term. 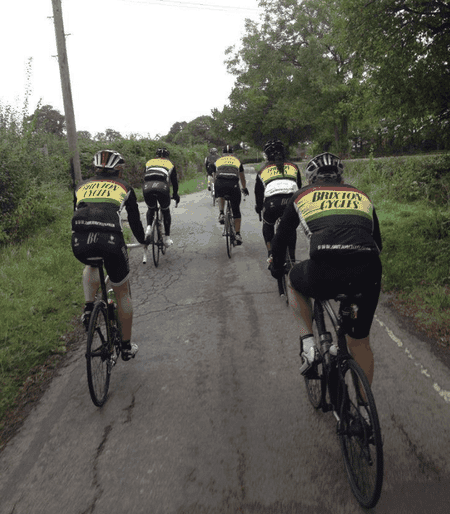 BCC out on their Sunday ride. | © Brixton Cycles

As well as the weekly group rides that the club organises, there is also the BCC Super Madison. This annual event is held at Herne Hill Velodrome with a varied program that includes races with men’s, women’s and mixed events. As well as the main madison event there is a keirin, different sprint events and a mixed doubles madison pursuit. Whether racing or not, there’s also the usual assortment of stalls stocked with craft beer, great coffee and fantastic food – think plenty of Caribbean cuisine in homage to Brixton’s roots.

Because of BC’s structure, a co-op in every sense of the word, staff loyalty is extremely high. Some have over a decade of experience under their belt, while others have been at BC for over 25 years. That loyalty is then passed on to customers. The workforce stock and sell what they want, and as a result they only sell equipment that they themselves use, which in turn promotes a trust and reassurance with anyone making a purchase.

The shop move two years ago ensured a historic part of Brixton remains so. The area continues to undergo a transformation that prices out local residents who have called Brixton their home for decades, rather than simply when it became trendy to do so, and places like Brixton Cycles are helping to keep its community intact. The hope is that their Sunday morning rides and their shop doors remain open for another 30 years and beyond.