The Best Of The London Pub Crawls 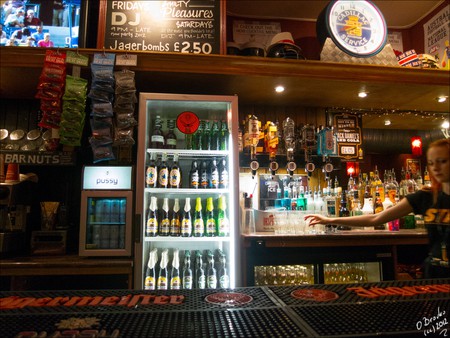 A London pub crawl can be great way to get to know the city, depending, of course, on the fogginess of your head the next day. A little bit of planning goes a long way when it comes to this classic British pastime, saving on hours spent roaming the streets looking for good looking boozers. So give a little bit of structure to your drink session with our picks of the best themed bar crawls in London.

Shared with the wider world by some very enterprising board game fans, the Monopoly Pub Crawl is made up of a mammoth 26 pubs, with the aim of taking in every street and train station on the game board itself. There are two versions— the original, which was satisfied with not visiting the pubs in proper Monopoly order in the interests of saving time, and the in-order route, which involves a lot of extra travel. For bonus points, why not dress up as one of game pieces, or even Rich Uncle Pennybags?

Taking the planning process for the #MonopolyPubCrawl very seriously. Trying to work out all the pubs that don't open or close early on Sundays and the distance between each! Big thanks to http://dontstopliving.net/thirsty-thursdays-the-ultimate-monopoly-pub-crawl-2015-in-london-england/ for uploading this incredible map📍🗺

You’ll be spinning in circles after this mammoth pub crawl, which hits 27 pubs outside 27 tube stations over 12 hours, and demands 28 drinks from its followers. The crawl is inspired by the TFL Tube map, as its rightly pointed out that the Circle line is not a circle at all, but rather resembles the outline of a bottle of beer. Talk about intelligent design.

The pub crawl for the thinking drinker, this tour heads exclusively to the drinking dens associated with literary history, as well as those frequented by members of the film and literature industry today. Led by actors and writers (sometimes in character), the tour takes in a dozen pubs and private members clubs — though only stopping at a few of them for drinks — and introduces attendees to the life and works of Anthony Burgess, Charles Dickens, Virginia Woolf, Dylan Thomas, William Shakespeare, T.S. Eliot and more.

We've added a couple of streets and visited most of the others! #literature #maps #harrypotter #london #tourist #londonliterarypubcrawl

There are a couple of companies delivering pub crawls in Camden — The Camden Pub Crawl promises an evening packed with free shots, drinks discounts, and official t-shirts. If you’re looking for something a little more low-key though, it’s easy enough to make your own crawl by simply following Camden High Street. Start at The Black Heart or the World’s End near Camden Town Station (or take a short detour up Parkway to Dublin Castle, Amy Winehouse’s favourite) and then head up Camden High Street on the Camden pub mile, taking in The Elephant’s Head, Lock 17, The Lock Tavern, The Monarch, and finally, The Enterprise outside Chalk Farm Station.

Another fan-made route, this challenge involves visiting every Sam Smith’s pub in London. Super popular with real-ale enthusiasts, Samuel Smith’s are Yorkshire’s oldest brewery, operating a line of 200 pubs across the UK (but mostly in the North) in which to sell their beers and ales — and only theirs. There’s far too many pubs in the challenge to do them all in one day, but the central London pubs can easily be condensed into a crawl. Take a look at this mini route courtesy of The First Pint.