The Best Men's Grooming Spots in Hackney and Shoreditch 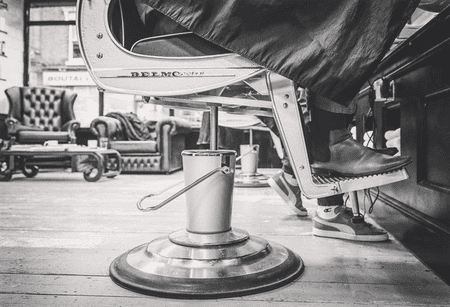 We’ve scoured East London for the best male grooming establishments so you don’t have to. From hidden Hackney gems to Old Street‘s best-known destinations, consider this your must-have guide to what’s what when it comes to finding that perfect cut.

Market, Store
Facebook
Email
Twitter
Pinterest
Copy link
Share
Map View
There’s a no-nonsense approach to The General’s Barbershop in Hackney, and its initial inconspicuous position next to London Fields is a far cry from where the brand is today. The epitome of East London-cool, The General’s Barbershop launched as a pop-up in Netil Market and was set in a purpose-built shopping container with a similarly low-key approach to interior design. Its popularity allowed for quick expansion and the now fully fledged concept store is positioned under the railway arches in London Fields. The approach to treatments remains the same, however, but it now comes with a little added luxury. The current barbershop features a well-stocked bar, Italian coffee, an art exhibition space as well as offering its highly-regarded grooming services. A 15-minute beard trim starts at £10 and a haircut costs around £25.
Open In Google Maps
47 Martello Street, Hackney, London, England, E8 3PE, United Kingdom
+447724053052
Visit Website
Give us feedback

Cinema, Shop
Facebook
Email
Twitter
Pinterest
Copy link
Share
Map View
Positioned on Redchurch Street and offering so much more than just a barbers (as the name suggests), Barber and Parlour is one of East London’s coolest hotspots. As well as Neville, it’s male grooming salon, there’s a casual dining space, a cocktail bar and the coveted Electric Cinema, so it’s the kind of place you can go for a haircut or a beard tidy and then pop downstairs to meet your friends at the bar… perfect. Part of the Soho House group and offering a premium service in a design-led space, this is the grooming shop to head for if you’re after a little luxury alongside your spruce-up. Pop in for a quick beard trim and condition (£15) or indulge in the Full Groom (£70) which includes a shampoo and haircut as well as a traditional wet shave or beard shape.
Open In Google Maps
64-66 Redchurch Street, Shoreditch, London, England, E2 7DP, United Kingdom
+442033761777
Visit Website
Give us feedback

Store
Facebook
Email
Twitter
Pinterest
Copy link
Share
Map View
Despite now being open in various locations across the city, Murdocks is an East London business through and through, and it draws from the creative elements of the area within everything that it represents. The first store opened on Old Street in 2006 and it’s now positioned on our most-loved road in the city, Redchurch Street. Every element of the brand is considered and it champions a contemporary approach to luxury, exuding confidence in its service and product that’s admirable and far from arrogant. The menu of services is a comprehensive one, and options of note include the facial (£35) and the How To Shave Tutorial (£75) which is exactly what it says on the tin, plus a wet shave by one of the establishment’s knowledgable stylists.
Open In Google Maps
46 Redchurch Street, Shoreditch, London, England, E2 7DP, United Kingdom
+442033937946
Visit Website
Give us feedback

Beauty Salon
Facebook
Email
Twitter
Pinterest
Copy link
Share
Map View
The idea behind setting up Jones & Payne in its sought-after Shoreditch location was to bring a little West End luxury east and to fuse it with the creativity of its new home. Interiors capture a traditional English heritage and emphasise the brand’s dedication to style and quality, with leather chairs, exposed brick and wood flooring creating a homely aesthetic that ties in nicely with the welcoming atmosphere. There’s a real focus on attention to detail here and it’s the little touches (like in-built phone chargers) that elevate the experience that little bit further. Prices for a male cut range from £45 – £68.
Open In Google Maps
73 Curtain Road, Shoreditch, London, England, EC2A 3BS, United Kingdom
+442076136550
Visit Website
Give us feedback

There’s nothing pretentious about Huckle the Barber, but owner, Chris Ward, is confident in his own skills and his team’s expertise and rightly so – the quality here is undoubtedly high. The atmosphere is relaxed and welcoming and the playlist is one that’s sure to spark your imagination. Sit back in one of the carefully chosen leather chairs and enjoy a glass of whiskey or a locally-sourced beer whilst you have your treatment. A shave with a cut-throat razor costs £40 and a wash and haircut £45.

Beauty Salon
Facebook
Email
Twitter
Pinterest
Copy link
Share
Map View
Every barber at Jack The Clipper has Turkish heritage and draws from ancient techniques within his/her work, applying them to the latest trends to fuse quality with aesthetic. But it’s the witty branding that sets this establishment apart from its competitors, as well as the commitment to the wonder that is facial hair (they offer a service that’s especially tailored to ‘the biggest beards’). From a classic wash and cut to The Ultimate Barbering Experience (£58 at the Bow Lane branch) customers have the option to make a quick pit stop or to indulge in a longer session of pampering.
Open In Google Maps
47 Bow Lane, London, England, EC4M 9DL, United Kingdom
+442086163708
Visit Website
Give us feedback

Beauty Salon
Facebook
Email
Twitter
Pinterest
Copy link
Share
Map View
Male grooming doesn’t come much more comprehensive than at Jimmy Bodur on Old Street, where its owner, Jimmy, specialises not only in aesthetic treatments such as facials, hair removal and male manicures, but also in massage therapy. He believes that deep tissue sports massage can not only have physical benefits, but psychological gains as well, and the main aim with everything on the treatment menu is to ensure the customer leaves feeling that little bit better about himself.
Open In Google Maps
193 Whitecross Street, London, England, EC1Y 8QP, United Kingdom
+447891007759
Visit Website
Give us feedback
Give us feedback