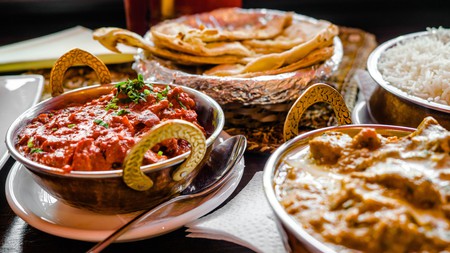 Soho may not have the same concentration of Indian restaurants as other areas of town, such as Brick Lane, but the neighbourhood is nonetheless home to a good spread of Indian cuisine, including the oldest Indian restaurant in London.

Family-run Gopal’s has been serving the people of Soho since 1988 and the quality of the food and the service has stayed consistently high. The menu is varied and authentic but not overly long, with the thalis being particularly good. They also have a couple of Indian wines on the drinks list as well as Cobra and Kingfisher beers.

From the original site in Covent Garden to several further sites in London and one in Edinburgh, Dishoom has become one of the most popular places to eat in the capital. Each site is modelled after the Irani cafés popular in 1960s Bombay (now Mumbai), yet each has its own individual design quirks. The Carnaby restaurant pays homage to the area’s history by incorporating touches of Mumbai rock and roll. The food offering is much the same as at the other Dishooms, including that famous bacon naan roll and house black daal, but there’s also a special of sali boti – lamb braised in gravy, topped with crunchy sali chips and served with a buttered roomali roti – that’s only available here.

Classic North Indian fare is very much the name of the game at the Delhi Brasserie, which has been open for 30 years and has welcomed many famous faces, including Ronnie Scott of the legendary jazz club two doors down. Curries are the backbone of the menu, but there are also platters and thalis, should you want a complete meal on one plate.

Restaurant, Indian
Facebook
Email
Twitter
Pinterest
Copy link
Share
Map View
Kati rolls – griddled parathas topped with egg, a meat or veggie filling, onions and chutney – are a popular street food all over India. The Kati Roll Company, which started in New York, serves up a handful of varieties, including shrimp masala, beef tikka and achari paneer fillings, which are perfect for eating on the go.

Opened in 1926, Veeraswamy is the oldest Indian restaurant in London and still has a certain opulence about it, with interiors inspired by the Raj. The restaurant has stayed true to its original philosophy of showcasing dishes from many regions of India, with tandoor plates sitting alongside street food like raj kachori, Kashmiri lamb and Keralan seafood. Finish with their gulab jamun, which hasn’t been off the menu since the doors first opened.

Starting off as a dinner served for just 12 guests at home, Darjeeling Express now specialises in the best Mughlai cuisine from its permanent venue in Kingly Court. The traditional way of eating Indian food is an important part of dining at Darjeeling Express, so expect plenty of tasty platters to be shared with your party.