The Best Hotels to Book Near St Katharine Docks 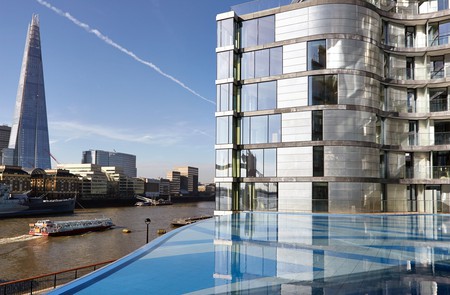 Tucked away next to the Thames, St Katharine Docks blends the past, present and future of London – as do the hotels that surround this relaxed riverside locale. What’s more, they’re all bookable with Culture Trip.

A maze of bridges, boats and businesses housed in trendy converted warehouses, St Katharine Docks is a little island of tranquillity in the centre of London. Starting life as a commercial dock in 1828 before being turned into a marina, it’s now packed with bars, restaurants and offices serving a steady flow of Londoners and tourists. There is a sense of old meeting new here, a vibe that bleeds into the surrounding hotel scene. 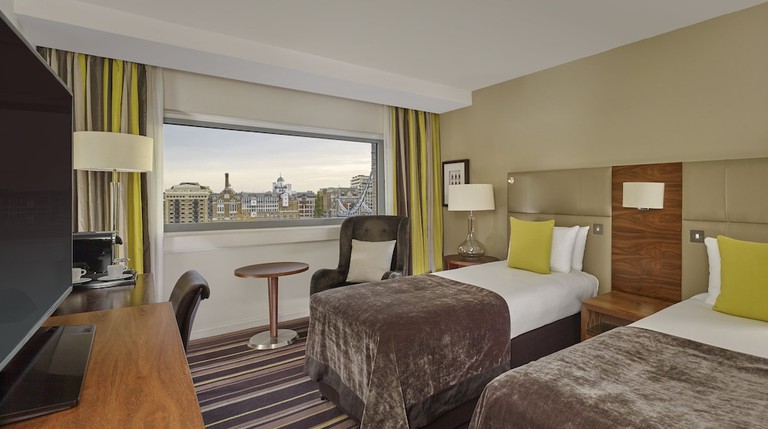 Courtesy of Tower Hotel / Expedia
View Rooms
Price Drop
Now from $128 per night
A location right on the Thames means those who stay at the Tower Hotel get a great view no matter which room they are in. Face the river and there’s Tower Bridge and The Shard. Turn the other way and there are the bobbing boats and hustle and bustle of St Katharine Docks. For history buffs, the Tower of London is, of course, on their doorstep, while the HMS Belfast, the most significant surviving WWII battleship, is within easy walking distance.
More info 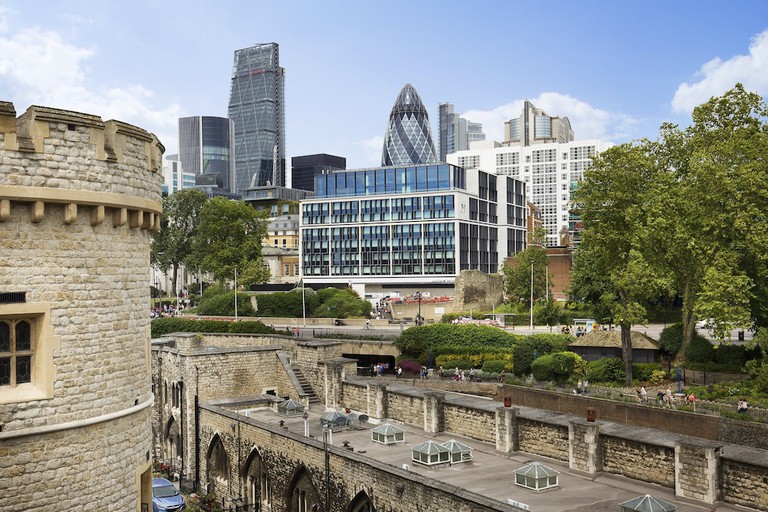 Courtesy of citizenM Tower of London / Expedia
View Rooms
Price Drop
Now from $139 per night
Sitting on top of Tower Hill Tube Station, citizenM is all about taking you above the thronging masses of London for some quiet contemplation. The best place to do that is at the seventh-floor cloudM bar, where the rooftop terrace offers the perfect vantage point to watch the world go by. Or sink into one of the super comfortable sofas next to some Queen Elizabeth II wallpaper and have creative cocktails with London’s young movers and shakers.
More info 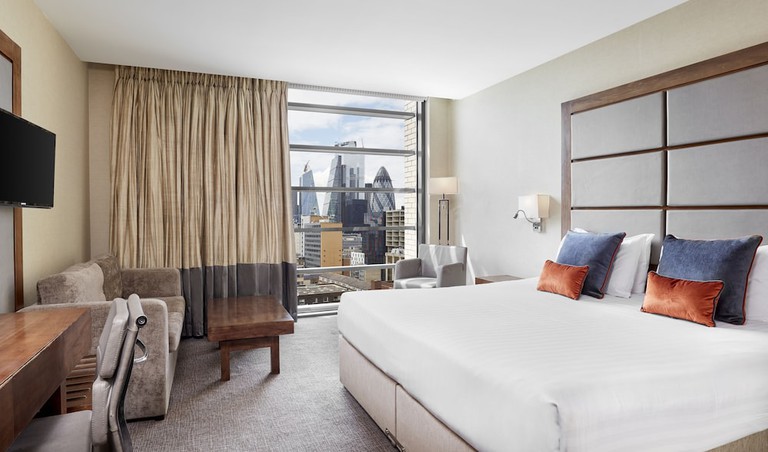 Courtesy of Leonardo Royal London Tower Bridge / Expedia
View Rooms
Price Drop
Now from $127 per night
While London is a city that never really sleeps, guests at the Royal London Tower Bridge don’t have that problem. Big comfy beds and quiet surroundings make the hotel a great place to recharge your batteries in between seeing London’s sights. And you’ll have many close by here. The Tower of London, Tower Bridge, Shakespeare’s Globe and Spitalfields Market should all be on your list before hitting the pubs and shops in the area.
More info 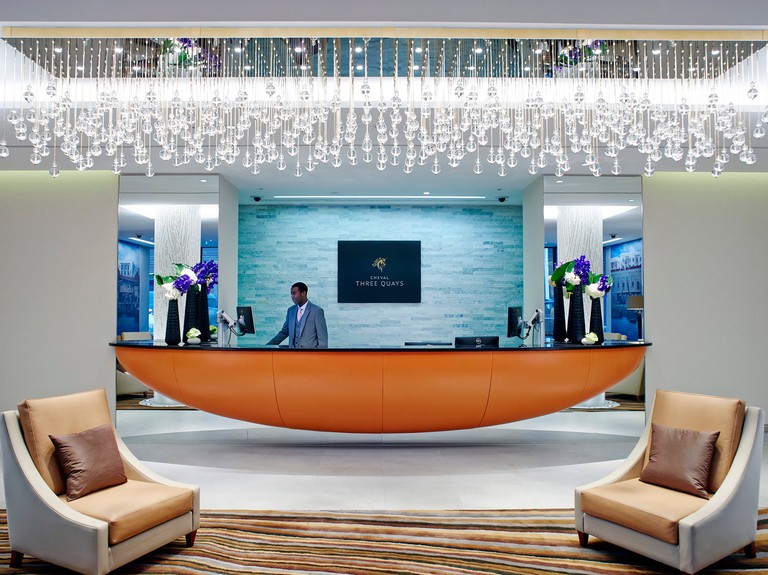 Courtesy of Cheval Three Quays / Expedia
View Rooms
Given its location right on the Thames opposite the HMS Belfast, it’s only natural that the Cheval Three Quays would have a water theme running throughout the hotel. A chandelier posing as a waterfall and bubbling water features greet you in the lobby, while the walls are covered in black-and-white images of the river. For the real deal, the luxury all-apartments, where you can stay one night or more than one year, have fantastic views of the Thames.
More info 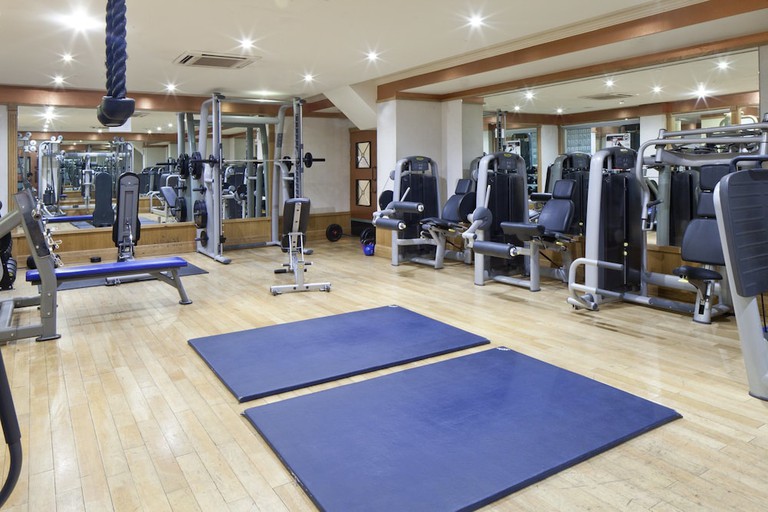 Courtesy of Leonardo Royal London City - Tower Hill / Expedia
View Rooms
Price Drop
Now from $137 per night
Modern amenities meet London’s storied past at the Leonardo Royal London hotel. Meals at the restaurant and bar come with views of the Roman Wall, while the Bank of England Museum, with its 40,000 items that span over 1,500 years of history, is nearby. Return to the hotel for something more up-to-date including a fully equipped gym, indoor swimming pool, steam room and virtual golf.
More info 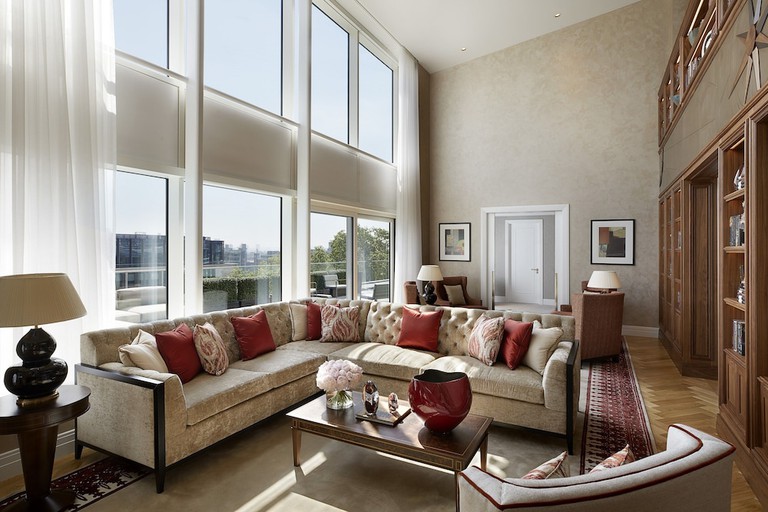 Courtesy of Four Seasons Hotel London at Ten Trinity Square / Expedia
View Rooms
Price Drop
Now from $795 per night
Once the headquarters of the Port of London Authority, Four Seasons Hotel London at Ten Trinity Square is housed in an impressive 1920s building fronted by four huge columns. If the Grade II listed Art Deco building seems indestructible, that’s because it pretty much is, having survived being bombed in 1940. The damage caused to the ground floor led to a refurbishment including the rotunda, which is home to the hotel’s most striking interior feature – a dome that looks like a pink, glowing jumbo jet engine.
More info 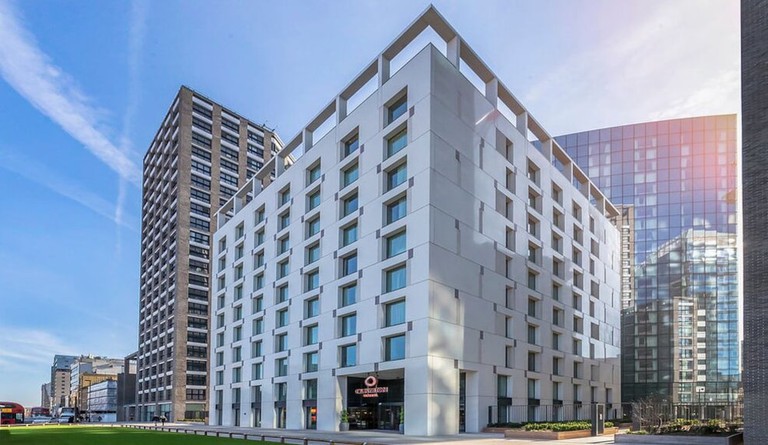 Courtesy of Clayton Hotel City of London / Expedia
View Rooms
Price Drop
Now from $140 per night
Though it’s a stylish and contemporary hotel, the Clayton takes its inspiration from Victorian textile warehouses – a nice homage to the dockside activities of the past. The hotel’s proximity to the Tobacco Dock (which has a number of spaces for hire), the O2 Arena and the ExCel Centre mean it’s popular with those in town for events. Be sure to enjoy the afternoon tea and prosecco deal at the restaurant.
More info 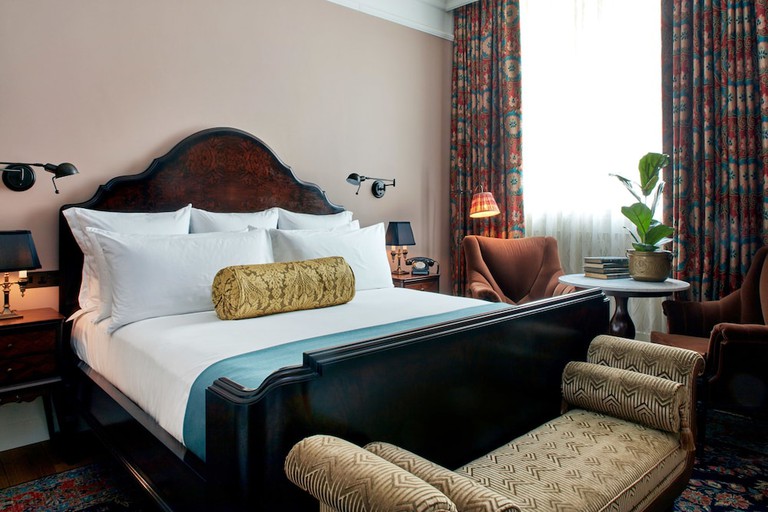 Courtesy of The Ned / Expedia
View Rooms
Price Drop
Now from $358 per night
The larger-than-life Ned used to be a bank though there’s more fun to be had here these days, especially around the members-only rooftop pool, which has eye-popping views of St Paul’s Cathedral. The hipster vibe is enhanced by retro bathrooms and phones, Pilates studios and a barbershop that specialises in beard shaping.
More info 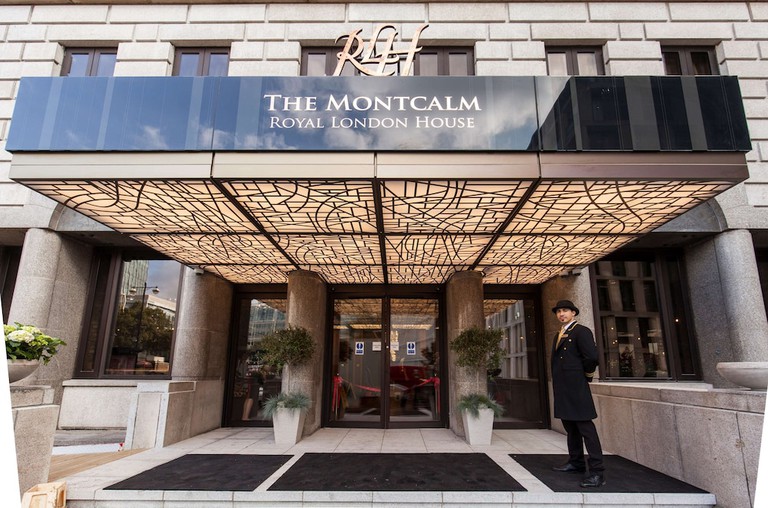 Courtesy of Montcalm Royal London House - City Of London / Expedia
View Rooms
Price Drop
Now from $203 per night
The former head office of the Royal Mail, Montcalm Royal London House marks the point where London’s business and creative sides meet. To the south, you’ll see the towers of the city and to the north is Shoreditch, one of the biggest hipster hangouts in town with galleries, cool bars and an ever-changing display of street art. The hotel retains its 1950s style while adding some 21st-century tech throughout.
More info
Give us feedback