The Best Hotels near the Tower of London and Tower Bridge 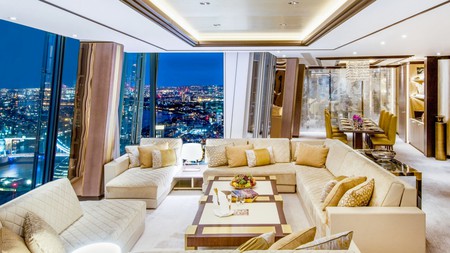 Home to the Crown Jewels and regally-clad Beefeaters, it’s no wonder the Tower of London is a must-visit attraction. Nearby Tower Bridge is equally as impressive. Stay at one of these top hotels in the capital’s historic hub, bookable now via Culture Trip.

The sight of the Tower of London would have stricken fear into the hearts of prisoners approaching their fate at the city’s most infamous prison. Now, it’s an unmissable destination on the London tourist trail, along with its neighbouring bridge. We’ve hand-selected a clutch of hotels close to these top sights, as well as the River Thames and the trendy East End. You couldn’t be better connected to the beating heart of the capital. 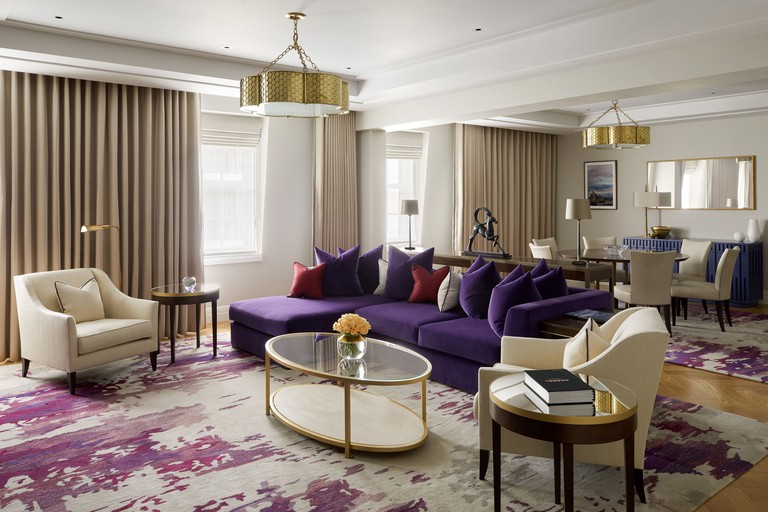 Courtesy of Four Seasons Hotel London at Ten Trinity Square / Expedia
View Rooms
Overlooking both the Tower of London and the Bridge, this luxurious hotel is perfectly placed to access London’s best attractions. It’s as palatial and plush as any Four Seasons hotel. Take advantage of the superb concierge service to secure your table at the best restaurants in the capital, as well as an exclusive, behind-the-scenes trip to the Tower.
More info 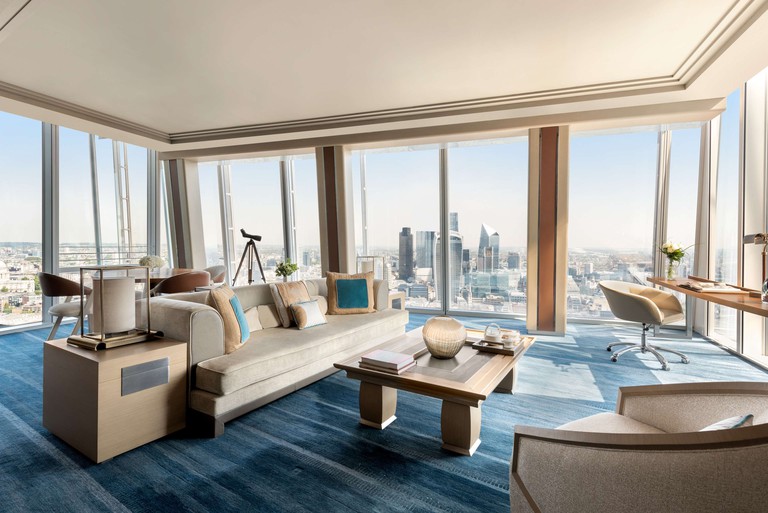 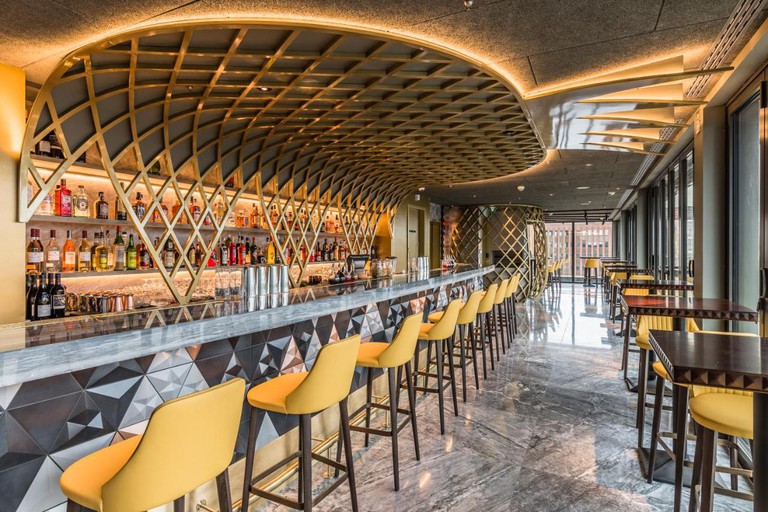 Courtesy of Dorsett City London / Booking.com
View Rooms
The Dorsett is at the gateway to London’s East End, as well as half a mile from Tower Bridge. Distinct Chinese design elements blend with the modern steel-and-glass building. Soak up the views from the rooftop Skybar with a G&T, then head down to dinner at Shikumen Luxe, the on-site modern Chinese restaurant. Keen shoppers will enjoy the hotel’s proximity to Borough Market, Columbia Road Flower Market and Spitalfields Market.
More info 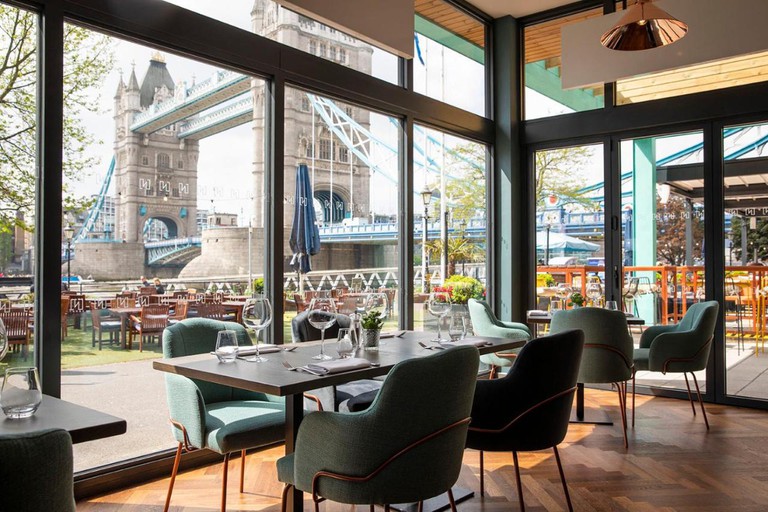 Courtesy of The Tower Hotel / Booking.com
View Rooms
As the name suggests, Tower Bridge is directly opposite this hotel, located on the north bank of the Thames. Order a cold glass of white and cosy up by the outdoor firepit as you watch boats drift along the river. You can even take to the water yourself – jump aboard one of the Thames Clipper boats and speed off upstream to the Tate Modern and Tate Britain for a cultural day out.
More info 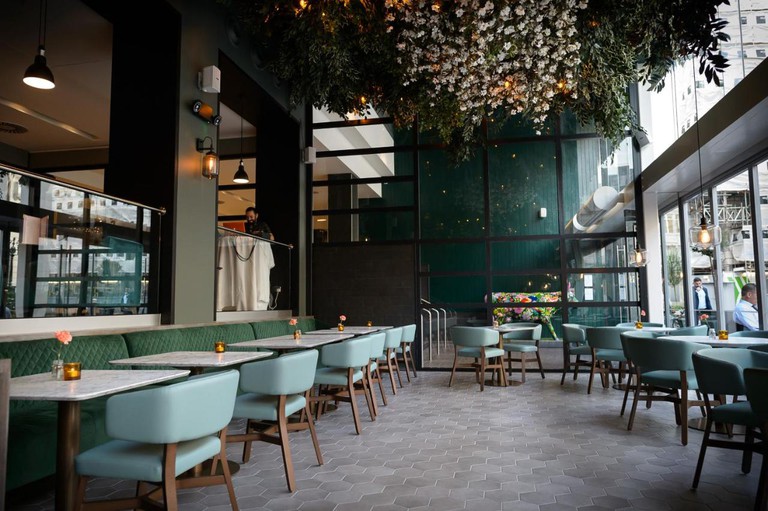 Courtesy of Apex City of London Hotel / Booking.com
View Rooms
Immerse yourself in the capital’s frenetic buzz at the Apex City hotel, slap bang in the middle of historic London and close to Tower Hill. Highlights include the excellent destination restaurant on site, the Lampery, which serves artfully presented international dishes. Once you’ve finished exploring for the day, bed down in one of the minimalist Scandi-style rooms. Still got energy to burn? The hotel gym is open 24 hours a day.
More info 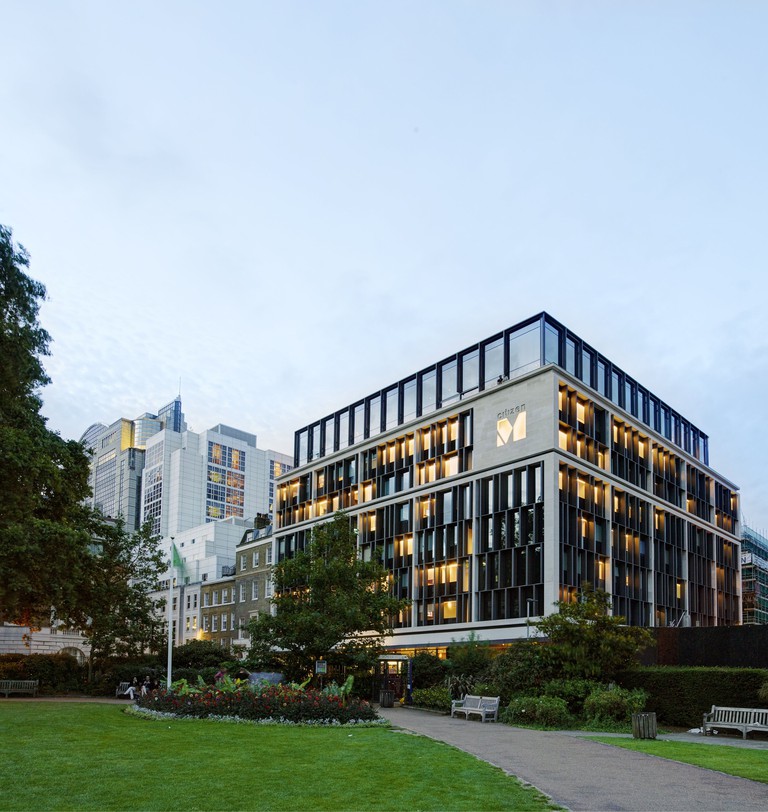 Courtesy of CitizenM Tower of London / Expedia
View Rooms
The Tower of London is directly in front of the hotel, so you don’t even have to get out of bed to tick off a major landmark. Extra-large king beds come as standard here, as well as blackout blinds for a good night’s sleep. Tower Hill station is directly beneath the hotel, so travelling anywhere in the city is a piece of cake. The seventh-floor CloudM bar offers both sensational views and superb cocktails.
More info 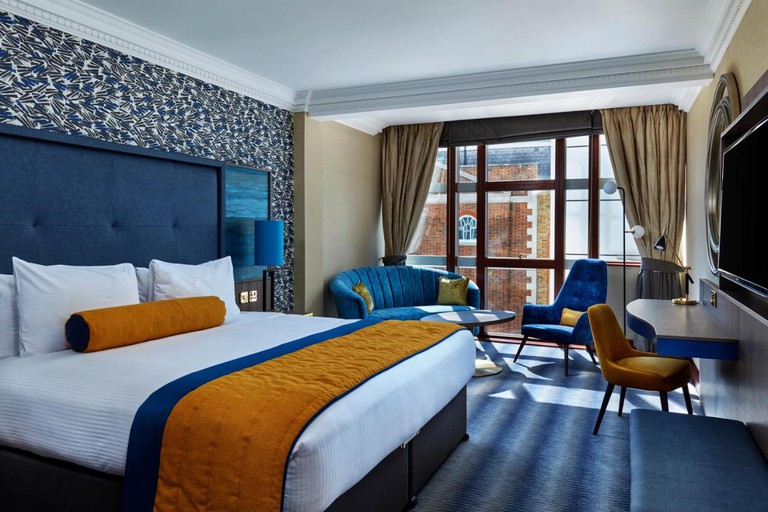 Courtesy of Leonardo Royal London City / Booking.com
View Rooms
Not many London hotels can boast a 25-metre indoor pool, especially not in the City – but the Leonardo Royal can. Their Rena Spa also offers both steam and sauna rooms, a fully equipped gym and an indulgent range of treatments. Alternatively, hit up Leo’s Bar for a different kind of relaxation – they do a great blood-orange daiquiri. Once revitalised, head to Tower Hill, a three-minute walk away.
More info 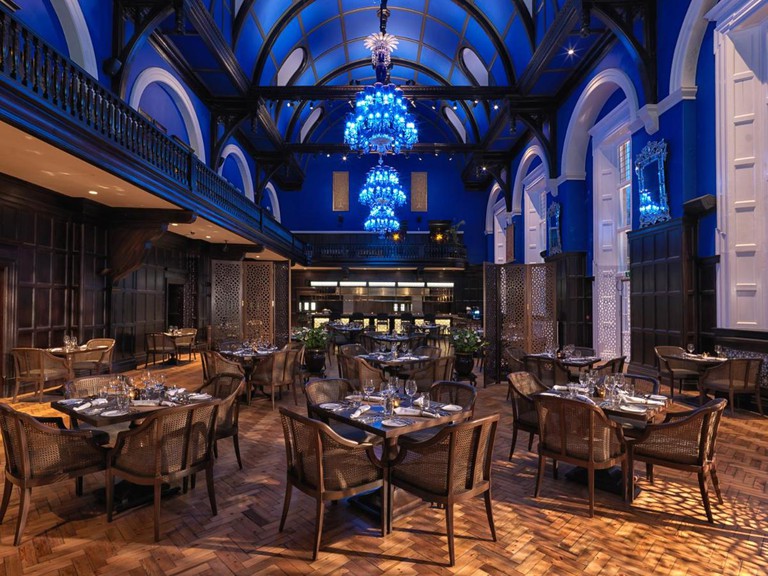 Courtesy of The LaLit London / Booking.com
View Rooms
Until 1967, this building was 180-year-old St Olave’s Grammar School. Today, the Indian-inspired boutique hotel has artfully managed to maintain many features of this Grade II-listed building. Stay in a Cosy, Junior or Senior Classroom, or even the Headmaster’s old room. Dining in the former Assembly Hall, now rechristened the Baluchi restaurant, is a special experience – savour perfectly executed contemporary Indian dishes under the vast vaulted ceiling.
More info

Alternatively, opt for a holiday apartment for a more independent stay, or there are plenty of cheaper hotels in London – bookable now with Culture Trip. If you’re on a budget, check out how to spend 48 hours in London the cheaper way, or experience an unusual side to the city. All of this before tucking into some classic British favourites, of course.