The Best Hotels in Bloomsbury, London 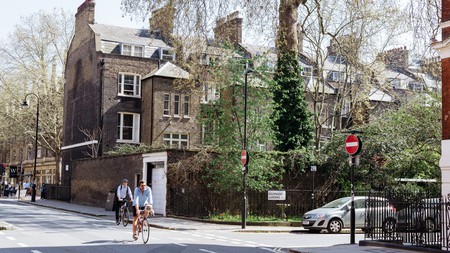 Bloomsbury is filled with musky bookshops, prestigious universities and distinguished, centuries-old buildings, and the cultured character of this leafy neighbourhood oozes out of its many excellent hotels. Culture Trip has rounded up the top places to stay in London’s literary and intellectual capital.

You might recognise this neighbourhood’s name from Bloomsbury Publishing, the only company to have given JK Rowling’s Harry Potter the time of day; or the Bloomsbury Set, a crew of influential 20th-century British intellectuals. Or you might have spotted the name in the biographies of Charles Dickens, Charles Darwin, Vladimir Lenin, Mahatma Gandhi, Bob Marley or Ricky Gervais, who all lived here. Bloomsbury also boasts some excellent hotels in its assortment of genteel Victorian, Edwardian and Georgian properties – this is Culture Trip’s pick of the bunch. 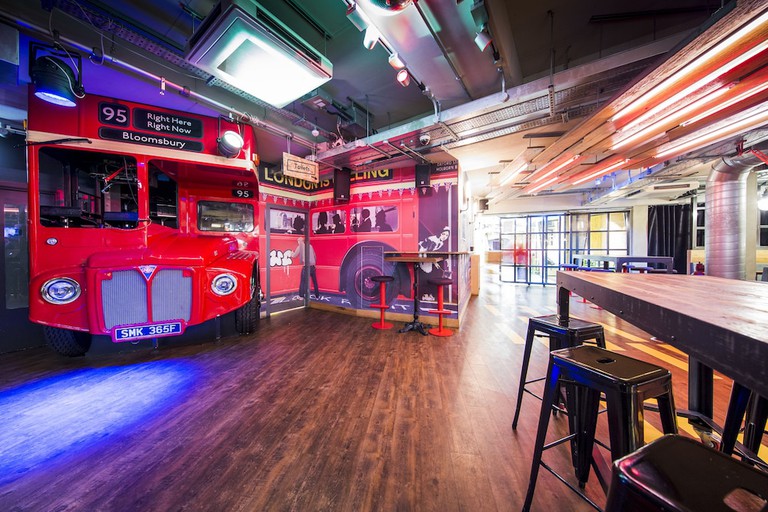 Courtesy of Generator London / Hotels.com
View Rooms
From $21 Per night per room
Travelling with a group or on a budget? This slick hotel close to King’s Cross doesn’t compromise on style or location, situated in a former police station within walking distance of Camden Town. Exposed brickwork, bold graphics and reclaimed timber give an industrial feel while the mix of private rooms and mixed or female-only dorms suits everyone. Meet other travellers at the hotel’s buzzing bar which has resident DJs, drink offers and an authentic London Routemaster bus next to the dance floor.
More info 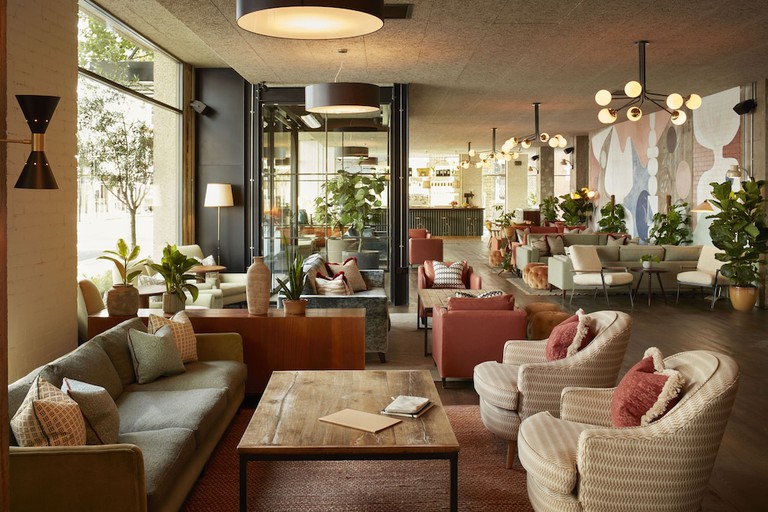 Courtesy of The Hoxton Holborn/Hotels.com
View Rooms
Right on High Holborn and close to Covent Garden, hipster haven the Hoxton is popular with creatives who love its urban glamour, buzzing lobby and all-day bistro. Rooms in this former telephone exchange have parquet wooden floors, Roberts radios and distressed leather armchairs. Artwork is by students at the nearby Central Saint Martins art college while the wallpaper features quirky illustrations inspired by Charles Dickens, who once lived just down the road.
More info 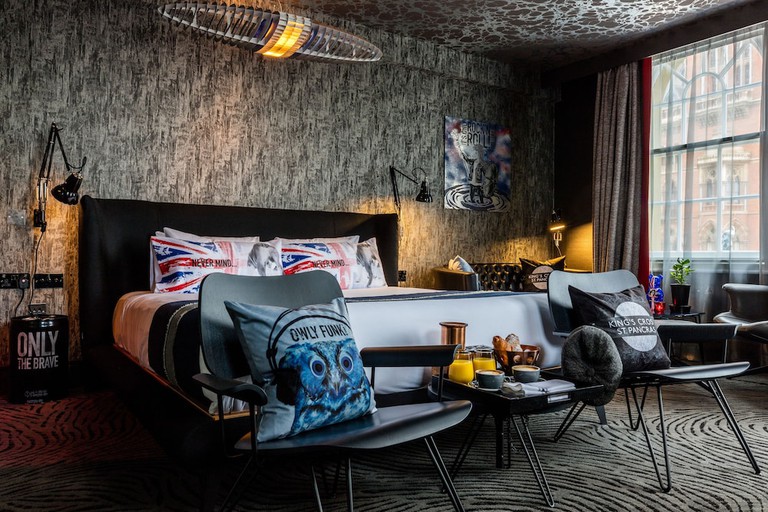 Megaro Hotel | Courtesy of Megaro Hotel / Expedia
View Rooms
The Megaro doesn’t do bland and ordinary – the Kings Cross hotel stands out like a sore thumb with its brightly-coloured exterior. The rooms are modern and simply furnished, though the suites are outright party pads themed on wine, space travel and punk. Be sure to help yourself to snacks and cocktails from the world’s largest hotel minibar in the lobby.
More info 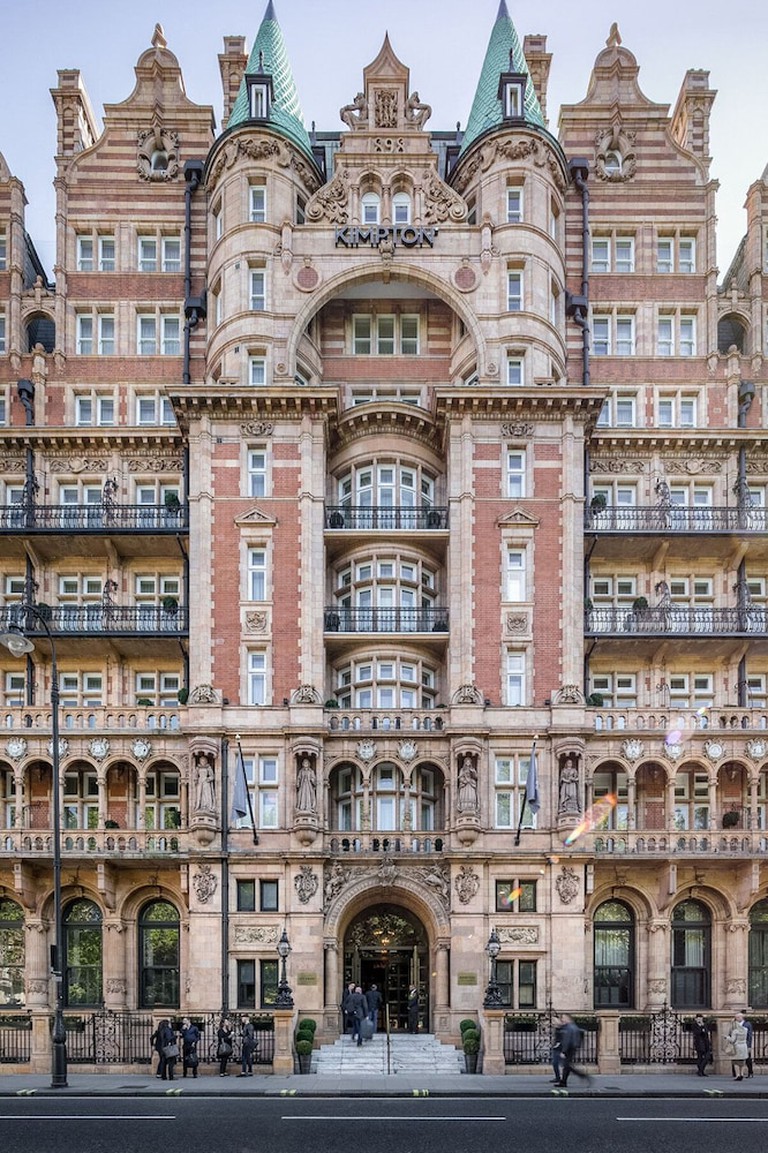 Life-size statues of four British queens welcome guests to this five-star hotel, fit for the Queen herself. Built as the Hotel Russell in 1898, this grand dame feels like a palace from the moment you step into its marble-walled and mosaic-floored lobby. Occupying an entire block overlooking Russell Square, local designers have put their stamp on the chic contemporary interiors of its 334 rooms. Think earthy tones, four-poster beds and sleek suede touches complemented by a scattering of greenery and vibrant botanical cushions. When you’re done admiring your room, channel your inner royal with afternoon tea at Palm Court next to the ivy-laden trellis. 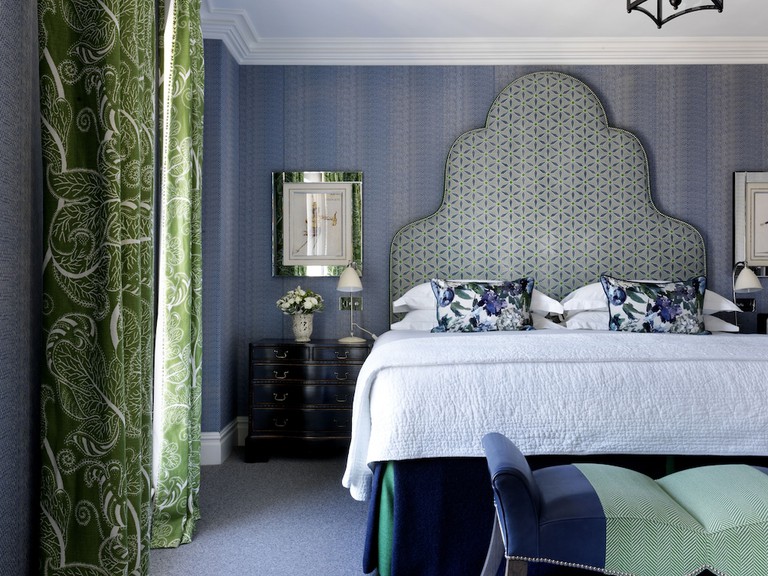 One of interior designer Kit Kemp’s ever-growing collection of Firmdale Hotels, Charlotte Street draws its inspiration from the Bloomsbury Set – a group of 20th-century intellectuals including Virginia Woolf, EM Forster and John Maynard Keynes who once called this neighbourhood home. That means artworks by Woolf’s sister Vanessa Bell hanging on the walls, cuddly armchairs in the drawing room and library, a 67-seat cinema screening nightly films plus all the elegant boutique furnishings you’d expect from a designer with Kemp’s reputation throughout the 52 rooms and suites. Expect prices to match. 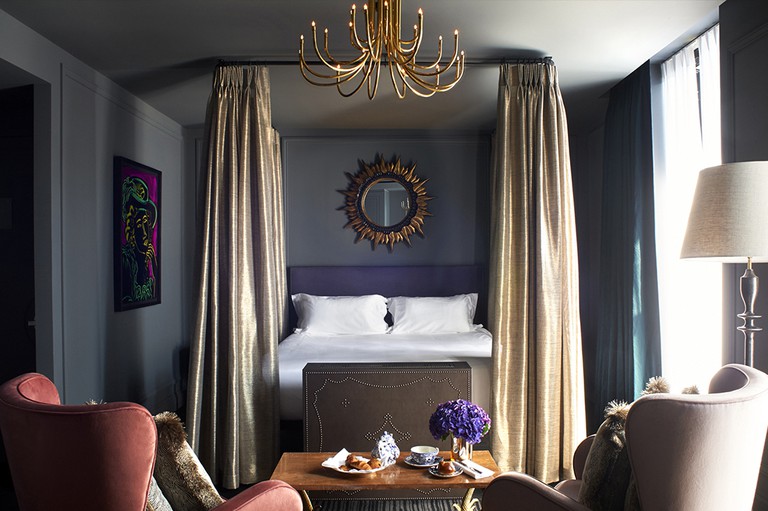 If there’s a more Instagrammable hotel in London, please tag us. This red-brick townhouse sitting on Newman Street between Goodge Street and Tottenham Court Road offers little clue to the urban oasis hiding behind its doors, with three storeys of jasmine and passion flowers trickling down upon the wooden shack-style Jurema Bar and the adjoining glasshouse apothecary. Everything about the Mandrake is excessive – priceless Salvador Dalí paintings, ethnobotanical cocktails in the Waeska Bar, plus rainforest showers and hot tubs under retractable roofs in the 34 lavish rooms, suites and penthouse. 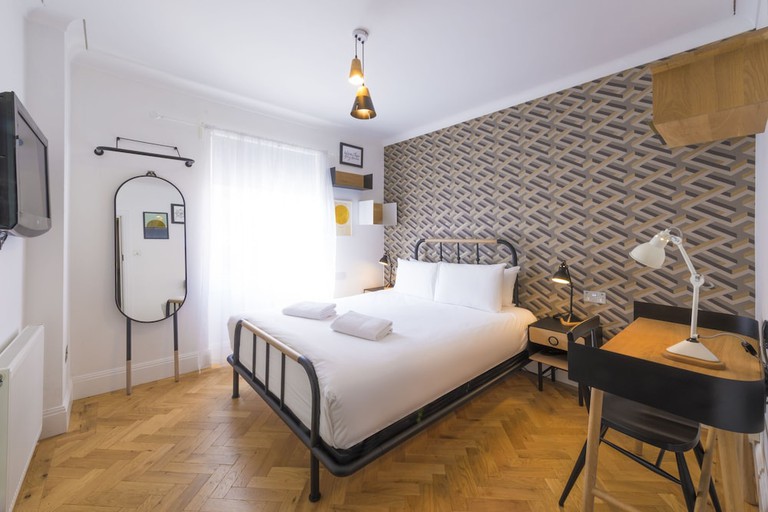 Rooms at the California are decidedly reasonable by London standards. But unlike many of the capital’s dingy cut-price stays, this budget hotel has all the style of an expensive boutique. The 60 spacious rooms feature bespoke floating beds, vibrant wallpaper and hardwood floors, while the speakeasy Megaro Bar and the steampunk-inspired Minimix wouldn’t look out of place at a hotel with triple the price tag. The location on the doorstep of King’s Cross railway station is another big plus.

The Montague on the Gardens 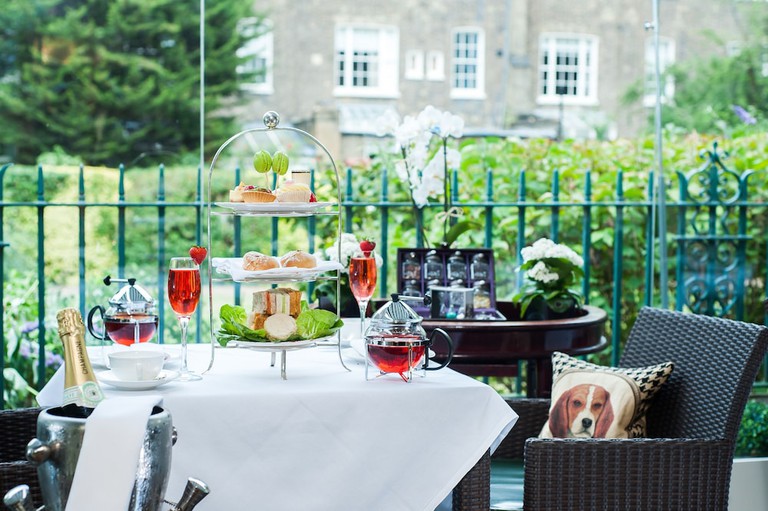 Bordered by Russell Square, Bloomsbury Square Garden and a serene private eden, it’s not hard to spot the inspiration behind the name of this hotel. A quaint Georgian townhouse that counts the British Museum among its neighbours, this four-star property blends in nicely with its oh-so-British surroundings. The 100 rooms are uniquely thematic – furnished with a regal mix of mirrored cabinets, pinstripe wallpaper, elaborate headboards and copper baths. Throughout the year, the hotel caters to the seasons with fitting pop-ups: get toasty with tartan blankets and mulled wine at the quaintly vintage ski lodge, or transport yourself to the Caribbean with a coconut cocktail at the summer beach bar. 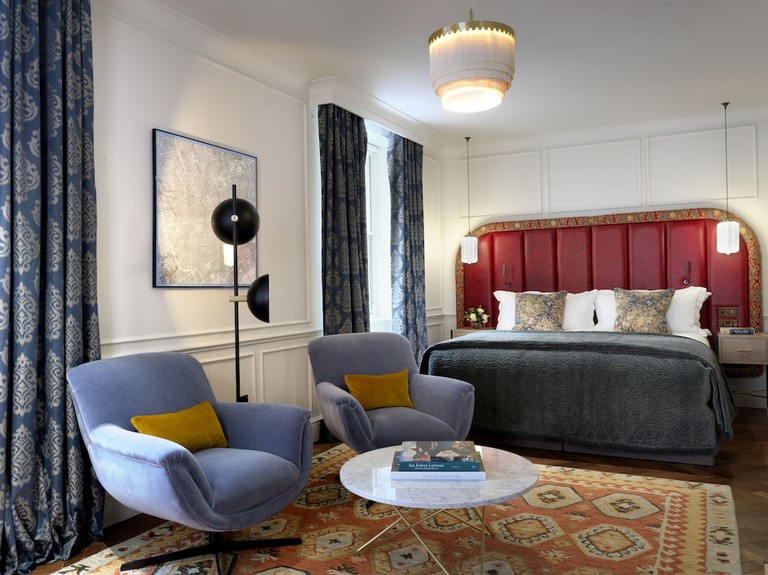 This red-brick building was constructed in 1928 before being hauled into the new millennium by acclaimed Swedish architect Martin Brudnizki – but the Bloomsbury lost none of its jazz-era charm in the upgrade. We’re talking boldly patterned wallpapers, ostentatious chandeliers and art deco touches sprinkled throughout the 153 rooms. The hotel’s over-the-top Coral Room – a marble bar straight out of the Roaring ’20s – shimmers from breakfast at dawn until cocktails at dusk. 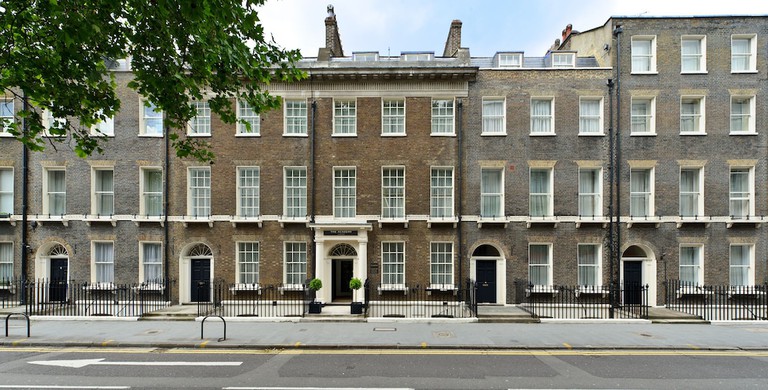 Sitting on bustling Gower Street just north of the British Museum, the Academy stitches together five Georgian Grade II-listed townhouses dating back to 1776 into one of London’s most sophisticated boutique hotels. It has been renovated by YTL Hotels to become a member of the prestigious Small Luxury Hotels of the World collection, and New York studio Champalimaud Design has peppered the property with nods to the Bloomsbury Set, especially the Woolf and Forster novels found in the cosy library. 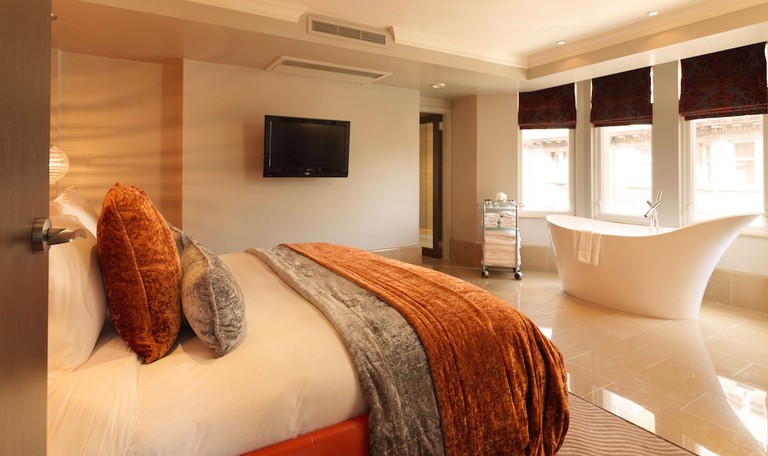 Another masterpiece of the ornate thé au lait (“tea with milk”) terracotta architecture that’s so common around these parts of London, this Radisson puts a very contemporary twist on a stately old structure. While the rooms themselves are conservative, modern design infuses the common areas, from the eye-catching installation of pages from Virginia Woolf’s Mrs Dalloway in the lobby to the striking red and black motif running through the Steak & Lobster restaurant. Sandwiched between the British Museum and the West End theatre district, the hotel also offers reasonable rates for the area. 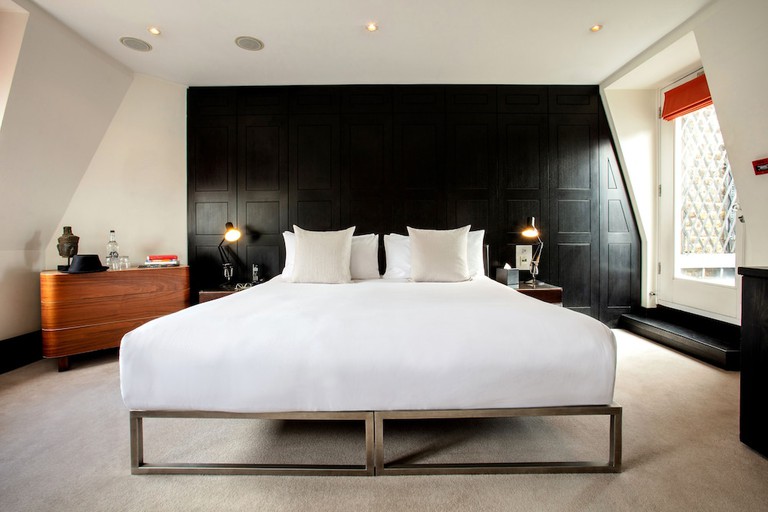 My Bloomsbury keeps things contemporary with chequerboard tables, tea-green sofas and lots of natural materials. The 86 rooms are neutral and stripped down, but offer thoughtful touches such as a writing desk, Penguin books and eco-friendly Pure Lakes toiletries. If you’re looking for something special, go for the sprawling loft penthouse – complete with a kitchenette for budding cooks, a shared suntrap terrace, book-laden shelves and a brown leather sofa that practically invites you to get lost in a story or two. When you get peckish pay a visit to Gail’s Kitchen for coffee and cake.