The Best Flea Markets for Design Lovers in London 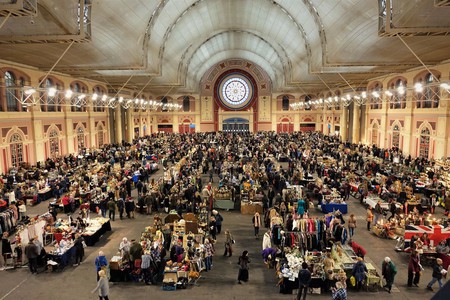 There’s a plethora of flea markets dotted among London’s crooked and winding streets – offering everything from Art Nouveau mirrors to 1980s film cameras and Modernist chairs. By steering clear of the Big Smoke’s copious pricey shops (‘Nothing in London is certain but expense,’ the poet William Shenstone once wrote), there are bargains to be found, too. Here’s our pick of the 12 best flea markets for design lovers in the capital.

Market, Shop
Facebook
Email
Twitter
Pinterest
Copy link
Share
Map View
Deptford is an exciting place to be right now, but with developers moving in on the area, it’s good to keep things real. Head down Douglas Way to shop at this centuries-old market, one of south London’s busiest, offering a range of bric-a-brac, antiques, secondhand clothes and collectibles. To catch the full range of what’s on offer, get there before midday as some stalls pack-up early. Afterwards, go to Deptford Market Yard just around the corner. Recently redeveloped to designs by Pollard Thomas Edwards, it offers a range of independent shops, bars and restaurants contained in 14 old railway arches.

Every Wednesday, Friday and Saturday from around 7am to 4pm.
Open In Google Maps
Deptford Market Market Yard, Deptford, London, SE8 4BX, United Kingdom
+2078284777
Visit Website
Give us feedback 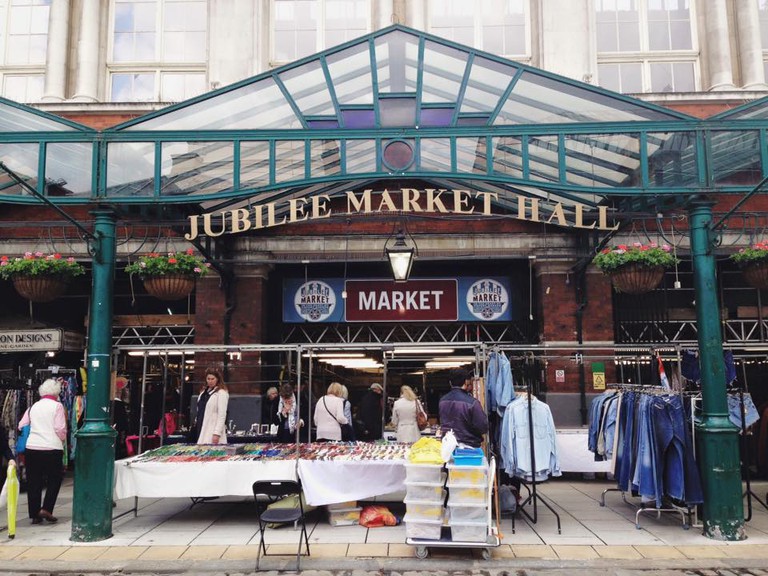 Antiques and Collectables Market in Covent Garden | Courtesy of Jubilee Market Hall
Have a browse in the Antiques and Collectables Market, which is a refreshing break from the monotony of chain shops in Covent Garden. Housed in the Jubilee Hall, this Victorian building was completed in 1904 but restored in the 1980s. The nifty market is open all week, but dedicates Monday to selling antiques. Don’t be deceived by the outside entrance area, as there is plenty more inside. Also worth a trip nearby are the Apple Market in the 19th-century Covent Garden Market building, which also sells collectables on Mondays, and Inigo Jones’s Palladian-style St Paul’s.

Technically this is a shop and not a flea market, but anybody into design should take a trip this ‘cave’ of curios. The self-described shop of ‘thrifty finds, reclaimed doors and architectural salvage’ is packed with hanging chandeliers, sinks, antique fireplaces, Victorian radiators, and other reclaimed goods. The store itself is a landmark in the south London roadside, with the entranceway made up of stacks of second hand furniture and creepy mannequins. 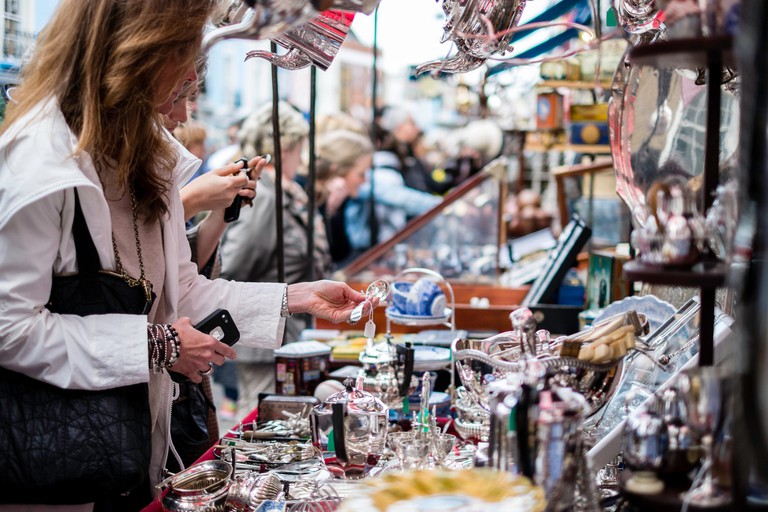 © Gregory Wrona / Alamy Stock Photo
Oh, Portobello Road Market – Paddington Bear’s favourite stomping ground and the setting for the 1999 film Notting Hill. Among the hodgepodge of brightly-painted Victorian homes and shops, this half-mile stretch – billed as the world’s largest antiques market – is packed with more than 1,000 dealers selling a wide range of collectables, including typewriters, old coins, retro cameras, vintage clothes and tea sets. The best day to visit is Saturday, when whole market is open, but stalls are set-up everyday except Sunday.

Every Saturday – it’s best to visit before 11:30am as the market can get very busy.
Open In Google Maps
Portobello Road, London, England, United Kingdom
Visit Facebook page
Give us feedback

This fair brings together more than 300 antiques dealers within the walls of the historic, Grade II-listed Ally Pally. It costs to enter – £12 before 9:30am and £6 afterwards – but there are great deals, with vintage clothing, ceramics and jewellery sold at competitive prices. Don’t be afraid to haggle.

The next fair will be on 18 February. For more dates visit here. 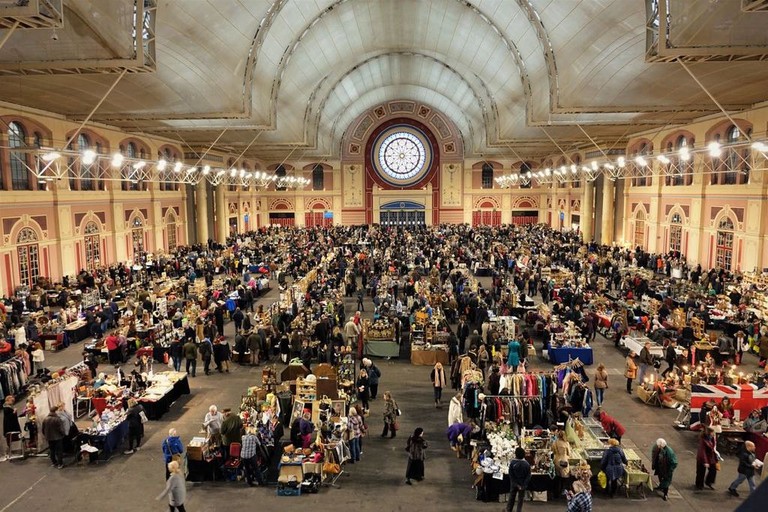 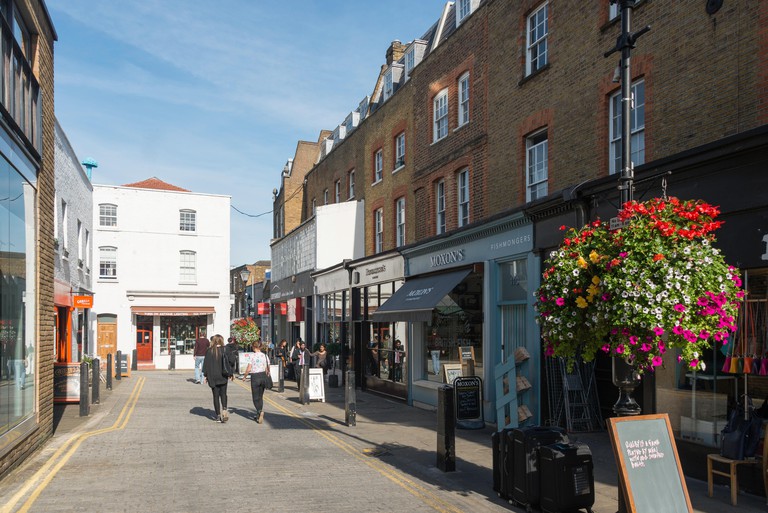 Building, Market
Facebook
Email
Twitter
Pinterest
Copy link
Share
Map View
Each week a community of antiques specialists bring their prime vintage stock to this market in the heart of trendy east London. Housed in a restored Grade II listed Victorian building, more than 80 stalls sell designer furniture, maps, jewellery and clothing. The market is hugely popular so get there early (around 8am) to see the finest goods on offer.

Market
Facebook
Email
Twitter
Pinterest
Copy link
Share
Map View
This Bermonsdey gem is another antiques market where the top bargains are to be found in the early morning. Nestled beside a car boot sale, this market has been going since the 1950s (although it has moved from its old spot in Caledonian Road) and the antiques traders here have good knowledge. The market’s eye-watering 6am start is allegedly a reflection of the ancient law of marché ouvert,abolished in 1995, when stolen goods were legally allowed to be sold between sunrise and sunset.

Modern Shows – a favourite among architects and designers – was set up after a one off show by founders Petra Curtis and Lucy Ryder Richardson nearly sold out in its first day. The small business runs several shows, each comprising a carefully curated selection of mid-century modern furniture and other 20th-century design classics, including wallpaper, ceramics and cushions. The next London show, called Mid-century Modern, will be held in Dulwich College, mainly in the Brutalist-designed Christison Hall, in March. 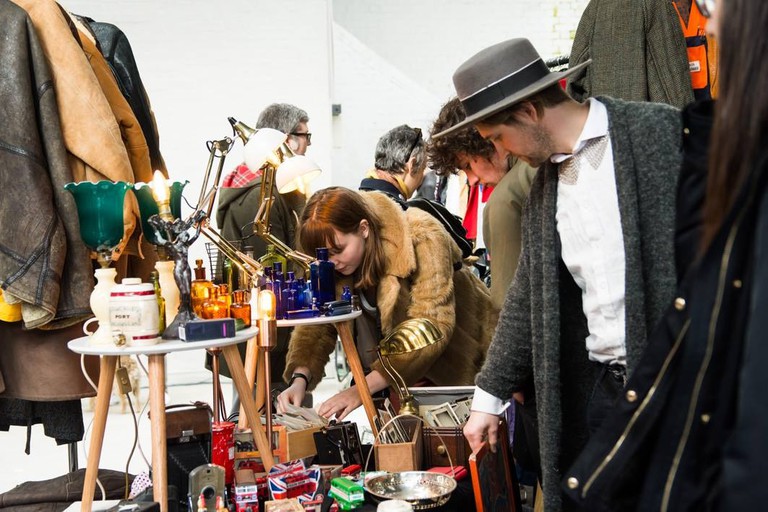 This monthly market in Stoke Newington Church Street boasts more than 30 handpicked vintage traders – and there are plenty of independent shops and cafes nearby, too. Rummage through 20th-century furniture, vinyl records, French homeware, and Danish décor. The organisers run another monthly event, The Big London Flea, in a nearby former ABC cinema, which offers a wider selection of vintage goods and is also worth a visit.