The Art of London: Three Artists Show the City’s Creative Side

Ahead of Frieze Week 2019, Culture Trip speaks to three artists whose work has been shaped by their experiences of London, and whose work, in turn, reshapes our understanding of the city.

It’s impossible to define the art of a city like London. It’s a heaving megalopolis, constantly changing, multifarious and multicultural. Artists have been a lifeline in London, creating in the best and worst of times, creating in the thick of it all. Artists are the city’s most incisive observers – and often its fiercest critics. It is artists who can see the worst and imagine a better future.

As London welcomes the international art community for Frieze Week, we explore the city from the perspective of three artists. London-born Shezad Dawood, a sculptor, filmmaker and painter who draws on his mixed Pakistani, Indian and Irish heritage, tells us how Hackney Wick’s artistic community has evolved since the 2012 Olympics. Camille Walala, a designer whose art has transformed East London’s grey skyline with optimistic colour, still visits the Broadway Market café that gave her her first job when she moved to the area 15 years ago. She explains how getting to know her local community has helped her build her career. For painter Joy Labinjo, Brixton is a constant source of inspiration, from the characters at her hairdresser to the Black Cultural Archives. It’s proof that London is full of surprises everywhere you look – and that what really makes the city is the people who live in it.

Growing up, I didn’t feel othered: I went to a mixed school, and I lived in a mixed area in Dagenham, where I called everyone Aunty and Uncle and our house was a revolving door of family and friends. Community for me is having people around you who love and support you. When I moved to Brixton, it felt right: it’s vibrant, multicultural – I love that I don’t have to leave here to get what I need. There’s so much energy. I get off the bus around 7am – it drops me outside Morley’s – and I go to Balance on Ferndale Road, a place that does amazing coffee, run by Ali. On a normal day I try to get in just after it opens. I usually take a packed lunch to the studio, which is on Hargwyne Street, but if I want a treat I might get some Caribbean food from Refill on the corner past McDonald’s. I’m usually in the studio for 12 hours a day, but I might go out and meet friends later on for a drink at SW9 Bar during happy hour. Brixton Jamm is a really good night: when you walk in, it might seem like a group of people who don’t go together, but everyone has a good time. 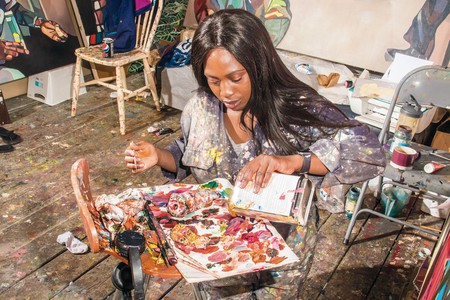 I love the art in Brixton: the Aliza Nisenbaum mural at the station and the mural of Michelle Obama, the iconic “Come in Love, Stay in Peace” written on the bridge. It’s fun to see art happening on the street, when there are so many rules and regulations. Brixton now is definitely a mix of people who have moved in with gentrification and people who have been here forever. Since moving here I’ve discovered the Black Cultural Archives, which has exhibitions and a nice café. Sundays in Brixton are amazing, when people are dressed up to go to church, and the market is also full of scenes that I’d like to incorporate into a painting one day. There’s also a woman at my hairdresser’s who I’d love to paint. You see her a mile off: she’s got a beehive, and every braid is a different colour. The whole experience at Unity – a unisex salon – is amusing; it takes the whole day, and appointments and price lists don’t exist. 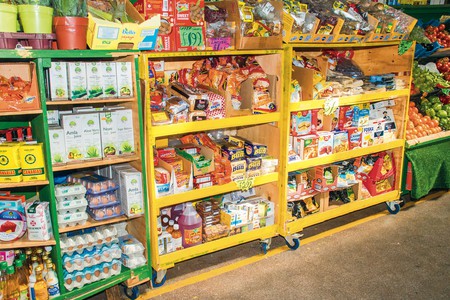 As well as catering to a diverse array of cuisines, Brixton Village Market provides Labinjo with scenes she’d like to capture in future paintings | © Alexander Coggin / Culture Trip

I’m running out of the family photographs I usually paint from. I still want to represent black figures – and I want to do other things too – but that’s really important to me, especially in the current times. Things still aren’t where they should be in terms of race and representation. I think Brixton is about to play a much bigger role in my source material. 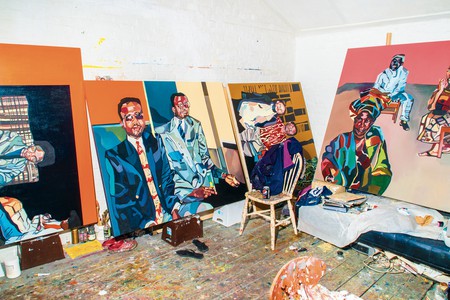 Family photographs have provided Labinjo with source material for much of her work; however, she predicts the people of Brixton will soon take over as her main inspiration | © Alexander Coggin / Culture Trip

A very Brixton moment for me was on a hot, sunny day this summer. A man was pushing a trolley with cooled beers, and another had opened up his car with a makeshift bar inside, near the barber’s on Ferndale Road. A group of black men standing in the street, having a good time. That’s Brixton. It definitely feels like home, and where I’m meant to be. 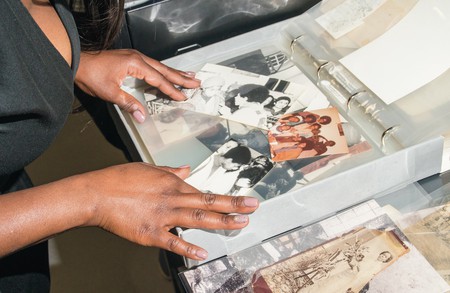 I moved to London in 1997 and to East London a few years after I arrived. Everyone I know still lives here. I can walk from my home to the studio then to a restaurant or the park – I love that so much. I travel a lot, so when I’m here I want everything to be within biking distance. I have my routine: at 7 we’re the first customers at E5 Bakehouse, a place that is run with such a warm intention. I like to bike around Victoria Park or go for a walk. I don’t want to sound lame, but I’m quite hectic, so I like being next to nature – it’s important to clear your mind, be in the now, feel my feet on the ground and hear the birds. Then maybe have breakfast somewhere like Brunswick East or Allpress in Dalston. I also love the Towpath Café, run by this lovely American lady called Laura. It’s only open from April to the end of October, and it’s delicious. When I finish at the studio we often go to Morito on Hackney Road or Ombra on Vyner Street, to see the sunset on the terrace. A lot of my inspiration comes from mundane details I see when I’m walking around: patterns and textures on the floor or buildings, close-up views of door handles, or views that help my compositions. I take pictures of everything. 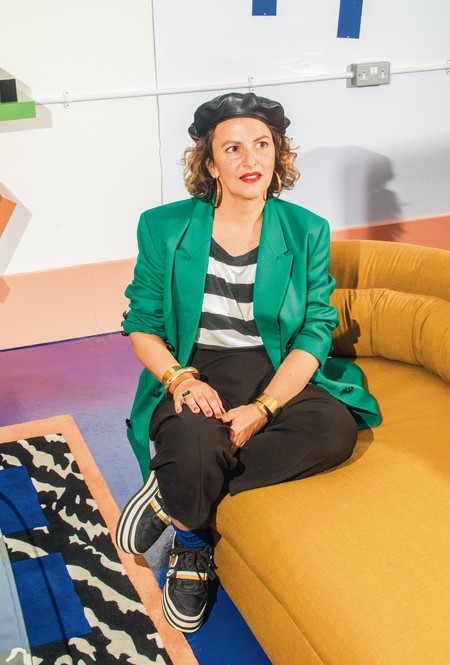 When she’s not travelling, artist Camille Walala’s life is in East London: her home, her studio and her favourite places are all within walking or biking distance | © Alexander Coggin / Culture Trip

When I’m out and about I often bump into people I know and stop to have a chat, which sometimes can lead to new opportunities with work. I never liked the idea of networking, but I’m happy to start talking to the person sitting next to me in a coffee shop. In East London, there’s so many people working in the same field that often it turns into something. The building I painted on Old Street came about after I had coffee with a woman I know, Jenny. Her husband owned the building, and she offered me the job. Jenny also introduced me to Queensbridge Primary School. I’d mentioned that I really wanted to paint a school, and she introduced me to the teachers there. It was a really nice community project, five minutes from my house: the parents would come to help paint after work with their kids. When I want to do something, I always put the word out locally. My dream would be to paint a housing estate. I think that you can make a much bigger impact socially that way. 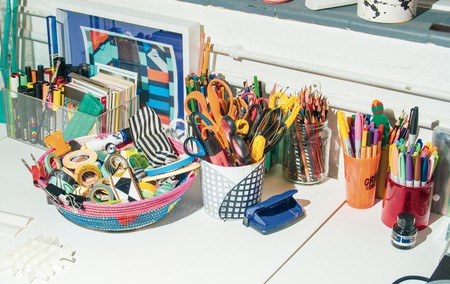 When I finished uni 10 years ago, my first job was at L’Eau à La Bouche on Broadway Market. I remember seeing all these crazy people who would come in there, and I wanted to be like them. Now when I go in there, the younger workers ask about interning for me. It’s funny how things go around – and I’m happy to give someone the chance, because I’ve been there and I know exactly what it’s like to be starting out in London. I’m happy to give back now. 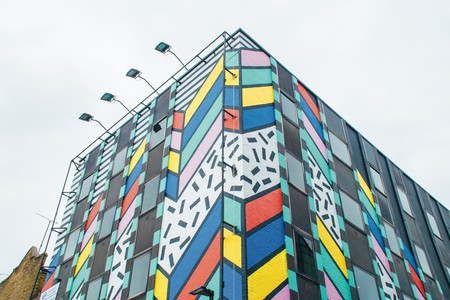 My dad was a photographer, and growing up in his house in West London has been a template for my life and work; there was always an interesting and diverse mix of people there – gay, straight, African, Armenian, West Indian, Jewish, Maltese, painters, musicians and fashion designers. It was a real privilege to see it, and it informs my world view today. The multicultural conversation in London is very different to other major cities’, and it’s easy to forget that it was quite rough if you were of colour. In the 1990s there was no money in the arts, so everyone collaborated, and I think that’s a spirit that has remained. It’s very close to my heart. 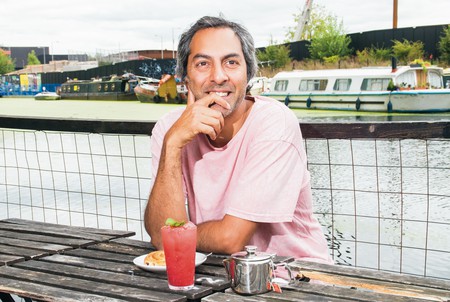 Artist Shezad Dawood has been frequenting Stour Space in Hackney Wick for years; the energy along the canal on which it sits has long been an inspiration of his | © Alexander Coggin / Culture Trip

When I bought a Victorian warehouse next to Victoria Park 20 years ago, people asked me, “Why the hell would you move there?”. Victoria Park then was known for the infamous murder case of the American artist Margaret Muller. Now my studio is a stone’s throw from my house. I was able to buy the space with Haroon Mirza and his partner after many years of perseverance. Haroon runs a residency programme, I have space for mentoring, and we also provide a space for a local bookbinder. 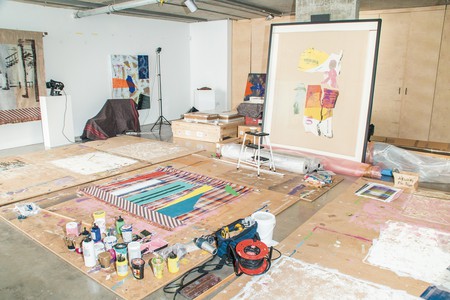 When Dawood bought his studio near Victoria Park 20 years ago, the area was a no-go for even those hardiest of pioneers: London artists | © Alexander Coggin / Culture Trip

I have been going to Stour Space for years; it’s a great location on the canal, and its clientele are mostly people from the community. I enjoy Crate although it functions very differently, and I’ve always liked the Hackney Pearl. When I first started coming to Hackney Wick in the 1990s it had that Mad Max vibe with burned-out cars – you had to walk for an hour and a half to get to a bus stop. But it’s always had underused resources like the parks and the canal. One of the exceptional legacies of the Olympics is the Zaha Hadid swimming pool, subsidised for local residents; I go there with my daughter. The canal network has also always inspired me. I love the energy that permeates the waterways. East London has such a history of counterculture, from William Blake and John Wesley to the female canal and dock workers during the war. There have always been people here working against the norm, and there are still so many traces of that. 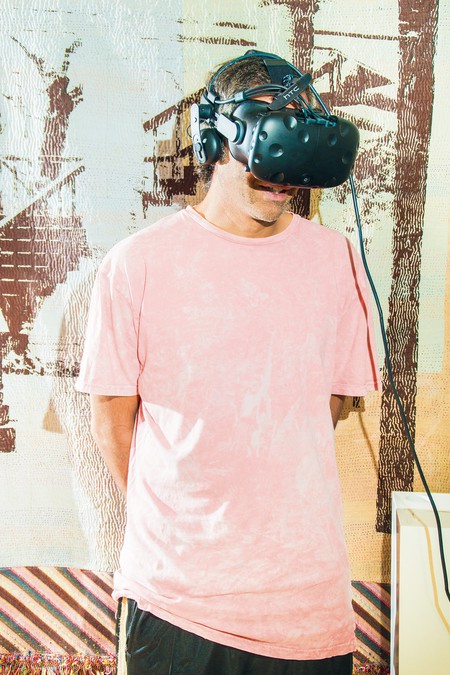 My practice is about collaboration and community, and that has to come into all aspects of my work and life. Things do change, and energies go elsewhere, but we have to create sustainable pockets so we don’t lose important parts of the city that aren’t commercial. It’s a moment where we need to review the social contract we are all a part of – at least that’s my philosophical take on it! The collaborative ethos is still so intrinsic here; there’s a willingness to create before thinking about how we get paid! I think when a city functions in that way it’s at its best. 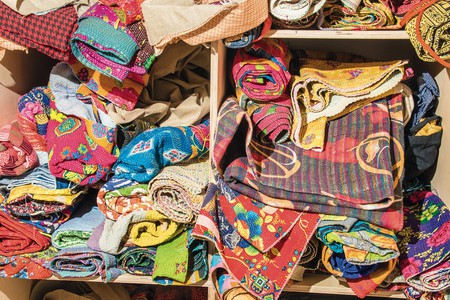