The Best Hostels in South London 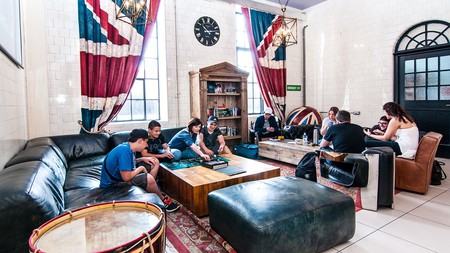 A trip to London often comes with the daunting prospect of splashing out on a swanky hotel, but this doesn’t have to be the case. Floods of hostels are dotted around the Big Smoke, offering an affordable base at the heart of the action.

London has a reputation for being expensive, born not least from royal residents and posh stereotypes, but the real treasures of the capital lie behind its regal facade. Hostels can put you in the midst of old-school British pubs, off-the-wall boutiques and verdant parks, steering you away from the well-trodden pavements and allowing you to experience the city through the eyes of a true Londoner. If you’re keen to stay south of the river, these hostels should be top of your list.

Rest Up London, Elephant and Castle 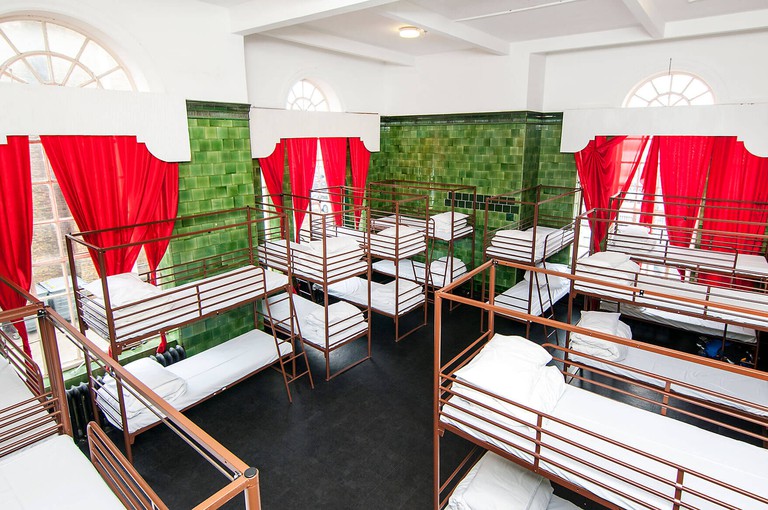 Courtesy of Rest Up London / Hostelworld

Minutes from the reverberating speakers of the Ministry of Sound, this pre-WWI lodging house-turned-hostel hides behind a fringing of greenery in the hectic hum of Elephant and Castle. Rooms are stripped-back crash pads with metal bunks set against glazed-green Victorian Tube tiling and royal red curtains draped across arched windows. As is the case with hostels, the communal areas are a hive of activity. Dotted with leather chesterfield sofas on Persian rugs and hefty British flags, the open space features rows of vending machines to fuel your games of pool or football. Post-pub-crawl hangovers are also remedied with a hearty English fry-up (think crispy bacon and golden hash browns) at the in-house restaurant. 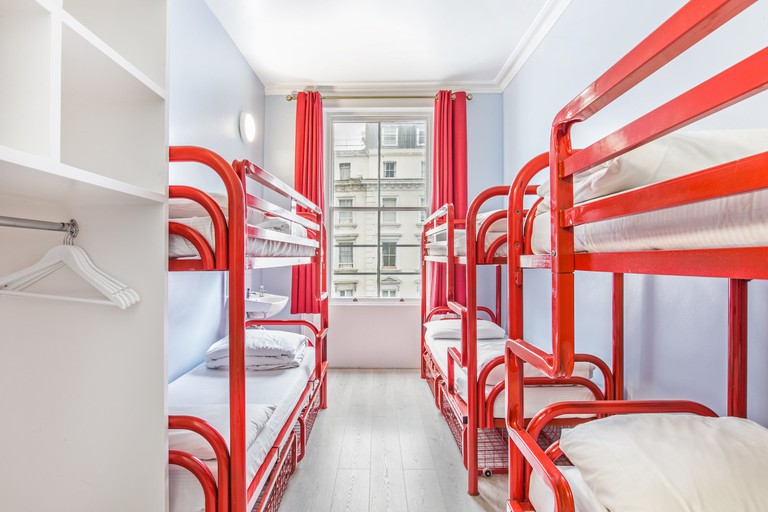 A contemporary hostel looking to fuse the friendly buzz of student living with sleek metropolitan style, Astor Victoria lies just minutes from Buckingham Palace and Hyde Park. The fully-equipped kitchen has all the kitchen kit you’ll need to cook your grub before heading out for a pint of Guinness in old-school British pub the Constitution. If you’re planning a night in, curl up in front of a film on the large projector screen before retreating to the solitude of a private room. The cherry red and pale blue spaces range from small singles to eight-bed dorms with convenient under-bed storage and the option to go mixed or female-only. 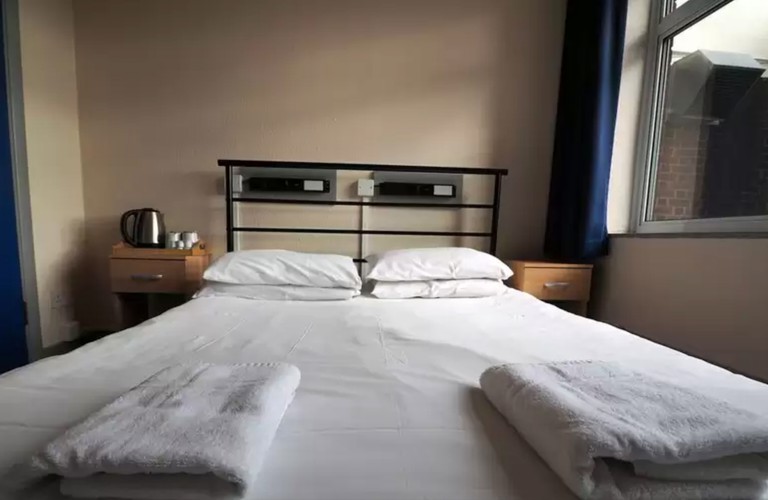 A short amble from the O2 arena, St Christopher’s Inn lets you lose nights in the heady rush of a live gig and spend days exploring the depths of the National Maritime Museum and on board the Cutty Sark. The hostel lies above the sky-blue setting of Belushi’s Bar, an open space with curious upside-down drum-kit lighting and no shortage of entertainment – the place comes alive every night with regular DJ sets, live music and beer pong. Recharge and refuel in the mornings with free wifi and complimentary breakfast before heading out on the walking tour to get a lay of the land.

The Walrus Bar and Hostel, Waterloo

A short wander from well-connected Waterloo station, The Walrus exudes homely hospitality with friendly staff and clean facilities. Fresh minimalist white rooms come with wooden detailing and backpacker essentials such as lockers, free wifi and earplugs. Despite its proximity to the tracks, double glazing helps to reduce the noise from the trains and spirited nightlife outside. Head down to the bar for a truly British night out – its scattering of antique furniture, web of industrial lighting and exposed brickwork all set the scene for evenings spent throwing back shooters into the late hours. 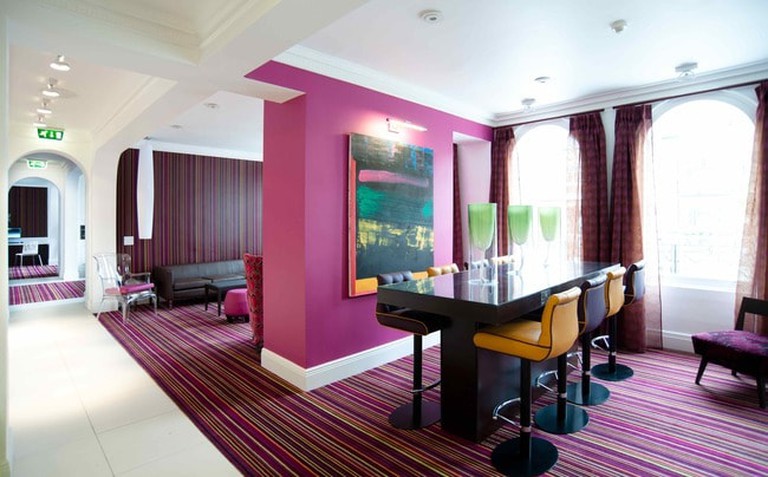 Courtesy of Safestay London Elephant and Castle / Hostelworld
This 18th-century former Labour Party HQ draws in nomads with the promise of a social, easygoing stay in the heart of ever-evolving Elephant and Castle. Mixed-gender dorms can sleep from four to 12 people and glow with bright fuchsia walls and vivid lilac bedcovers. If you’re after a secluded sanctum to escape for the night, the private rooms come complete with the precious commodity of ensuite bathrooms as well as a TV. Find inner peace at one of the regular yoga classes that take place in its red-brick walls, or let loose at Bar 60, which hosts rock nights every Friday. 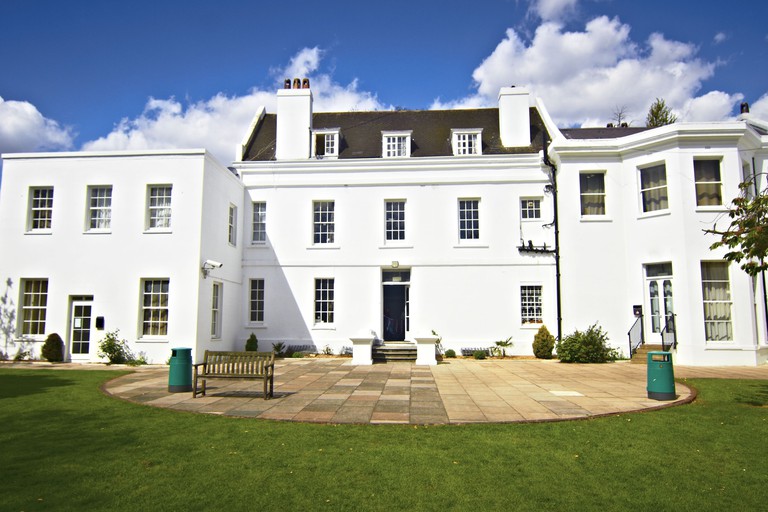 Courtesy of Via Lewisham Hostel / Expedia.com

This restored 17th-century building, in a quiet residential area in Lewisham, houses a hostel brimming with character. Airy communal spaces are bathed in natural light and the plush leather sofas serve as an ideal spot to get stuck into a board game or two. Nautical royal-blue and whites colour the dorms that can range from roomy privates to eight-bed spaces lined with bunks. Security is ensured with lockers, while there’s no risk of your phone going uncharged with USB ports next to each bed. The real treat is the garden, a valuable patch of green in the concrete cityscape providing a welcome breath of fresh air.

Fancy discovering more budget-friendly places to stay in London? Check out our pick of the best hostels to book in London, England, bookable with Culture Trip.